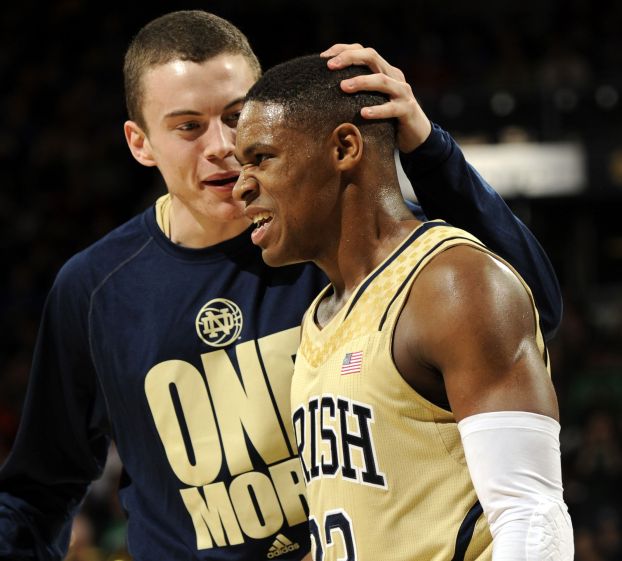 Duke tumbles out of top 10

Associated Press
Breaking down this week’s Associated Press college basketball poll:
GREAT RUN: For the first time since December 2007, Duke is not in the top 10 of The Associated Press college basketball.
The Blue Devils (11-3) dropped from seventh to No. 16 on Monday, following their 79-77 loss at Notre Dame on Saturday.
Duke’s run started with the fourth poll of 2007-08. The Blue Devils were in the top 10 for 122 consecutive polls, the second-longest such run since the poll started in January 1949.
UCLA has the longest top 10 run, a stretch of 155 polls from the start of the 1966-67 season through January 1976.
Only three schools — Arizona, Syracuse and Michigan State — have been in the top 10 in all 10 polls this season.
LEAGUE LOOK: The changes in this week’s poll didn’t affect conference bragging rights.
The new teams this week — No. 23 Illinois of the Big Ten and No. 25 Kansas State of the Big 12 — kept their conferences tied for the most ranked teams — this week it’s five schools instead of four.
Illinois joined fellow Big Ten schools Ohio State, Wisconsin, Michigan State and Iowa in the rankings while Kansas State joined Baylor, Iowa State, Oklahoma State and Kansas of the Big 12.
The Pac-12 and Southeastern Conference are next with three schools each.
The American Athletic Conference and Atlantic Coast Conference had Connecticut and North Carolina, respectively, drop out of the Top 25 and both have two schools still ranked.
BEATING BEST: San Diego State’s 61-57 victory at then-No. 16 Kansas on Sunday was the Aztecs’ third win this season over a ranked team, tying them with North Carolina for the most in 2013-14.
San Diego State hit the Big East hard, also beating then-No. 20 Creighton and then-No. 25 Marquette.
North Carolina, which dropped out of the poll this week, has wins over then-No. 3 Louisville, then-No. 1 Michigan State and then-No. 11 Kentucky.
The only other team with two wins this season over top 10 teams is Colorado, which beat then-No. 6 Kansas and on Sunday knocked off then-No. 10 Oregon.
NEW ONES: Illinois and Kansas State made their first appearance this season in the rankings this week.
The 23rd-ranked Illini (13-2), whose biggest win this season was over Missouri, were ranked for eight weeks last season, reaching as high as No. 10.
The Wildcats (11-3), who enter at No. 25 after beating Oklahoma State last week, were in the poll for the last 13 weeks last season, reaching as high as No. 9.
They replace Connecticut and North Carolina.
The Huskies dropped out 17th after losing their first two American Athletic Conference games at Houston and SMU. They were 18th in the preseason poll and got as high as No. 9.
This is the second time this season the Tar Heels have fallen out of the Top 25. They were 12th in the preseason poll but dropped out in the fourth regular-season voting following losses to Belmont and UAB. But they were back in the poll after a one-week absence with their win over then-No. 1 Michigan State. They dropped out this week after opening Atlantic Coast Conference play with a loss at Wake Forest.
BIG MOVES: San Diego State’s win at Kansas had the Aztecs making this week’s biggest jump in the Top 25. The victory moved them from 21st to No. 13.
The biggest drop of the week was Duke’s fall from No. 7 to 16th after the loss at Notre Dame.
RARE AIR: Wichita State’s move from No. 8 to sixth in this week’s poll has the Shockers at their highest ranking since they were No. 2 for one week in December 1981.
Iowa State moved from 13th to ninth, the Cyclones’ first appearance in the top 10 since they were 10th in the final poll of 2000-01. They were in the top 10 for the final five weeks that season, reaching as high as No. 6.
DOUBLE-RANKED: There are six games with two ranked teams this week, including a top 5 and top 10 matchup on the same night.
On Tuesday, No. 3 Ohio State visits No. 5 Michigan State, and No. 7 Baylor is at No. 9 Iowa State.
On Wednesday, poll newcomer No. 23 Illinois is at No. 4 Wisconsin. On Thursday, No. 24 Memphis visits No. 12 Louisville.
No. 25 Kansas State, the other poll newcomer, is at No. 18 Kansas on Saturday. On Sunday, Ohio State faces another ranked opponent when the Buckeyes host No. 20 Iowa.
TOUGH Ls: Iowa split its games this week beating Nebraska and losing to Wisconsin. That was good enough to move the Hawkeyes up two places in the poll to No. 20.
The Hawkeyes’ three losses this season have come to teams with a combined 41-1 record and all were by five points or less.
They lost 88-83 in overtime to Villanova (13-1) in the championship game of the Battle 4 Atlantis; 85-82 at Iowa State (13-0) and 75-71 at Wisconsin (15-0).