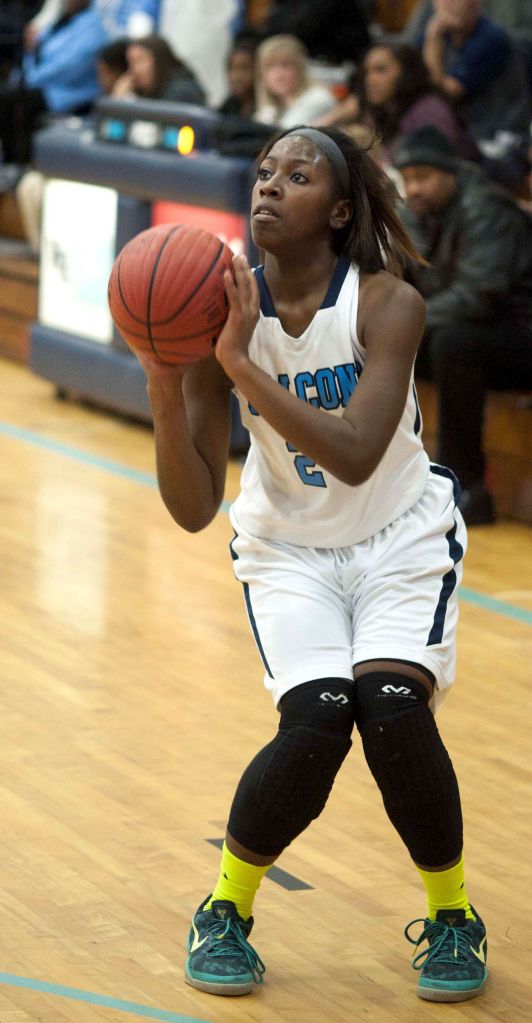 MT. ULLA — In a rebuilding season a win, any win, is important. The victory achieved Friday night by the West Rowan’s girls was especially satisfying.
The Falcons played one of their most complete games of the young season and rolled past visiting South Piedmont Conference foe Concord 66-43.
“That was a great win for us, a fantastic win,” said first-year Falcon Coach Ashley Poole. “We are a young team and I am waiting for us to turn that corner and grow up and it is coming.”
The Falcons (2-4, 4-9) broke out to a quick 15-6 lead then built the margin to as many as 14 before settling for a 30-19 halftime score.
The Lady Spiders (1-5, 2-6) put together a run to open the third period and cut the lead to 30-24 behind guard Jamya Patterson. But the Falcons came of age with a solid response offesnively and defensively that essentially put the game away.
“Coach told us not to let up,” sophomore guard Khaila Hall said of the Spider run. “You let a team like this get some hope and they are going to win it. Our defense really came through.”
Hall herself really came through in the game with a team high 19 points, six rebounds, six steals and several precision passes for assists.
She gave credit to one of teachers who both challenged and inspired her earlier in the day. “She told me this was my year to shine and I was not doing it yet. So this was my wake-up call today.”
Sophomore point guard Taylor Martin was also on target from the outside with 17 while forward Shanise Miller battled inside for 13. Berkley Alessandrini scored seven and had 10 key rebounds.
When Concord closed within 30-24 at the 6:06 of the third quarter, West showed their new maturity with a solid response. Alessandrini nailed a three, Miller hit three of four foul shots and a putback layup, then Hall scored on three straight lay-ups after steals. The run expanded the West lead to 52-30 after three quarters.
West also showed they knew how to close out a game in the final quarter when they ran a spread attack that isolated Hall for a number of driving baskets. The Falcons also continued to press after made shots that served to keep Concord off balance.
“Our intensity was good,” Poole stated,” That is something we have been pushing for all year and they finally figured it out. We are coming of age a little bit more.”
Concord was led by junior center Alisha Vinson and senior guard Destiny Floyd, each with nine. Vinson also grabbed eight rebounds.