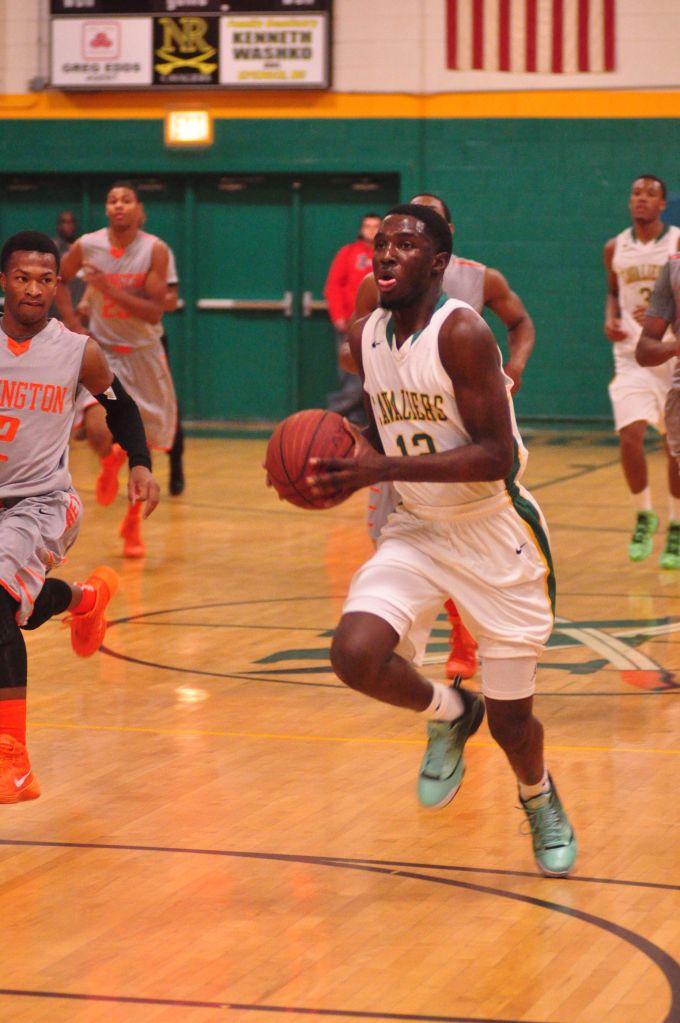 SPENCER — Fresh off the Moir Christmas Classic championship, North Rowan head coach Andrew Mitchell gave his team a challenge heading into the first game of the new year Friday night.
If the Cavaliers were out-rebounded, out-hustled and out-manned against Lexington, the squad would spend the morning on the track running drills in the freezing cold.
North put that idea to rest in a hurry, storming out of the gates en route to a physical, convincing 78-64 victory over the visiting Yellow Jackets in its Central Carolina Conference opener.
“As coaches, we sometimes act a little crazy,” Mitchell explained. “We told them that if we got out-rebounded and pushed around that we would go out on the track at 8 a.m., and have box-out and rebound drills. They tend to believe us because most of the time, we give them what we tell them that we’ll give them. What we really were saying was don’t be out-worked and out-rebounded and they took it to heart. They came out and played really hard.
“It was very important win for us, start off 1-0 with a conference win,” he continued. “We had a good week of practice and the guys stepped up to the challenge. I felt like we were ready from the tip.”
Michael Connor set the pace in the early going, pouring in 13 points — highlighted by an emphatic one-hand slam on the break — in the first quarter as the Cavs built up a 21-14 lead.
“I just wanted to go out there and hustle and give it all I had. I did what I could to help the team,” Connor said. “We just wanted to go out there and play hard with intensity. Defense and rebounding were key for us.”
North’s defense stiffened in the second, limiting Lexington to just eight points to take a 34-22 advantage into the break.
Connor scored four more quick points in a 9-2 spurt to open the third quarter as the lead hit 16 on a Jalen Sanders trey.
The Cavs put the game away with a 12-7 charge to kick off the fourth to cruise to the 78-64 victory.
“I think we worked them pretty good on the boards,” Mitchell said. “The key to our team is when we can deflect, not even steal the ball, it knocks a team out of it’s rhythm. If we can do that, we’re going to get out and run the floor.
“I thought Mike Connor and Jalen did a great job up top getting their hands going and deflecting and stealing some balls,” he continued. “When they’re long and wiry up top like they’re capable of doing, guys like Dalton Nelson, Kenyon Tatum and Mike Bowman can get steals and go make layups. I thought their aggressiveness was key coming out of halftime.”
Connor finished the game with a career-high 27 points to lead the Cavaliers, while Tatum and Sanders tallied 15 and 14 points, respectively.
“We wanted to come out and improve and play harder. We didn’t want to win the Moir and then come into 2014 and not play hard,” Connor added. “We had to forget about it, move on and continue to play hard.”
Still on the high of winning the Moir championship, Mitchell knows that his team has their sights set on more.
“We have four other goals for championships: conference, sectional, regional and state. If you lay around and gloat over that Moir championship, you don’t get the opportunity to play for the other four.”
LEXINGTON (64) — Page 17, Cross 12, Benson 10, Reid 8, Peterson 7, Holt 4, Baldwin 3, Byrd 3, Welburn, Boger.
NORTH ROWAN (78) — Connor 27, Tatum 15, Sanders 14, Archie 8, Bowman 7, Nelson 3, Bates 2, Handy 2, Walker, Billingsley, Hillie, Scott, Mungin.
N. Rowan 21 13 19 25 — 78
Lexington 14 8 11 31 — 64