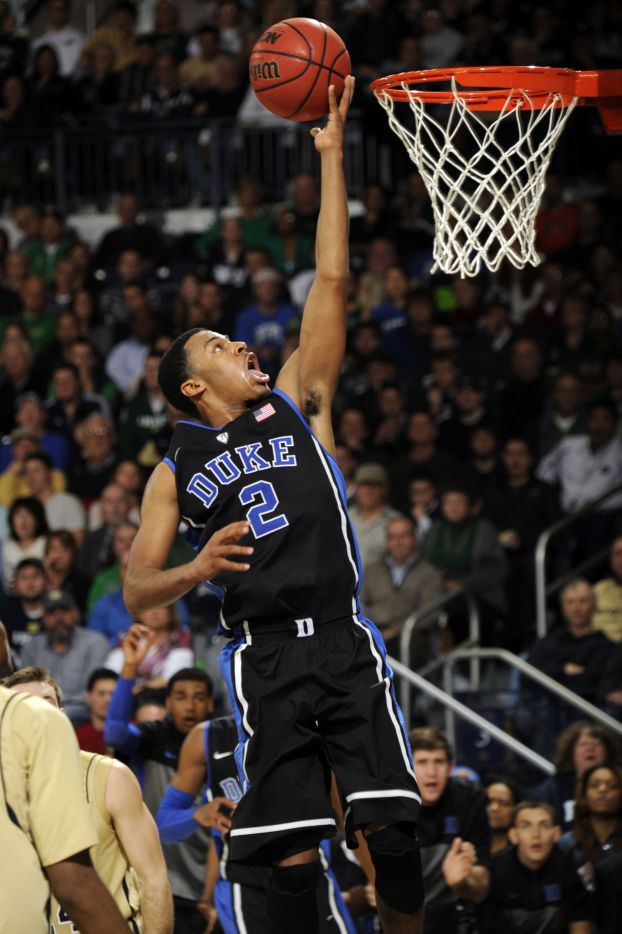 SOUTH BEND, Ind. — Notre Dame sent quite the message in its Atlantic Coast Conference debut.
Eric Atkins scored 19 points, Pat Connaughton had 16 and the Fighting Irish upset No. 7 Duke 79-77 on Saturday.
The victory comes in the wake of leading scorer Jerian Grant’s dismissal from school two weeks ago for an academic violation and provides a much-needed confidence boost as the Irish begin play in their new league.
“It’s really important for our group given the two weeks we’ve had to feel like, ‘Hey, we may still have a shot at this thing.’ Because nobody else thought we had a shot,” Notre Dame coach Mike Brey said.
Atkins scored seven points during a decisive 20-4 run as Notre Dame rallied from a 10-point deficit and held on to win two weeks after squandering an eight-point lead in the final 50 seconds against No. 3 Ohio State at Madison Square Garden.
“It definitely gives us a lot of life. Everybody’s confidence is up now, winning such a big game,” Atkins said.
The Irish (10-4, 1-0) improved to 13-6 against top-10 teams at home under Brey. It was the first loss in an ACC opener for the Blue Devils (11-3, 0-1) in seven seasons.
Rodney Hood, who led the Blue Devils with 27 points, said Duke played like an immature team, allowing the Irish to hold the ball for long periods and then score as the shot clock ticked down.
“When we needed a stop, we didn’t get a stop,” Hood said. “We had some balls go in and out, but I can name at least 10 plays where it was a breaking point and we didn’t pull it off.”
Duke used a 9-0 run to open a 49-40 lead early in the second half and stretched the lead to 60-50 when Andre Dawkins made a 3 from the top of the key with about 11 minutes left.
But when Notre Dame went to a small lineup to try to guard the Blue Devils better from behind the arc, Demetrius Jackson hit a 3 to spark the 20-4 run.
“I thought that was the biggest shot of the game,” Duke coach Mike Krzyzewski said. “If we get a stop, we could have gone up by 12. That was a huge shot.”
Atkins tied the game on a layup, and then followed with another basket inside on a pass from Connaughton. Steve Vasturia, who wasn’t getting much playing time before Grant was dismissed, hit a 3-pointer to give the Irish a 68-64 lead after Duke freshman Jabari Parker, who struggled all game, badly missed a 3.
“That was a huge shot to really make us believe,” Brey said.
The Blue Devils closed within one point twice in the final 2 minutes, but the Irish didn’t wilt under the pressure.
Atkins made a layup after Duke cut it to 72-71, and then Garrick Sherman hit a free throw with 16 seconds left after missing the first. Duke still had a chance to tie the game, but Hood dribbled too deep and had a pass stolen by Jackson. Each team finished with six turnovers.
Krzyzewski blamed the loss on Duke’s defense.
“We just stopped playing the defense that we were playing,” he said.
Sherman had 14 points as the Irish outscored Duke 44-16 in the paint.
Quinn Cook had 22 points for Duke, which was 12 of 28 from beyond the arc, one shy of its season high.
Parker, who grew up 90 miles away in Chicago, failed to score in double figures for the first time this season. He missed his first four shots, including a 12-foot baseline air ball, and had a jumper blocked by Austin Burgett. Cook looked frustrated at the end of the first half when it appeared Parker ran the wrong play.
Parker had seven points on 2-for-10 shooting and wasn’t in the game at the end.
“He just wasn’t having a good game,” Krzyzewski said.
Brey said good team defense played a role in Parker’s off day.
“I think there was a great team awareness of him. I wish we could have used some of that on Hood,” he said.
Brey improved to 1-1 against his former boss.
“It’s a historic day for us, our first ACC game,” Brey said.
“To beat a program like Duke’s will always be a great memory for us starting off in Atlantic Coast Conference play.”