Anderson pulls away from Catawba 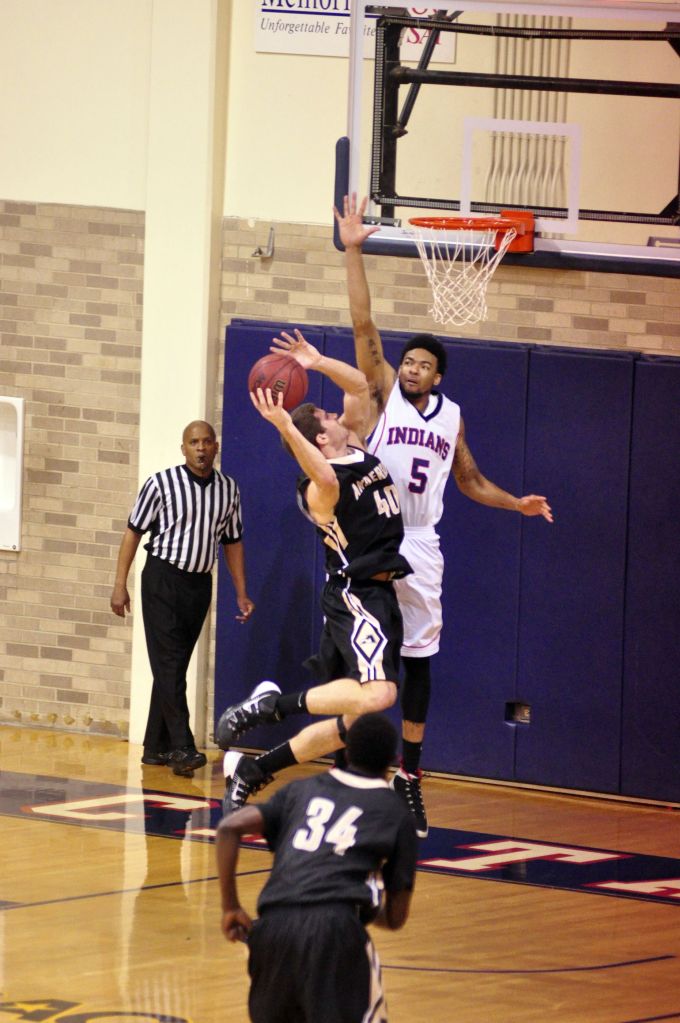 SALISBURY — Anderson has had Catawba’s number in recent memory.
Facing off for the 10th time in three seasons Saturday afternoon in Goodman Gym, nothing changed.
The Trojans pulled away from the Indians in the second half for the comfortable 78-55 victory to win their seventh-straight game in the series in convincing fashion.
“It was a tale of two halves,” Catawba head coach Jim Baker explained. “In the first half, we couldn’t have played much better, even though we didn’t shoot it well. In the second half, we came out flat and didn’t shoot it well. It seemed like the whole second half, we just looked out of sync.
“We came out standing around a little bit,” he continued. “We played a good first half and I’m not sure if we thought it would be easy in the second.
“We’re still a very young team and we’re a bit emotional like that. If things are going good, we’re fine, if not, we have to learn to buckle up and push through it.”
Anderson opened on a 8-2 run to take control early in a defensive struggle before the Indians responded.
Catawba scored 11 of the next 13 points to push ahead 13-10 on a Elon Edwards long trey from the top of the key.
The Trojans retook the lead at 17-15 moments later on a Chris Ross hook in the paint and never looked back.
Catawba kept the game close down the stretch and headed into the locker room down by just three at 27-24.
But a quick 7-3 spurt in the opening minutes of the second half jump-started an offensive explosion for Anderson, who poured in 51 points in the frame, while stunning the Indians.
“We’re right there,” Baker added. “We started bad in four or five games and got behind. In this game, we were right in it. Then we started the second half without playing.
“We just have to keep plugging along. We have some talented kids, but we just don’t look in sync.”
The Indians cut the deficit down to seven on another Edwards’ three-pointer midway through the half to show signs of life, but Anderson answered each run.
The Trojans rode a 31-15 run over the final 10:36 to extend the lead out to 20 before cruising to the South Atlatic Conference victory.
“We cut it down a couple times. But then we’d come down and take a bad shot or not get what we wanted,” Baker said. “We have some ability but I just can’t figure it out – it’s puzzling to me.”
With the loss, Catabwa dropped their seventh-straight game to Anderson.
The Indians have not won in the series since the 2011 South Atlantic Conference Tournament opening-round match-up when Dominick Reid drilled a last-second shot to lift the Indians to a thrilling 85-83 upset triumph.
Tyrece Little paced Catawba with 15 points and five rebounds, while leading-scorer Kijuan Arrington was held to just 13 points and five boards, well below his season average of 18.7 points per game.
Edwards finished with 11 points and five assists with Vismantas Marijosius adding six points and three boards.
The Indians only shot 31 percent from the floor for the game, including a 28 percent mark (9-of-32) in the second half where they were out-scored 51-31. Catawba shot 15 percent (3-for-20) from behind the three-point line.
The Trojans hit on 51 percent of their shots in the game, including nearly 60 percent (16-of-27)in the second half.
Anderson sank 10-of-14 three-pointers, good for a 71 percent mark from behind the arc.
CJ Gleaton led all scorers with 16 points and four steals, while Chandler Hash added 15 points on three treys.
Myson Jones pitched in with 12 points and five rebounds with Chris Ross adding 10 points and five boards in the post for the Trojans.
Catawba fell to 2-8 on the year with the loss, dropping to 2-4 in conference play, while Anderson improved to 9-3 and 4-2.
“We just have to get our chemistry smoother,” Baker said. “We don’t flow very well. We just have to get more in sync with each other and a little more flow to it.”
The Indians return to the court Wednesday night in league action against Newberry (8-2, 4-2.)