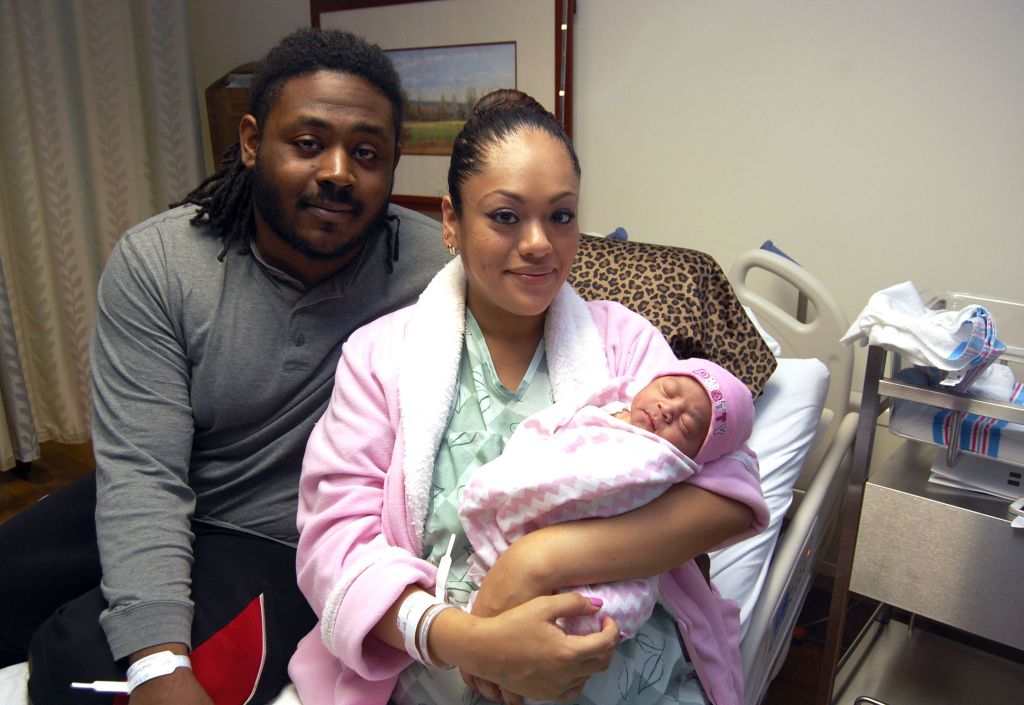 SALISBURY — Jenalyse Sophia Glenn was supposed to be a Christmas baby.
Instead, the 7 pound, 11 ounce infant took her own sweet time and arrived a week late, just before 5 p.m. Wednesday, making her the first baby born in Rowan County in 2014.
Little Jenalyse, who slept through her photo shoot Thursday at Novant Health Rowan Medical Center, almost lost the race for New Year Baby. Several moms-to-be labored simultaneously throughout the day Wednesday, and at least two other babies were born shortly after the world welcomed Jenalyse.
While new mom Anahi Carmona told the Post she was surprised to learn that Jenalyse was the first baby of 2014, father Fredrick Glenn said he had a feeling his tiny daughter would capture the big honor.
“I knew it,” Glenn said. “I believed she was going to steal all the attention and the spotlight.”
Jenalyse is the first baby for Carmona and Glenn, who live in Kannapolis and started dating in 2006 while students at A.L. Brown High School. The high school sweethearts were thrilled to learn Thursday that although Jenalyse did not arrive on Christmas, she was showered with gifts just the same.
Smart Start Rowan presents a basket of goodies to the first baby of the year, and the 2014 basket containing at least $250 in items donated from local stores was the biggest and best yet, said Clara Marts, parent outreach coordinator. Marts needed a cart just to get the extra-large wicker container filled with supplies and toys into Carmona’s hospital room.
Martha Baker, interim executive director for Smart Start and board chairwoman, and executive assistant Tracy Webb-Goodman presented the basket and congratulated the new parents. Marts invited the family to attend the Circle of Parents support groups she leads, one in English and another in Spanish.
Marts said grandparents like Carmona’s mother, Evangelina Hernandez, are welcome to attend as well. Hernandez will care for Jenalyse when Glenn is at work at Lowe’s in Kannapolis and Carmona is in school the University of North Carolina at Charlotte, where she has one year left to complete a social work degree.
Glenn answered his phone at work around 10 a.m. Wednesday to hear Carmona calmly report that her water had broken. The soon-to-be dad tried to remain collected as well but admits he nearly ran out of Lowe’s.
“I had a lot of pep in my step,” he said.
The couple went straight to the hospital, and Jenalyse was born about six hours later.
Carmona said she chose to deliver at Novant Rowan because she enjoyed the prenatal and breastfeeding classes she took at the hospital. Carmona said Dr. Lynn Pitson of Salisbury OBGYN Associates cared for her during the pregnancy, and Dr. James Murphy of Carolina Women’s Health Associates delivered Jenalyse.
Salisbury’s newest celebrity remained blissfully unaware of her fame Thursday. But someday, Glenn said, his daughter will have quite a story to tell.
Contact reporter Emily Ford at 704-797-4264.