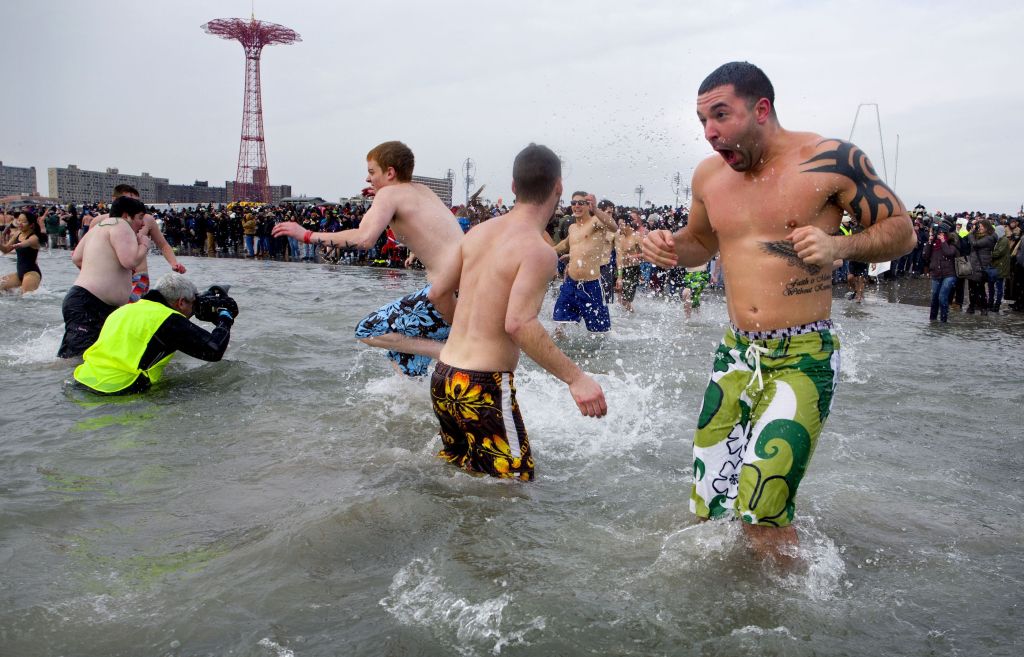 NEW YORK (AP) — Hundreds of brave bathers rang in 2014 with a plunge into the icy ocean off Coney Island.
Members of the Coney Island Polar Bear and Ice Breakers clubs and other hardy swimmers stripped down to their trunks or dressed in costumes on Wednesday for the annual New Year’s Day splash.
Some people hit the surf dressed only in bikinis or briefs. A group of guys wore bow ties and top hats and had a tea party, and others waved giant American flags. Temperatures outside were in the low 30s. People screamed at the shock of the cold water.
Polar Bear club president Dennis Thomas, whose club has hosted the annual dip since 1903, said it was a perfect day for a swim.
“It was a glorious beach day,” he said. “New York City beaches are great even in the winter. We love being out in it.”
Thomas has been a member for more than 30 years and has done countless swims. Others, though, were jumping in for the first time.
Michael Haltman and his 17-year-old son, Cory Haltman, took the plunge to raise awareness for the bone marrow donation registry. His 23-year-old daughter, Samantha Haltman, is donating bone marrow to a patient struggling with blood cancer, and they wanted to show support.
The water was a shock — Haltman said he felt it was difficult to breathe.
“I wore a winter coat until it was time to go, but others were out there for an hour and a half only in bikinis,” Haltman said. “Parts of my body are still re-emerging. The sun wasn’t out. It was freezing. Water temperature wasn’t much warmer.”
The Polar Bear club swim raises money for Camp Sunshine, a camp for children with life-threatening illnesses. The club hosts swims weekly during the winter months.
Just east of Coney Island at Brighton Beach, the Ice Breakers plunged into the Atlantic. The group has 14 members over the age of 70, including 90-year-old Michael Friedman. The group is a loose membership of eager winter swimmers who raise awareness for environmental issues.