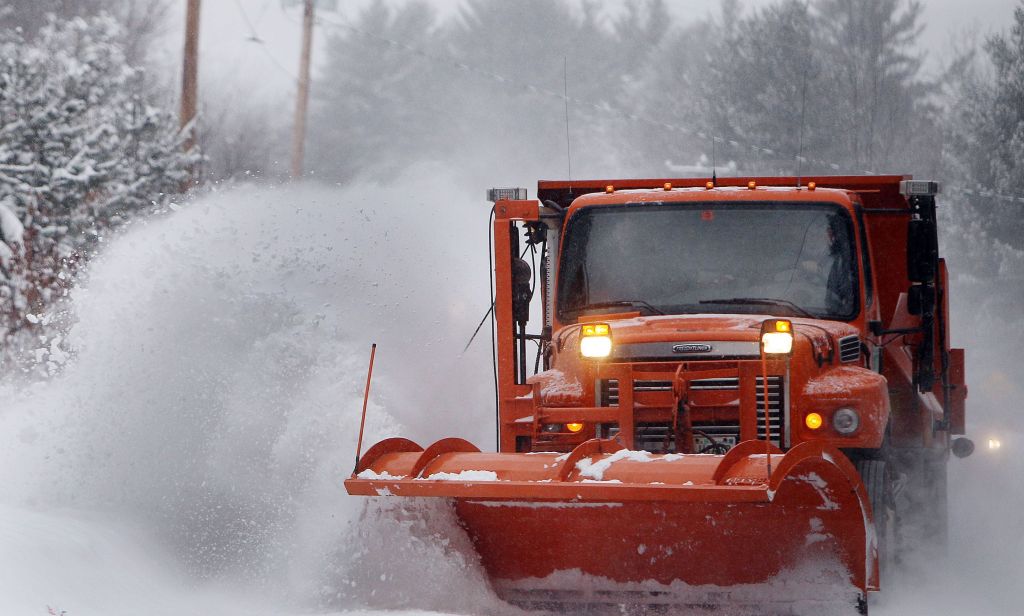 BOSTON (AP) — A strong winter storm slammed the Northeast with stiff winds and punishing cold on Thursday, dumping nearly 2 feet of snow in parts of the region and threatening more.
The National Weather Service said 21 inches of snow had fallen in Boxford, just north of Boston, by Thursday night, while other parts of the state had 17 or 18 inches. It said parts of upstate New York had 18 inches while New York City was expected to get about 8.
The brutal weather extended Christmas break for some students while posing the first test for New York’s new mayor and perhaps the last challenge for Boston’s outgoing one.
Some schools in New England and New York closed well ahead of the Thursday snowfall. Cities have mobilized plows and salt spreaders. Some major highways have been ordered shut down overnight. Efforts are underway to get homeless people into the warmth and safety of shelters.
U.S. airlines have canceled more than 2,300 flights nationwide.
The heavy weather began rolling in just a day after New York Mayor Bill de Blasio was sworn in to lead the nation’s largest city and a few days before Boston Mayor Thomas Menino ends 20 years in office.
Menino announced a parking ban and said schools would be closed Friday in Boston, where up to 14 inches of snow was expected.
“What a New Year’s gift, to receive one last snowstorm as mayor,” said Menino, whose successor takes office on Monday.
De Blasio, who as public advocate in 2010 criticized his predecessor Mayor Michael Bloomberg for his handling of a post-Christmas storm, said hundreds of plows and salt spreaders would be on the streets as soon as the snow started falling Thursday night.
“We have to get it right, no question about it,” de Blasio said. “We are focused like a laser on protecting this city and getting everyone ready. We have all hands on deck.”
Snow began falling overnight Wednesday in parts of New England and New York state, but the brunt of the storm wasn’t expected until late Thursday. Forecasters said temperatures would plummet, with some areas seeing highs just above zero and wind chill readings of minus-10 and colder.
The National Weather Service issued a blizzard warning for Cape Cod, coastal areas north and south of Boston and part of Maine as well as New York’s Long Island.
“We’re going to see a lot of snow and a lot of wind,” forecaster Jason Tuell said. “We’re concerned about whiteout conditions possibly tonight with the blowing and drifting snow.”
Massachusetts Gov. Deval Patrick said state offices that closed early Thursday would remain closed on Friday. He said National Guard members and state police were on standby for any high tide flooding overnight or Friday in vulnerable coastal areas, but no mandatory evacuations have been ordered.
New York Gov. Andrew Cuomo ordered three major highways in his state, stretching from Long Island to Albany, to close overnight. He said the highways should reopen at 5 a.m. today.
As of late Thursday in Connecticut, about 3 inches of snow had fallen in Hartford County, and 3 inches were reported in East Hartford and Simsbury. Parts of New Hampshire had 5.5 inches, and parts of Rhode Island had more than 2.
Outreach teams looked to get homeless people off the streets of New York City and Boston.
In Boston, staff members at the Pine Street Inn shelter were keeping it open 24 hours and said they would turn no one away, even if it meant setting up extra cots in lobbies and other common areas.
As the storm approached, a worker at a suburban Philadelphia salt storage facility was killed when a 100-foot-tall pile of road salt fell and crushed him. Falls Township police said the man was trapped while operating a backhoe. There was no word on what may have caused the accident.
Amtrak planned to run trains on all of its Northeast lines on Friday but operate on a modified schedule, spokeswoman Christina Leeds said.
In New York, Consolidated Edison utility spokesman Sidney Alvarez said the utility was expecting the snow to remain powdery rather than wet and heavy, “but with any type of snow, you’re looking at extra weight on branches that can snap and bring power lines down.”
Douglass Bibule shopped for rock salt and other supplies at a home improvement store in Watertown.
“Well, there will be some shoveling that I will have to do and some sanding,” he said. “I’ve got to go home and do some stretching exercises to make sure I don’t hurt myself while doing that, and do a little shopping to make sure that we have all the supplies that we need. We need food because we have three older children at home.”
In Maine, the cold didn’t deter Andrew Kosak from swinging by Gelato Fiasco in Brunswick to take advantage of a cold-weather promotion: The price of a gelato drops 1 percent for every degree below freezing.
“It’s never too cold for gelato,” Kosak quipped after receiving a 36 percent discount that reflected the minus-4 temperature during an outing with his wife and two daughters.

SACRAMENTO, Calif. (AP) — The new year brought relief for Americans who previously had no health insurance or were stuck in poor plans, but it also led to confusion after the troubled rollout of the federal health care reforms sent a crush of late applications to overloaded government agencies.
That created stacks of yet-to-be-processed paperwork and thousands — if not millions — of people unsure about whether they have insurance.
Mike Estes of Beaverton, Ore., finally received his insurance card on Dec. 27 after applying in early November. Still, the family was thrilled to have insurance through the Oregon Health Plan, Oregon’s version of Medicaid, because their previous $380-a-month premium “literally crushed our family’s finances,” Estes said.
Obama administration officials estimate that 2.1 million consumers have enrolled so far through the federal and state-run health insurance exchanges that are a central feature of the federal law. But even before coverage began, health insurance companies complained they were receiving thousands of faulty applications from the government, and some people who thought they had enrolled for coverage have not received confirmation.
Tens of thousands of potential Medicaid recipients in the 36 states relying on the federal exchange also are in limbo after the federal website that was supposed to send their applications to the states failed to do so.