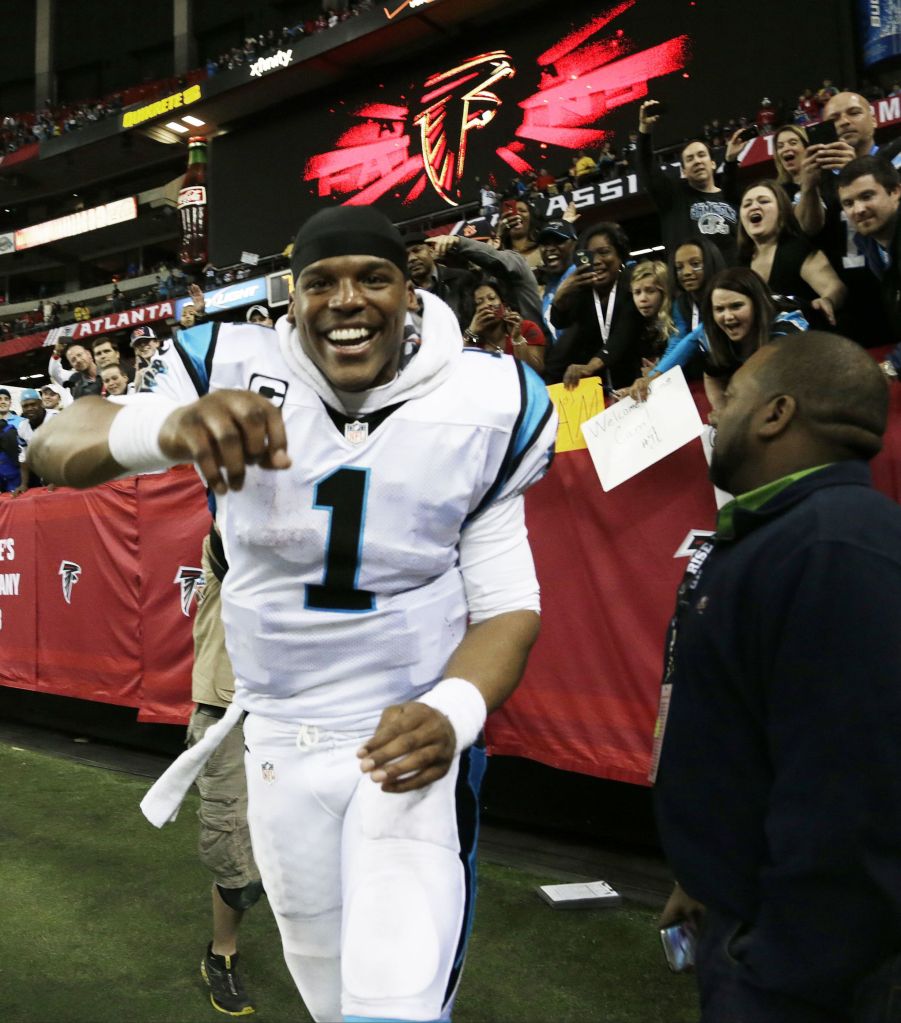 CHARLOTTE — Cam Newton knows he’ll need to bring his passes down if he wants to thrive in the NFL playoffs.
Whether it’s leading Auburn to a national championship, throwing for 422 yards in his rookie debut or leading the Carolina Panthers on a last-minute drive to beat Tom Brady and the Patriots on Monday Night Football, Newton has been at his best when the games are most important.
Coach Ron Rivera said big games tend to bring out the best in Newton.
The Panthers hope that Newton continues that trend on Jan. 12 when he plays in his first playoff game.
Newton believes he and his teammates will do just that — no matter who they play.
“I feel when we are playing at our best there is really no team that can stop us.” Newton said.
But the Panthers offense hasn’t been at his best in the last month.
Newton has reverted at times to his tendency to throw off his back foot, thus allowing the ball to sail over the heads of intended receivers.
Rivera said he’s not concerned though.
“We have been through this before with him before and he just makes a couple of adjustments and he gets it back down,” Rivera said. “Everybody goes through ups and downs. So right now he might be in a down.”
The Panthers have spent the bye week working to sharpen their offense, particularly the passing game. Over the past four games Newton has thrown for only 763 yards and five touchdowns while averaging 7.1 yards per pass attempt. It doesn’t help that wide receiver Steve Smith is nursing a sprained ligament in his knee and missed Week 17.
Said Newton: “I need to be better, not missing throws that I’m capable of making.”
Newton’s overall body of work has been pretty solid.
He threw for 3,379 yards this season with a career-high 24 touchdown passes and 13 interceptions. He ran for 585 yards and six scores and was selected to the Pro Bowl.
More importantly to Newton, he got the Panthers to the playoffs with a 12-4 record.
Newton said the two-week layoff between playoff games doesn’t compare to the lead up to the national championship game at Auburn.
“Two different situations,” Newton said. “It’s nothing like college at all. I have yet to experience a playoff game, but I know the atmosphere will be hectic to say the least. There is a lot more to play for if you ask me.”
Newton said his approach to the playoffs will be the same as the regular season.
“You don’t want to be overthinking things,” he said.
He also said getting a rest this week has been “therapeutic” for him and the team.
In recent weeks, he’s battled through minor injuries to his ankle, toe, arm, head and mouth but hasn’t missed a snap.
Part of that could be Newton is running a bit more than he did early in the season, which he attributed to “taking what the defense is giving me.”
Newton ran 12 times in Carolina’s win over Atlanta on Sunday and said after the game he doesn’t want to make a living off carrying the ball that many times on a regular basis.
But the bottom line is Carolina is winning games.
The Panthers have won 11 of their last 12 games with Newton leading four game-winning drives during that span, using both his legs and his arm. And Newton is willing to do whatever it takes to continue that trend on the big stage.
“We have found a way to win,” Newton said. “Prior to this year, we haven’t had the success we needed (in close games), but we learned from those situations and it’s showing in our play.”