New tipi is a place for healing 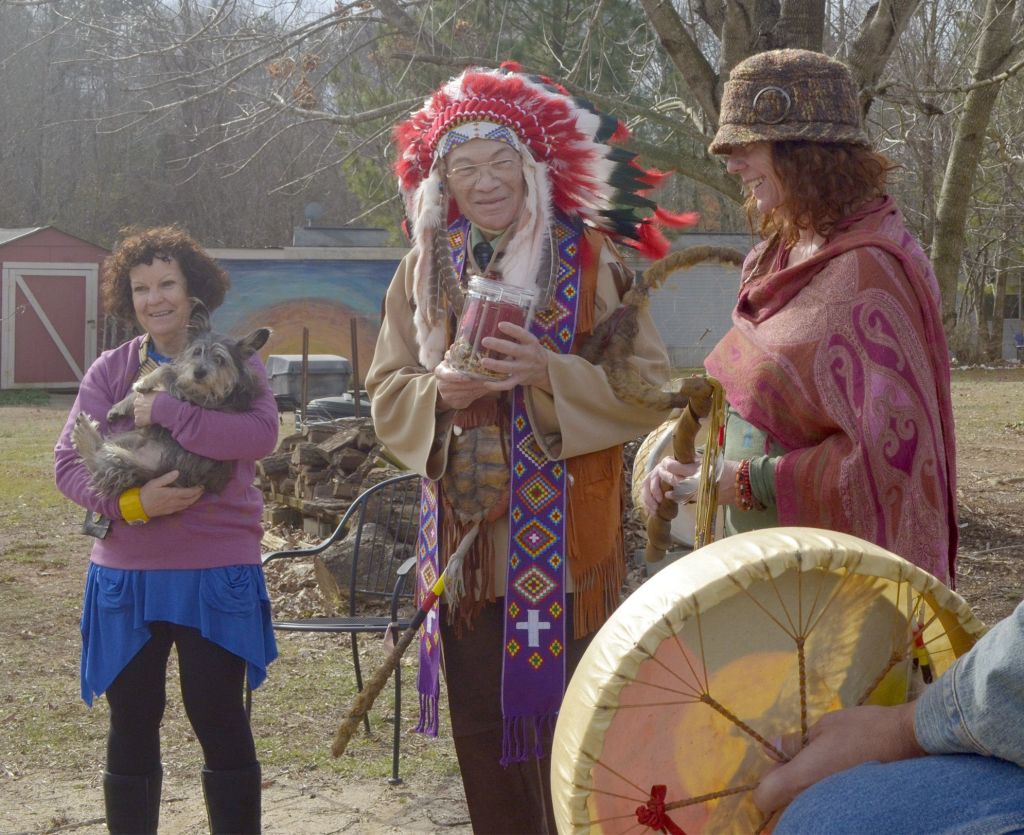 GOLD HILL — In a clearing on the lawn of one of the buildings at the Sacred Grove Retreat Center stands a new, bright-white tent.

It’s a Native American tipi — pronounced “teepee,” but this is the spelling many prefer.

Unlike the ones you might have seen on TV or in the movies, this is a canvas-covered structure. Its frame is built of thick, long poles of giant cane, informally called “bamboo.”

Modeled after the plains homes of the Lakota, and other Native American peoples, this tipi is just as portable, though it isn’t meant for travel.

The Rev. Fleming Otey, who holds the title Chief Holy Eagle, assisted the Sacred Grove Retreat Center with the construction of what will be a home for ceremonials, drum circles, retreats and social gatherings.

Ellen Whiteside, owner of the retreat center for the past seven years, said part of the funds for the tipi came from a donation she’d received.

“I wanted to put it toward something that was tangible,” Whiteside said.

At Sacred Grove, there are already several homes and ceremonial structures, including a yurt – an Asian portable home that has cultural and religious significance in different nations.

Otey, meanwhile, was looking for a way to honor his wife and her sister, both of whom are battling cancer, Whiteside said.

The tipi was the result.

Willard Moose, of Mount Pleasant, constructed the tipi. A longtime Boy Scout volunteer, Moose said he learned how to build the American Indian tents decades ago.

This canvas tipi has flaps that open to allow the smoke from the fire pit within to escape, which can also close to keep rain out.

“It’s gratifying to be able to contribute to the organization here, to be a part of it,” Moose said.

Conceived this fall, and built in only a matter of weeks, the tent’s dedication was set for New Year’s Day for several reasons.

In part, the ceremony was a celebration of life and the beginning of a new year.

It also served as a memorial for Otey’s, brother-in-law, Pete McCoy.

On a blanket spread outside of the new tipi were a number of objects, including a piece of bamboo from Otey’s wife’s family land in Japan.

There was also a photo of McCoy, a jar containing some of his ashes, a 500-year-old ceremonial staff and more.

Standing in a circle, with a drum slowly beating time, the 13 attendees took turns holding a talking stick, telling the assembled group the hopes, joys and concerns they had as the new year began.

They then walked in a circle around the tipi, singing a Cherokee song, “We n’ de ya ho” – which translates as “I am of the Great Spirit.”

Inside the tipi, a fire was burning in the fire pit, made of local quartz and other rocks.

The fire pit is in the shape of a mandala, a ceremonial wheel, with points representing the four compass directions.

Otey said the tipi is meant to help give retreat-goers a place that is “a multicultural, multi-faith, multi-denomination.”

Robbie Warren, resident at Sacred Grove Retreat Center, said a wide variety of events are hosted there, including Sunday spiritual services and other ceremonies.

Her partner, Trai Hill, said he felt the tipi represented “community, an expression of coming together and the joy that comes from that.”

“A lot of what we’ll do here is drum circles, and a lot of gatherings and celebrations,” Hill said.

Robert Roffman, of Huntersville, said the gathering on New Year’s Day was appropriate because he will soon head out to Florida for work.

With its Native American spiritual influence and heritage, the tipi dedication ceremony was “very nourishing and cleansing,” Roffman said.

It’s an addition that will help many people, organizers said.

“Life comes at you pretty fast sometimes,” Otey said. “Here, you see a lot of healing, too.”