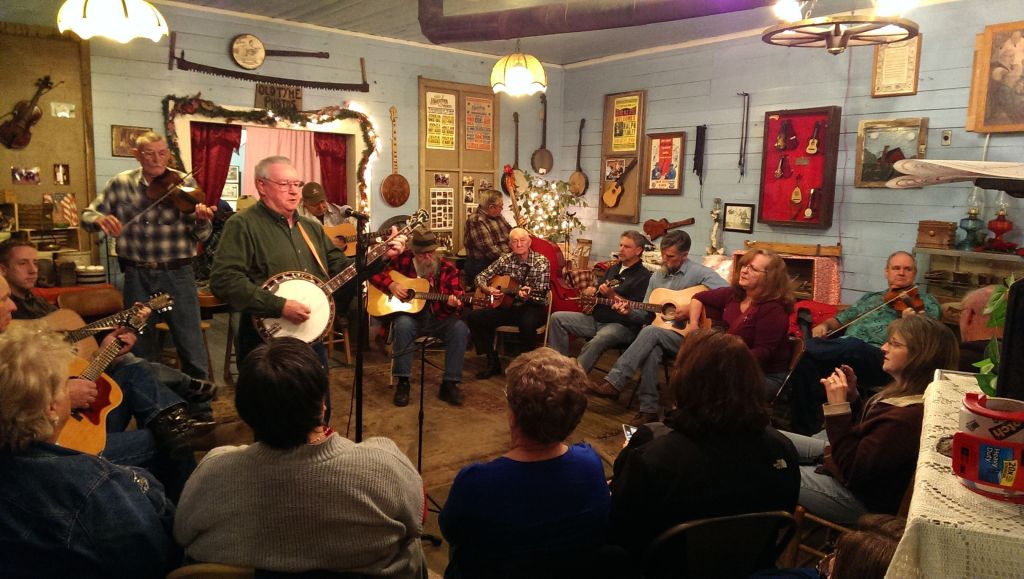 GOLD HILL — The bluegrass jams held at the E.H. Montgomery General Store every Friday evening have become so popular that owner Vivian Hopkins has started branching out.
“Our store on Friday nights is packed,” she said. “So many musicians want to come and take part in what we’re doing here.”
Hopkins said that’s why she’s hosting “Breakin’ Up Christmas” from 4 to 9 p.m. Saturday at the store.
The event invites people of all ages to come together to enjoy fellowship and share music while winding down the holiday season.
“We’ve done something similar in the past, but I’m making it a little bit bigger this year because it’s been so well received,” she said. “I thought on Saturday we’d start earlier in the day, so we’d have more time for musicians to play and people to come and get familiar with their music.”
The store will seat about 40 people, but Hopkins said she expects spectators to float in and out.
“Hopefully, if the weather cooperates it won’t be super cold outside and we can have some pickin’ and jammin’ outside during the afternoon hours,” she said.
Hopkins said both amateur and professionals musicians are expected to show up for the event, which she said is a tradition in the Blue Ridge Mountains.
“It’s just like our jams,” she said. “We never know who or how many people will show up until they arrive.”
Hopkins said more than half century ago, people in the mountains of Southwest Virginia and Northwest North Carolina celebrated “Breakin’ Up Christmas” with house parties that included old-time string music, song and dance during the two week period that follows Christmas.
The 12-day celebration ran through Old Christmas, which is Jan. 6.
“Breakin’ Up Christmas” is both a name for the celebration and a song sung during that period,” Hopkins said.
Hopkins said the tradition actually began with celebrations rooted in Ireland and Scotland.
“In these original celebrations, a group of men would make surprise visits to the various homes, performing plays and festive music for small donations of money and gifts,” she said. “The tradition continues today, but just for the fun and love of sharing the music.”
Much like the Friday night jam sessions introduce people to bluegrass, Hopkins said Saturday’s event will give people a chance to explore old-time music, a type of folk music played on acoustic instruments.
“Growing up in the mountains, my dad played at some of these events, but as a kid I didn’t understand the significance of it; it just felt like a big party, she said. “It’s been fun to bring the significance of these types of music to the forefront.”
Hopkins said more and more people have begun flocking to the Friday bluegrass nights.
“People come from Charlotte and Greensboro; bluegrass has quite a big following,” she said. “We have no electric instruments — it’s all acoustics — and people just love it.”
Those who have never gotten hooked on bluegrass or old-time music need not stay away Saturday, Hopkins said.
“I think everybody would enjoy it,” she said. “It’s something you have to hear live to really get the full experience.
“It exposes people to a different music culture.”