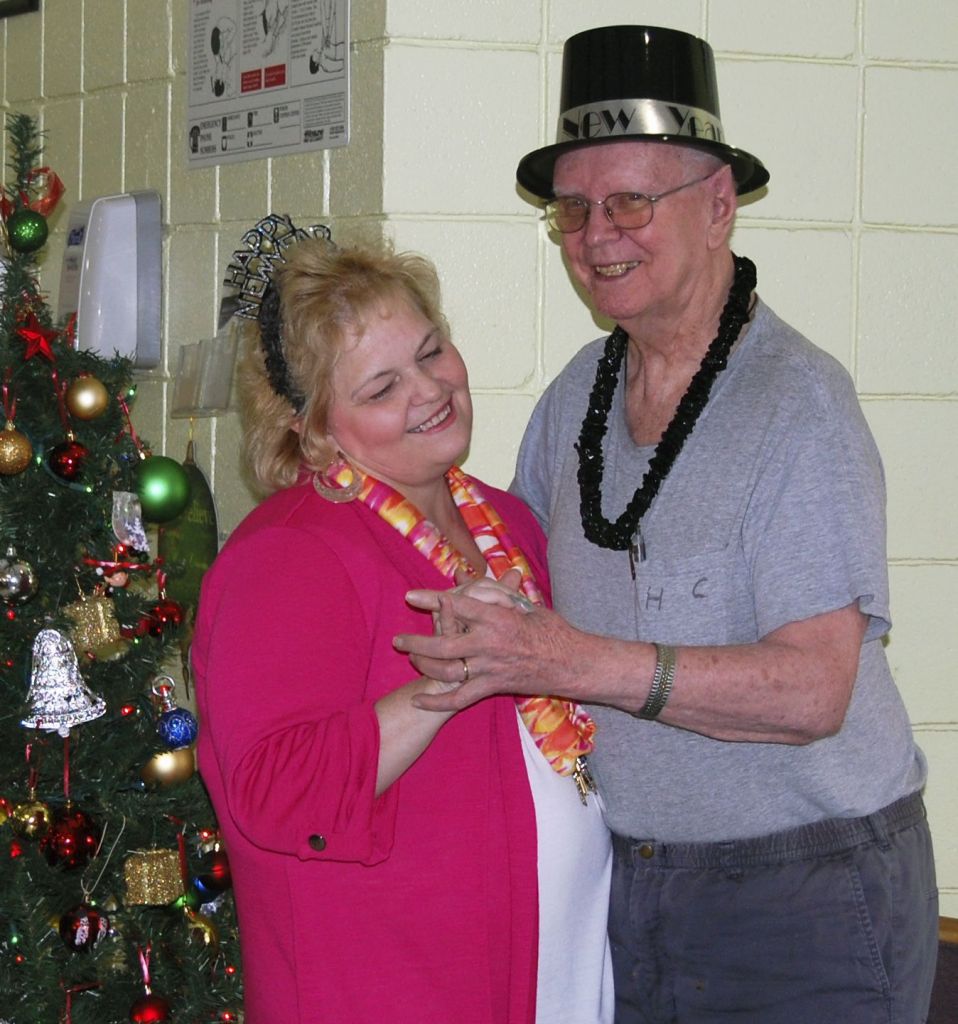 KANNAPOLIS — Tuesday was no ordinary afternoon at Big Elm Retirement Center in Kannapolis. Surrounded by festive decorations, residents donned party hats, wielded noisemakers, sipped on sparkling cider and snacked on cake and cheese and crackers.
They danced, cheered and made use of their noisemakers after a countdown to the “new year.”
New Year’s wasn’t the only occasion Big Elm residents were celebrating, however. Jan. 1 is also fellow resident Glenn Jenkins’ 99th birthday.
Family and fellow residents surrounded Jenkins as he celebrated his big day.
“This is about the best one (birthday) I ever had,” Jenkins said.
For a 99-year-old, Jenkins is incredibly coherent and likes to tell stories.
“Outside of I can’t hear and can’t walk, I feel like I’m thirty years old.”
Jenkins has lived at the retirement center for about three years, and Barbara Hime, activity director for the facility said, “He’ll outlive us all.”
Jenkins says his secret to making it to 99 is that he did exactly what his mother told him to do. “She never said anything wrong.”
Jenkins doesn’t know how long he wants to live. “I just want to be ready when He calls me — if it’s short or if it’s long.”
Jenkins was born Jan. 1, 1915 and primarily grew up in Rowan and Cabarrus Counties.
His father was a farmer, and Jenkins was extremely close with his mother, who died 60 years ago.
“She was the most wonderful thing I ever had,” he said.
Jenkins’ family moved a lot when he was a child. He lived in 12 houses by the time he turned 12 and even attended three different schools over the span of three months.
He went to school through fifth-grade and was really good at math.
Jenkins worked in textile mills for 47 years. He receives a $44 pension check each month.
“I’ve made enough towels and washclothes to walk around the world on,” he said.
Jenkins married Esther Foster in 1927, then married again after her death.
He was between 85 and 90 years old when he married Lucille and was happily married to for 10 years before her death.
“My last marriage was love at first sight,” Jenkins said.
“That was just a blessing,” said Kathy Jenkins, his daughter-in-law.
Jenkins said the most important things to him are his children and his two wives.
He is a member of North Kannapolis Methodist Church and has been an assistant Scoutmaster for the Boy Scouts of America for 65 years. He still goes to Scout meetings.
Jenkins said it cost $1 a year when he signed up, but now it’s $19 a year.
Over the past 99 years, Jenkins has seen many changes in culture and society.
“We just had nothing back then,” he said.
Jenkins didn’t see his first drug store until he was 12 years old. He didn’t buy his first car, a Dodge pickup truck, until he was in his mid-thirties, and he didn’t own a television until he was in his early forties.
People do whatever they want to now, Jenkins said, “whether it’s right or wrong.”
He also said that he’s observed a change in attitude toward racial equality over his lifetime.
“That’s one thing that’s changed a whole lot.”
“I was never mean,” Jenkins said, but he wishes he “could have been better throughout life.”
Family and friends, however, painted a picture of a kind, generous and upright man.
Out of Jenkins and his four brothers, three of them have never cursed.
Jenkins’ family begged him to tell the story about the oranges.
“The most valuable thing I ever gave away cost three-and-a-third cents,” he said.
Jenkins said he bought three oranges for 10 cents. He gave one to his brother and ate one. He planned to eat the third one as well, but his brother, who was sick, also wanted it. Jenkins struggled with the decision, and couldn’t bring himself to give it to his brother.
“I believe it would have killed me to give it to him,” Jenkins said.
So, he told his mother where he had put the orange and asked her to give it to his brother once he left for school.
These days, Jenkins has grape vines that produce bushels of grapes each year. Instead of keeping them all or selling them, he gives them away.
Big Elm Nursing and Retirement Centers specialize in rehabilitation, skilled nursing and assisted living.
The residents of the retirement center are active and social. Unlike Jenkins, however, most of them don’t have family, so Big Elm staff throws a birthday party sponsored by local businesses for residents on the first Friday of each month.