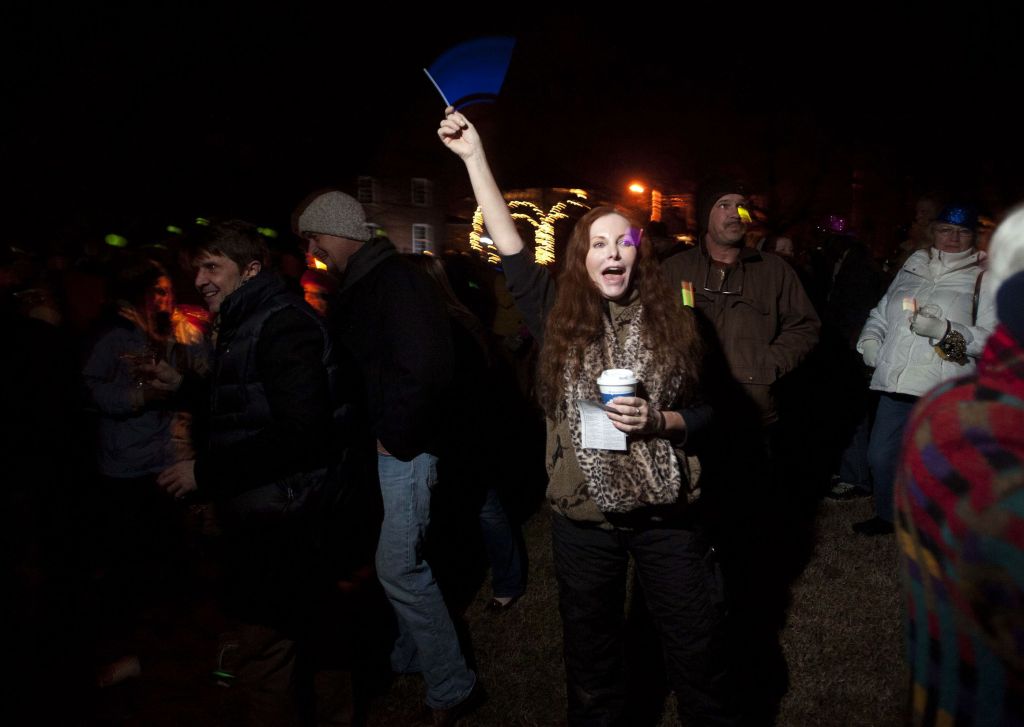 SALISBURY — People flocked to the corner of West Innes and Jackson streets to ring in 2014, despite the possibility earlier this week that there would be no New Year’s celebration at the old Presbyterian Bell Tower in downtown Salisbury this year.

At midnight, the crowd erupted with cheers, noisemakers and kisses then joined in singing Auld Lang Syne.

The mayor estimated there were 200 to 300 people in attendance.

In the past, Downtown Salisbury, Inc. coordinated the event, but this year the DSI board decided not to hold it, due to “limited staff manpower,” according to Molly Ruff, a project coordinator for the group.

Clyde has attended the bell tower celebration for nearly 40 years and was upset that the annual tradition was in jeopardy.

“We are not not having it. We’re having it,” Clyde told the Post on Monday. “We’ve had it every year. It doesn’t take anything. Bring your candles and bells.”

Clyde was not the only one who found breaking with tradition a bitter pill to swallow.

So, the City of Salisbury decided to carry on the tradition themselves.

“We just wanted to make sure that we didn’t let a time honored tradition fall by the wayside,” Hasselman said.

Woodson said that the City of Salisbury staff “started scrambling” to put together the event.

Blackwell called city council members and got a consensus to take on the celebration immediately, Woodson said.

Other staff members secured refreshments, entertainment, the livestream from Fibrant and trash services.

“Our staff has done a wonderful job on such short notice,” he added.

Carmen and Larry Swindel have been coming to the New Year’s celebration at the bell tower for five years now.

“We just like it. We usually run into friends here,” Carmen Swindel said.

McCombs said he was “really disappointed” when DSI announced that they wouldn’t be hosting the event this year.

“It’s nice to see the city council step up to the plate,” he added.

The tradition began in 1975, when Salisbury residents were selected to ring the bell in the tower’s alcove at midnight each year. However, after a construction advisor evaluated the tower in 2011, the structure was deemed too unstable to continue the tradition.

Instead, the festivities have been carried out with a retired Salisbury Fire Department bell at the foot of the tower.