A stroll with Skinny and Sandy

After a stormy Tuesday, Patrick Flynn couldn’t resist taking a stroll on a beautiful Wednesday afternoon.And others out in downtown Salisbury couldn’t resist taking a look when Flynn walked by.
Not that there was anything out of the ordinary about Flynn. It was one of his companions that caught folks’ attention. Along with his dog Sandy, who rambled along Main Street at the end of a leash, Flynn had an interesting passenger – or an odd choice of headgear, depending on your perspective.
Perched atop his noggin, clinging to a black ballcap emblazoned in white stitching with the message “I’m the Boss,” was Skinny, Flynn’s pet iguana. Flynn said he’s had Skinny for several years and always takes him along when walking Sandy. 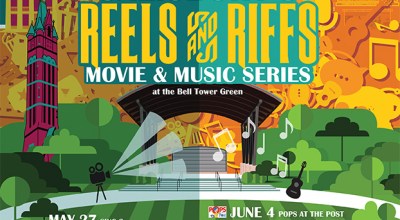