I’m convinced one of the greatest attractions to surf fishing in the Outer Banks is the fact that, when it comes down to it, you never really know what you are going to catch from one minute to the next. And, if you are doing it correctly, you don’t really care.
Black drum, speckled trout, whiting, toadfish, pufferfish — we never knew what was coming in the next time somebody set the hook and proceeded to reel in our next quarry.
As much as each of us wanted to catch a citation red drum, striped bass or even a chopper bluefish, the best we could manage was little black drum, whiting, and even some lowly toadfish. It didn’t matter. We had a blast. If there are children with you then you really know that catching, regardless of the species, is way better than just fishing.
Our results were easier to stomach when we considered that nobody, it seemed, was catching fish. We fished from the famous point at Buxton, near the Hatteras Lighthouse, all the way up to the Virginia state line on the four-wheel drive section of the beach north of Corolla and Duck. The story was pretty much the same everywhere you went.
Shrimp was definitely the bait of choice for the small fish. We threw cut bait all day, every day, just in case some big reds showed up. This is the time of year when big bull redfish do show up in the surf in the Outer Banks. It is not uncommon for anglers to catch 20-pound drum right from the beach. Bigger fish are caught on a regular basis as well.
We also used sand fleas, which the children delighted in catching throughout the day, to no avail. That is one bait that is usually a pretty reliable producer. But the fish just weren’t there to take the bait.
It seemed that most of the baitfish, and the predators that follow them, were well off the beach and out of reach of even the longest surf-fishing rod. We could regularly observe birds working bait a quarter-mile off the beach. Seen through binoculars, it was obvious that the fish were feeding heavily. We just couldn’t get our baits out to them.
One of the most dramatic things about this fishing trip was the obvious fact that there is still a great deal of cleanup going on from the effects of Hurricane Irene.
Debris is piled along the sides of the road. Mutilated campers and boats are scattered about. Many houses are still missing siding or shingles.
And we even saw one house in Rodanthe that was severely leaning to one side and seemed destined to fall right over. All along N.C. 12 there was sand piled high along the side of the road, looking just like snow that had been plowed off the street.
Many of the businesses we visited, especially Frank and Fran’s Bait Shop, were glad to have people back spending money there again.
Quite frankly, having the anglers and tourists back is the quickest way to recovery for these North Carolinians. 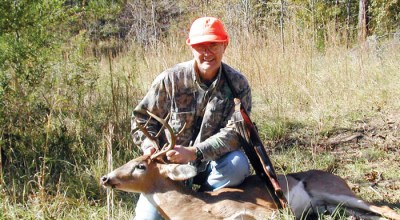