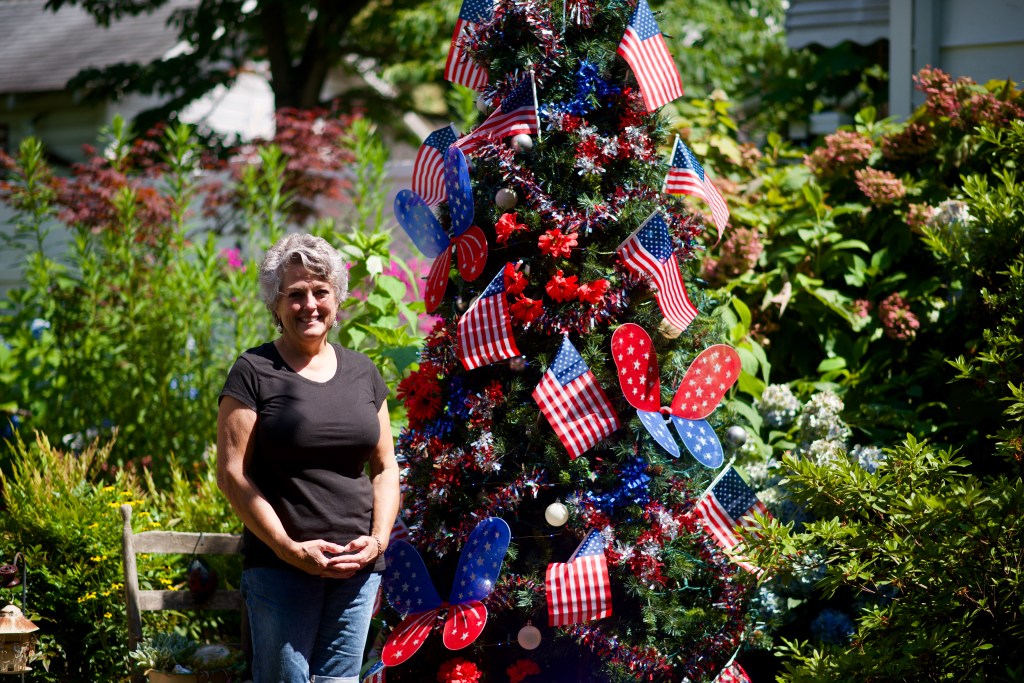 Carl Blankenship/Salisbury Post - Lisa Phelps with her seasonal tree. The tree goes up every December for Christmas but it has turned into a way to celebrate every month.

Phelps grew up in Faith, just a mile down the road from where she lives now. She’s a  beautician and has been in town for Independence Day for all but 14 of those 74 years. So, if she’s in town, she’s always been ready to revel in the Faith Fourth festivities — when the small town’s population swells to several times its size.

Phelps, like many townspeople, is disappointed about the cancellation for the first time in the event’s history. Unrelated to the pandemic, she decided to leave up her artificial, outdoor Christmas tree this year, which she always puts up in December to hold the usual Christmas decorations.

Phelps has changed the decorations on the tree each month this year, and has decoration plans through the end of the year. August will be flip flops and flamingos.

When January came around, she changed the decorations to a wintry theme, hearts for Valentine’s Day, shamrocks for St. Patrick’s Day, flowers for Easter and so on. She eventually arrived at July and had to make the tree’s theme the Fourth of July.

She says her clients enjoyed seeing the themed tree as they made their way into the small salon, situated just behind her house. Usually, the questions involve asking whether the tree is real.

When the Fourth of July theme came around, the new decorations have been a big hit. Phelps said her clients let her know they appreciated the patriotism of the display.

“The Fourth of July is kind of like a second Christmas to us,” Phelps said.

Her business was closed down, like many others, for a couple months, and her clients have been commenting on the tree as she reopened.

“Getting back into work I have been just really, really busy trying to get everyone caught up,” Phelps said. “What amazes me is that so many of my clients went two to three months without having haircuts, and when I contacted them they were so thankful to be able to get in. Not once have I had a complaint from someone having to wait just a little bit longer because of it being so booked. It has brought out a lot of good in people.”

Phelps said, if you live in Faith in a normal year, you’re sure to become involved with Independence Day festivities in some way. Since the parade is part of what the town is known for, she said it won’t be the same this year.

The annual celebration has attracted a diverse crowd and is well attended by locals and event a U.S. president. This year, Faith residents have planned smaller festivities, including a flag raising and memorial wall dedication, to keep the town’s patriotism alive.

Rowan County Public Health Director Nina Oliver described the cancellation as a responsible decision made by the Faith Fourth of July Committee on May 25. The celebration traces its roots to 1920, but events were inconsistent until after World War II.