College football: Catawba assistant coach Lockhart soon to be a Hall of Famer 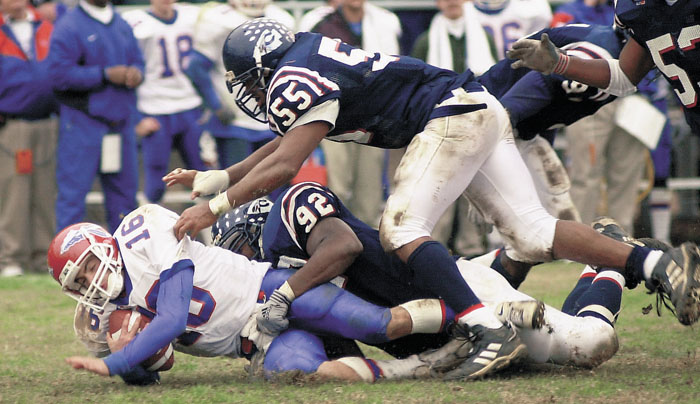 SALISBURY — Two decades ago, Catawba’s defense was sacking quarterbacks at a frightening rate and crushing running backs for losses at an even scarier pace.

“We’d check and see how many sacks Florida State (the 1999 D-I national champions) got that week,” said Radell Lockhart, who turned 40 in May. “We always wanted to get more sacks than they did. Florida State was the best. That was our competition. They motivated us.”

Catawba was motivated enough to set team defensive records that still stand. The Indians piled up a mind-boggling 151 tackles for loss during the 1999 season. There were 73 sacks, an average of  5.6 per game. Lockhart and running mates Devonte Peterson, Derrick Montgomery and David Huey etched their names in the Catawba record books.

Lockhart holds the school career record for tackles for loss with 103 and still ranks third all-time with 27 sacks. He was second until Kyle Kitchens passed him in 2017.

“With the overall defense we had, it wasn’t hard for me to get sacks,” Lockhart said. “We’d stop the run, get them in third-and-long, and then go after the quarterback.”

Lockhart, one of the memorable players from late-1990s Catawba football, will be inducted into the Catawba Sports Hall of Fame on Nov. 15.

David Bennett was elevated to head coach of the Indians prior to the 1995 season. Catawba would go 63-17 in Bennett’s seven seasons. Lockhart joined the fun in 1997, started his very first game in a Catawba uniform, and was an anchor for the defensive line through the 2000 season.

“I remember that first game in 1997 at Tusculum, all those fans yelling at us,” Lockhart said.

Lockhart is a product of Independence High in Charlotte. He started on the varsity for three years for a coach, Rusty Jester, who had played for Catawba in the early 1970s. Lockhart was 6-foot-3, 260 in high school. He not only sacked a lot of people for the Patriots, he was nimble enough to catch touchdown passes.

“The decision to go to Catawba, part of that was Coach Jester, but the biggest thing was that two of my Independence teammates (brothers Derrick Montgomery and Erick Montgomery) were already at Catawba,” Lockhart said. “I knew that would make the transition to college easier for me.”

Lockhart was more steady than spectacular in his first two seasons, accounting for five sacks.

The breakthrough for Lockhart, his teammates and a coaching staff that included defensive coordinator Richard Kent, defensive line coach Jim Tomsula and linebackers coach Curtis Walker, would come during the 11-2 1999 season.

Catawba enjoyed a seven-game winning streak between a South Atlantic Conference loss at Carson-Newman and a second loss at Carson-Newman in the Division II playoffs. Lockhart had 12 sacks, 45 tackles for loss and 40 quarterback hurries that season and received All-SAC and All-Region accolades.

The two most memorable games for Lockhart — both the most exhilarating and the most disappointing — occurred during his senior season in 2000.

Not surprisingly, his favorite memory is the Carson-Newman game that was played at Shuford Stadium on Oct. 28. Catawba came into that game ranked third nationally, while Carson-Newman was fifth.

Catawba’s defense  forced four turnovers and held Carson-Newman to 23 yards in the second half of a 13-10 victory that made the Indians 9-0 and had everyone thinking realistically about a national championship. Matt Gross kicked the winning field goal with one second left.

“As far as my most exciting games, that was it,” Lockhart said. “There were a lot of people there and fans rushed the field. We went on from there to win the conference.”

Catawba was 11-0 when it faced Delta State (Miss.) at Shuford Stadium on Nov. 25 in a quarterfinal game in the D-II playoffs. The Indians were favored, but Peterson was sidelined, and a cold, steady rain made for sloppy, slippery, miserable conditions that nullified Catawba’s passing game. Catawba had two field goals blocked. Catawba was 4-for-13 passing for 47 yards. Delta State passed for minus yards, but Delta State was a running team. The Statesmen out-rushed the Indians 339-125 and held on to win, 20-14. That was Peterson’s last college game.

“Delta State had a good running game, used a lot of quarterback keepers,” Lockhart said. “That was the hardest loss, because we believed we were the best team in the nation that year. There’s no doubt in our minds that if we’d won that game, we would’ve won the national championship. Delta State went on to win it all and did it easily.”

Delta State wiped out North Dakota State, 34-16, in the semifinals, a week after that Catawba game. In the national championship, it was no contest. Delta State set records and ran all over Bloomsburg, 63-34.

Lockhart received a truckload of accolades after that season, including SAC Defensive Player of the Year. He was named All-Region and to three All-America teams.

But not many Division II players get drafted. Peterson wasn’t.

He got a shot in camp with the Jacksonville Jaguars in 2001, made some sacks and raised some eyebrows, but he didn’t make the final roster.

The New England Patriots signed him in 2002.

That was the era of NFL Europe, spring football that the NFL used for player development and coach development. It was a place where young players hoping to grab a foothold in the NFL could gain experience.

Tomsula was coaching the defensive line for the Scottish Claymores of NFL Europe, and the Patriots allocated Lockhart to the Claymores. He was reunited there, not only with Tomsula, but with Peterson. Lockhart performed well  for the Claymores in the spring of 2002. He had three forced fumbles.

“It was a great experience, getting to travel and see another part of the world,” Lockhart said. “But most of the sports fans in Scotland are soccer fans, so that part was different.”

New England released Lockhart before the 2002 season started, but he returned to the Claymores in the spring of 2003 and was even better. He made 25 tackles, had six sacks and knocked down 10 passes.

The New York Giants got interested and signed Lockhart in the summer of 2003.

“The Giants camp, that was the camp where I really thought I had my best chance to make a roster,” Lockhart said. “All my teammates were telling me I was going to make it.”

But the Giants released him.

In 2004, he signed with Germany’s Frankfurt Galaxy in NFL Europe, started for them down the stretch  the final games and helped the Galaxy make it to the World Bowl, the Super Bowl of NFL Europe.

There would be more bouncing around the NFL after that. The Giants re-signed him and put him on their practice squad. He also spent time on the practice squads of the New York Jets and San Diego Chargers.

“I had preseason sacks for a whole lot of teams,” Lockhart said.

But he never got the break he needed, and his NFL dream slowly died. After the Chargers released him when their 2005 season was over, he was 26 and tired of practice squads and releases.

“It was time to move on,” Lockhart said. “And I had always known, even when I was back in high school, that I wanted to get into coaching someday.”

He was hired as a Catawba assistant when Chip Hester was head coach. His duties over the years have included not only coaching defensive linemen, but serving as academic coordinator and equipment coordinator.

When Walker was hired to replace Hester as head coach in December, 2012, Lockhart was one of the assistants who made the transition to a new staff, and he’s still with the Indians.

“Coach Lockhart is a guy I really wanted on our staff because the thing I remembered most about him from when I was an assistant coach and he was playing for Catawba was he always had such great fundamentals,” Walker said. “The proper fundamentals, hand placement and leverage, he was exceptional at those things. I knew he would be a great at teaching those things to our  young defensive linemen.”

Lockhart’s buddy, Peterson, also had a lot of football stops before finding his calling in law enforcement in Mecklenburg County more than five years ago.

Like the rest of the coaching staff, Catawba’s all-time leader in tackles for loss, is trying to come to grips with the Indians’ unexpectedly difficult season and a long losing streak.

“The injuries we’ve had, I’ve never seen anything like it,” said Peterson, who is married and has a daughter who will turn 4 in December.

Fortunately, Hall of Fame induction will leave him with at least one wonderful memory from 2019.