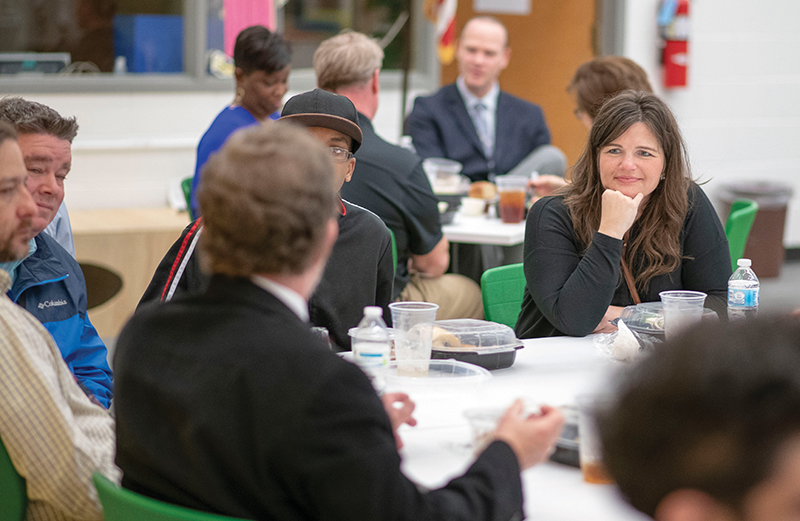 With some schools already starting to implement renewal plans and others still preparing plans, Superintendent Lynn Moody said she invited the legislators to the district to show off RSS’ work.

“We want to show how we’re using our flexibility in a different way,” Moody said.

Moody said she also hoped to start a dialogue about what the General Assembly, State Board of Education and Department of Public Instruction will expect from RSS at the end of the five years and how the district will be evaluated.

Because “renewal” is new in North Carolina, it’s difficult for anybody to understand it without seeing it in person, Board of Education Chairman Josh Wagner said.

“If the state hopes that this is successful here and can be replicated, they need to be able to understand and know what we have done, where are they now, where are they going and how did they get there,” Wagner said.

The renewal status means Rowan-Salisbury Schools will have unprecedented flexibility for a public school system, including its calendar, funding and personnel requirements. In some cases, renewal has allowed RSS schools to make changes that state regulations might have otherwise prevented. But regardless of whether a change would have been allowed, local educators have thought more creatively about what education in Rowan County looks like, Moody said.

At Knollwood Elementary, for example, the school repurposed its Title 1 funds — distributed to schools with a high percentage of low-income students — from being used for remediation classes to field trips and experiences outside the classroom, said Principal Shona Hairston.

Knox Middle School Principal Michael Courtwright said his school has repurposed funding to hire “highly trained” teachers at a salary that, in some cases, is equal to assistant principal or principal pay. Six teachers, Moody said, have a base pay of at least $75,000 a year. That helps the district compete with surrounding counties as well as much larger districts such as Charlotte-Mecklenburg and Wake County.

At South Rowan High School, Principal Kelly Withers said, money has been repurposed from paying for a staff position to professional development. That’s allowed for trips across the country to learn about practices in other school districts. 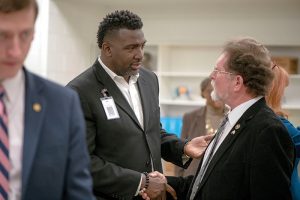 Because of her role as co-chairwoman of the education committees and that Rowan-Salisbury is entering uncharted territory, Ballard says she wants to “get in and see what’s working, what students and teachers are doing.”

“We talk a lot about local control and flexibility in education. So let’s see what it really looks like and how can we do it,” she said. “How do you untangle years and years and years of bureaucracy while also maintaining and improving student outcomes?”

On Friday, Ballard and Pittman spoke with ninth-graders at North Rowan in the school’s design classroom about their experience with renewal, as a number of schools in the district are “restart schools” and already granted some charter-like flexibility. After that, Pittman said it is clear that the students are success stories and asked about broader outcomes of the renewal project.

Moody told the crowd of staff members, students and school board members that nine to 10 schools in RSS are “on fire.” Two principals have said they’re not sure renewal is right for them, and the rest are somewhere in the middle.

North Rowan teacher Kimberly Greer said some students are adapting well to new teaching techniques. Others are not. However, Greer said, teachers are able to tap into what students are passionate about to teach them about subjects they may not have been interested in otherwise.

“They have the opportunity to learn without the fear of whether it’s going to be on a test or an exam,” Greer said.

Exactly how the school system will be judged on its “renewal” is not yet clear, as N.C. State University’s Friday Institute will begin designing those standards in April. Also in April, individual schools will present renewal plans to administrators and the school board. Moody expects some to include relatively small changes while others are further ahead in planning and will have “more dramatic plans.” 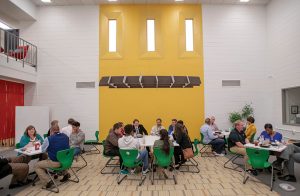 One things seems clear, according to RSS staff and state legislators: test scores won’t be the best way to judge success.

Pittman told those gathered Friday that he feels state government is “chasing its tail” by using test scores and letter grades to judge public schools. Letter grades are well intentioned but are not useful now, he said.

Ballard told the Post there must be accountability for districts and individual schools, but it’s unclear what that should entail.

“Who knows? That could be transformed. That’s part of why we’re here today,” she said.

As districtwide renewal gets closer to its launch date — next school year — Ballard said she’ll be paying attention to the district’s leadership — from the administrative office to classroom teachers.

Speaking to the group, Pittman said RSS should make sure state Superintendent of Public Instruction Mark Johnson is aware of the good work Rowan-Salisbury Schools is doing and that more of it is needed across the state. Pittman told school staff members he would “back you up on that.”

“They can’t argue with the evidence,” Pittman said.