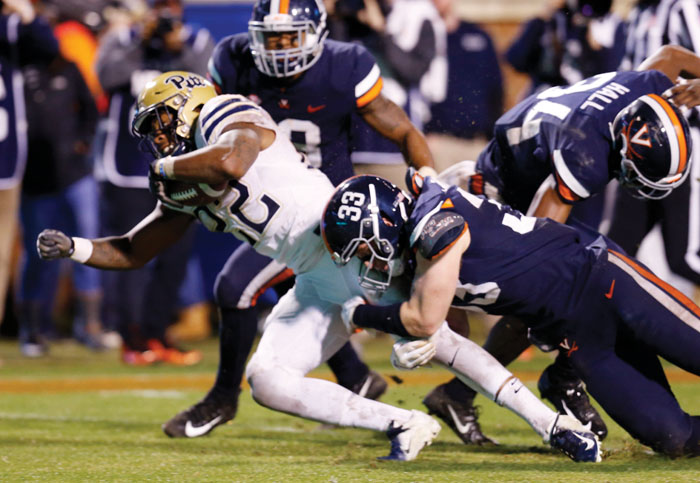 Pittsburgh running back Darrin Hall (22) lunges into the end zone for a score as Virginia linebacker Zane Zandier (33) holds on during the second half of an NCAA college football game in Charlottesville, Va., Friday, Nov. 2, 2018. (AP Photo/Steve Helber)

By HANK KURZ Jr., AP Sports Writer
CHARLOTTESVILLE, Va. (AP) — Darrin Hall ran for 229 yards and three touchdowns and Pittsburgh beat No. 23 Virginia 23-13 on Friday night.
Hall scored on runs of 41, 2 and 75 yards, the latter a play after Virginia closed to 14-13 in the fourth quarter. The Panthers (5-4, 4-1 Atlantic Coast Conference) botched the extra point attempt but forced a three-and-out by the Cavaliers and went on to their fourth consecutive victory in the series. Alex Kessman’s 53-yard field goal, his fourth from 50 and beyond this season, padded the lead.
Bryce Perkins threw for 205 yards and a touchdown for Virginia (6-3, 4-2, No. 23 CFP), but Pittsburgh never allowed him to get untracked in the running game and sacked him five times for 46 yards in losses. The Cavaliers’ three-game winning streak was snapped as Pittsburgh took over first place in the ACC’s Coastal Division.
Pittsburgh trailed 10-7 at halftime, but used a 15-play, 84-yard drive to go ahead. The Panthers converted four third downs on the drive and Hall finished it with runs of 18 and then two yards as the Virginia defense, which lost three starters to injury during the game, began to wear down. After being limited to 24 plays in the first half, the Panthers ran 21 in the third quarter alone, mostly grinding on the ground.
The Cavaliers drove for Brian Delaney’s second field goal, bringing the crowd alive, but Hall quieted them with his long scoring burst.
THE TAKEAWAY
Pittsburgh: The Panthers are very much a power running team, but Darrin Hall especially has break-away speed, too, as he showed on his long scoring runs. With tailbacks Hall and Qadree Ollison each weighing in at 225 pounds, their bruising style wore Virginia down during two long possessions to begin the second half.
Virginia: The Cavaliers to find more offensive weapons to employ when teams focus great attention on Perkins, Olamide Zaccheaus and Jordan Ellis. Terrell Jana’s 42-yard touchdown catch more than doubled his receiving yardage for the season (29), and he caught two more passes before halftime. And tight end Tanner Cowley had just three catches for 28 yards in the first eight games before taking a pass from Perkins 40 yards down the Virginia sideline in the first half.
UP NEXT
Pittsburgh returns home to face long-time rival Virginia Tech in its final home game.
Virginia wraps up a three-game homestand with its final home game, and last out-of-conference game, against Liberty.
___
Follow Hank on Twitter: www.twitter.com/hankkurzjr
___
More AP college football: https://apnews.com/Collegefootball and https://twitter.com/AP_Top25