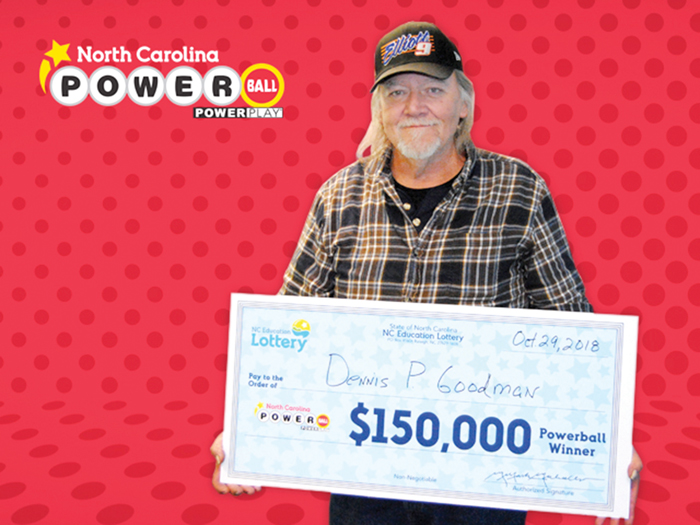 Submitted photo Dennis Goodman of Landis with his check for $150,000 won in Powerball.

RALEIGH – Dennis Goodman of Landis said his luck was so bad, he told his sister to buy her own Powerball ticket Saturday because “you don’t want me touching yours.”

But Goodman’s luck changed with that night’s drawing, making him one of the luckiest Powerball players in North Carolina.

“I won $150,000,” Goodman said he yelled to his sister about midnight Saturday when he checked his ticket. “She didn’t believe me. I had to show her the ticket. It was a real exciting time. I didn’t expect to even get my money back.”

Goodman’s $3 Power Play ticket was one of three in North Carolina that matched four of the white balls and the Powerball in the drawing to win $50,000. Because he purchased the Power Play feature, the prize was tripled to $150,000 when the 3X multiplier was drawn.

He bought his ticket, which beat odds of 1 in 913,129, at Love’s Travel Stop on Peeler Road in Salisbury. After federal and state tax withholdings, he received $105,752.

Goodman said he plans to use his prize money to pay some bills, get dental work done, and fix up some old cars, including his 1994 Chevy S-10 with 230,000 miles on it.

For fun, he said, he would like to spend a week at the beach pier fishing.

Tickets sold in New York and Iowa won Saturday’s jackpot. Wednesday’s jackpot resets to $40 million as an annuity, or $23 million in cash.

Draw games like Powerball make it possible for the lottery to raise more than $650 million a year for education.

For details on how lottery are used in the state’s 100 counties, click on the “Impact” section of the lottery’s website.

One of two most-wanted suspects arrested in Oct. 19…