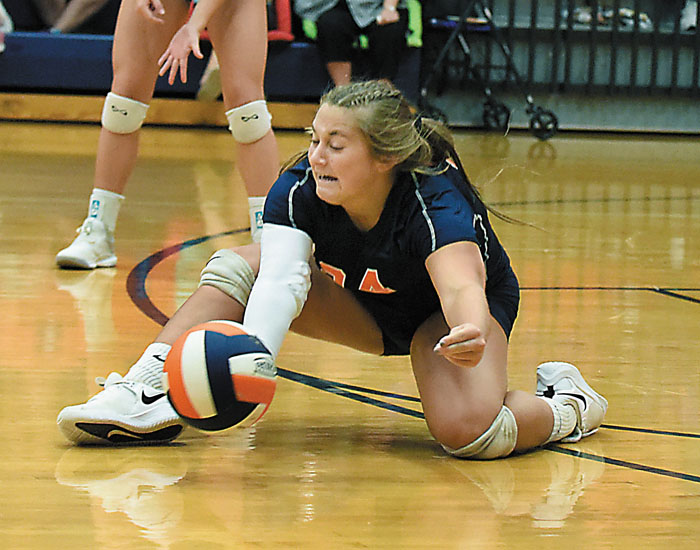 CHINA GROVE  — For most good teams, volleyball is a game played in the air, played above the net by tall girls with exceptional vertical jumps.

But Carson is a little different. Except for 5-foot-6, iron-fisted sky-walker Mallory Weast, the Cougars play the game on the floor or a few inches above it and play it with no one taller than 5-foot-8. They win with the dig, the serve-receive and the pass, by playing the angles and by making fewer mistakes. They win with communication and defense.

Talented South Iredell, seeded fourth, was skying to the rafters in the Carson gym on Saturday morning, but the Cougars, seeded second, kept doing what they do best and calmly took the Vikings’ best shot. Carson won a ferocious North Piedmont Conference Tournament championship match 25-22, 25-23, 23-25 and 25-15.

“The difference today was Carson’s libero,” South Iredell coach Megan Skouby said. “I don’t know what class she’s in and I don’t even know what her name is, but she carried them. That girl was everywhere. She was amazing. She made digs that just aren’t made. Everyone focuses on the kills, but defense is just as important. That girl simply would not let us put the ball down. Props to her.”

Skouby was talking about 5-3 Carson sophomore Kary Hales, who has unusual court awareness, anticipation, determination and eye-hand coordination. She can also crush softballs.

“I do think our defense leads us,” Hales said. “Our offense helped out a lot today, but we put so much work and effort in practice into defense. If you can keep digging balls, you can frustrate the other team. You can tire them out.”

Carson (23-3) has only two girls who rack up consistent kills — Weast and 5-8 sophomore Jaden Vaughn, who doesn’t leap high but has wonderful timing and a textbook arm swing. Vaughn is extremely efficient, rarely hitting long or wide or into the net, always finding open spaces to attack. Weast and Vaughn had five kills each as the Cougars took the first set.

Vaughn had the kill that stretched Carson’s lead to 21-18.

After Emily Long blasted a kill to get the Vikings within 23-22, Carson’s senior setter Grace Thomas found Vaughn for another critical kill for 24-22.

Then Hales made an impossible dig that the Cougars quickly converted into a set-clinching kill by Weast.

South Iredell’s Marissa Meyerhofer and Taylor Osborne were terrific in the second set.

When Meyerhofer and Savannah Harris went airborne to stuff Vaughn at the net, the Vikings led 11-7. A diving dig by Malina Harris ricocheted for an unusual kill for 12-7. Down 13-7, Carson appeared to have slim hope of salvaging the set, but the Cougars regrouped and came back.

“South Iredell was playing really well on defense today and those girls swing hard,” Weast said. “We needed to be really solid.”

Weast, with some help, made the soaring block that trimmed Carson’s deficit to 14-12 and turned the set around.

Again Weast stepped forward. Her blistering kill ripped through a trio of Vikings. When South Iredell couldn’t handle a serve by Vaughn, and the Cougars had pulled out the set.

Carson led the third set, 17-16, when Thomas was called for back-to-back double hits. Malina Harris smashed back-to-back aces, and the Vikings pushed to some four-point leads.

Carson got back to 23-all when Hales kept a wicked kill attempt in play, and Weast delivered the tying kill for Carson.

The Vikings had momentum, but Carson snatched it back quickly as the fourth set got under way.

“We knew we needed to get on a run quickly,” Weast said. “How that set started was going to be very important. We served very aggressively, and that helped us.”

Thomas was finding Vaughn and West, and they put Carson up 7-3 in a hurry.

Then senior middle blocker Nancy Gamewell took over for several minutes. Gamewell’s block made it 8-3, her kill made it 9-3, and she had another kill as Carson’s lead reached 14-5.

“That girl got big blocks, blocks when they really counted,” Skuby said.

South Iredell tried to fight back, but Weast (17 kills) whistled three straight non-returnable attacks to push Carson’s advantage to 19-11. When Gamewell and Thomas combined for a block and a 20-11 lead, Carson fans were getting to their feet, sensing victory.

Vaughn got her 13th kill of the day for a 24-13 lead. Then Thomas won a scrap at the net for the final point of the set and match.

“I was on the jayvees for two years, always admiring and looking up to those girls who were ahead of me,” Gamewell said. “I dreamed of helping us win a championship one day, but I never thought it would happen. I’m thankful my coaches and teammates believed in me and kept pushing me even when I was making mistakes.”

Gamewell’s blocks were huge in the tournament.

“Gamewell was a jayvee two years, but that’s the plan, to keep working, to keep improving, and to be ready when it’s your time,” Rogers said. “We have a program. We want to be good, not just for one year, but every single year. I’ve been at Carson 10 years and we’ve been good nine of those years, with one decent year.  We had sophomores on our jayvees this year who can play, and their chance to step in will come,”

As far as this year, The playoffs start Tuesday, and South Iredell will be flying around and causing major problems for somebody.

Carson will be at home, likely as a No. 3 seed in the 32-team 3A West bracket. The Cougars will play mostly on the floor, but they’ll be hard to beat.

“To be regular season co-champions (with West Rowan) and tournament champions in a league as good as ours, it means something,” Rogers said. “You can’t say enough about how hard this league is.”