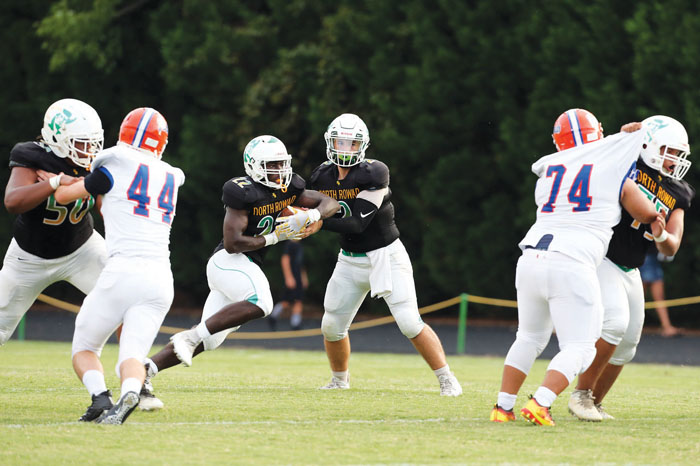 North Rowan QB #2 Willis Mitchell hands off to #22 Malcolm Wilson for a 28 yard pickup to start the game. James Sipes for the Salisbury Post 8/30/2018

“We actually started out sluggish,” North head coach Ben Hampton said. “It was 21-0 late in the second quarter, but we got two touchdowns near the end of the first half to get up 35-0. Then we scored on our first possession of the second half, it was 42-0, and we had a running clock.”

North’s defense registered its fourth shutout in the last five games, and the Cavaliers (6-1, 3-0) stayed unbeaten in the Yadkin Valley Conference.

“Our defense played at a high level again,” Hampton said.

Cornerback Spencer Everhart made his second interception of the season and had three pass breakups. Linebacker Nautica Patterson was North’s leading tackler.

Malcolm Wilson, the county rushing leader, scored three touchdowns and has 15 for the season. He rushed 17 times for 256 yards.

JD Weaver was 7-for-8 kicking PATs.

1A North has won five straight since falling to 3A West Rowan on Aug. 24.

Next for the Cavaliers is a showdown at home against North Stanly (6-2, 4-0) that should decide who wins the YVC. North Rowan is ranked sixth in 1A, while North Stanly is seventh.

“We know what’s on the line,” Hampton said. “It’s a really big game, and we’re glad it’s going to be at home.”