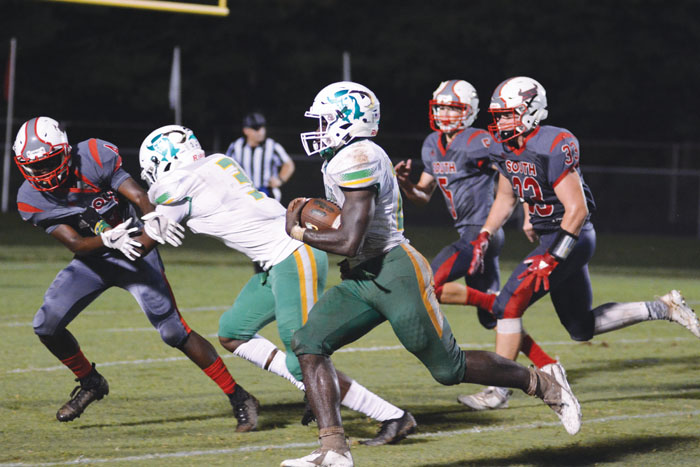 NORWOOD — After three weeks of no football games, North Rowan traveled to South Stanly on Friday night with its head coach, Ben Hampton, hoping his team showed no signs of rust.

Hampton also wanted to see his offense have a breakout performance.

The engines of the Cavaliers’ offense showed no signs of rust, running full speed throughout the first two periods, in a 42-0 win over South Stanly.

North Rowan (4-1, 1-0 Yadkin Valley Conference) dominated the first half on both sides of the football. The Cavaliers racked up 367 total yards of offense, scoring six touchdowns on offense.

Running back Malcolm Wilson did not reach 100 yards, as he had the previous four games, but he found the end zone four times on the ground. As a team, North Rowan had 131 net rushing yards on just 15 carries, averaging 8.7 yards per attempt.

It was through the air where North Rowan did the most damage. In the first 24 minutes, quarterback Willis Mitchell threw for 236 yards, completing 10-of-14 passes — throwing two touchdowns to Shymek Lyles. For the game, Lyles had 132 receiving yards on three catches.

For the game, Cooke was 2-of-11 for 17 yards and was under pressure much of the night. He was sacked once but avoided being sacked several times by scrambling and getting out of bounds.

“We don’t expect to get turnovers, but we like to get them,” Hampton said. “We always tell (our offense), if you turn the ball over you can’t defend it.”

Regarding the long layoff, Hampton said “the fear in the head of coming off of two open weeks and three weeks of practice was rust. Our kids came out ready to play.”

Hampton’s offense was aggressive through the air early in the first quarter after a fumble on a handoff went to the Cavs. North Rowan turned the ball over on downs at the Bulls’ 20-yard line, but the defense got the ball right back by forcing a three-and-out.

Wilson found paydirt on his first touch of the game, going up the middle and cutting left for a 45-yard touchdown run. JD Weaver’s extra point put the Cavs up by a touchdown with 8:22 left in the first quarter.

On South’s next play from scrimmage, Khris Mayo, who entered the game as the Bulls’ leading rusher, fumbled and the Cavs’ Tyzai Lyles recovered.

“We had the mindset of if we had the ball from the 50 in, we were going to take a poke early,” Hampton said, about putting the football in the air.

Mitchell did just that on the Cavs’ next possession, finding a wide-open Shameek Lyles in the middle of the field for a 59-yard touchdown strike.

The duo hooked up again minutes later with Lyles breaking two tackles to scoot into the end zone. The extra point was blocked, leaving the visitors up, 20-0.

South looked to have built momentum on the final play of the first quarter with Seth Morton sacking Mitchell on third down.

As the teams switched end, North Rowan turned the tables on South Stanly, doing something the Bulls have done multiple times this season — run a fake punt play.

This time, Zay Davis ran for 26 yards to keep the drive alive. Wilson scored from 16 yards out to make it 27-0, early in the second quarter.

South then pinned the Cavs deep with a punt at the nine-yard line where the two teams exchanged possessions.

North Rowan’s longest drive of the night came next as the Cavs went 89 yards in just six plays, including passes of 31 and 41 yards from Mitchell to Wilson and Lyles. Wilson’s one-yard plunge into the end zone and a two-point conversion put the visitors up, 35-0, with 2:38 left in the first half.

Davis’ interception in the final minute of the first half set up a 30-yard scoring drive, capped by Wilson backing into the end zone as the clock expired.

Both teams went deep into the bench in the running-clock second half. South’s best drive of the night started around the five-minute mark and extended into the fourth quarter. The Bulls went from the team’s own 9-yard line, down to the Cavaliers’ 36, but another lost fumble ended the drive.

South continued to try and throw long in the waning minutes of the game but Cooke’s last pass was picked off by Sifford on the final play of the game.