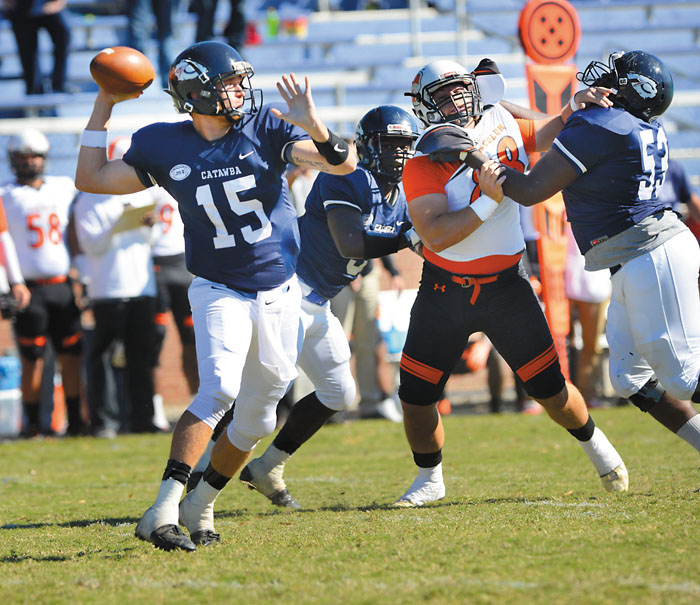 Catawba quarterback Reid Carlton, shown against Tusculum in a game from 2016, passed for 363 yards and three touchdowns on Saturday at Mars Hill. Carlton’s performance was not enough as the Lions topped the Indians, 39-33. ... Wayne Hinshaw file photo/for the Salisbury Post

It was impossible to see the Lions’ wild, 39-33 victory coming because coach Tim Clifton’s team entered the game with an 0-3 record and appeared to be heading nowhere. The Lions had surrendered 59 points in an ugly SAC loss to Lenoir-Rhyne  and they’d fallen by 18 to Shaw, a lightly regarded CIAA club that went 3-7 last season.

The ray of hope for Mars Hill (1-3, 1-1) amid the early-season gloom was receiver Craig Rucker, who came into Saturday’s action ranked in the top 10 nationally in receiving yards. Catawba couldn’t contain Rucker down the stretch. He  hauled in passes for the Lions’ last three touchdowns. The last of the three came with just 30 seconds left, broke a 33-all tie and proved decisive.

“Mars Hill had a really good offense last year and they’re good on offense again this year,” Catawba head coach Curtis Walker said. “Hats off to their staff. They did a couple of things today that we didn’t expect, things that really helped them.”

Putting the ball in the air 42 times on a day when Catawba (1-2, 0-1) was usually playing uphill, quarterback Reid Carlton completed 25 passes for 363 yards and three TDs. Will Sweeper and Jourdan Osinskie combined for 217 receiving yards. Catawba also ran effectively, with backs Kenyatta Greene and Demonte Good teaming for 141 rushing yards.

“We had brights spots all over, and I commend our offense for giving us an opportunity to win the game,” Walker said. “But we have to put offense, defense and special teams together. We didn’t play well enough on defense to win.”

Mars Hill owned most of the first half with its ground attack. Jacques Buchannon, a 220-pound junior college transfer, accounted for 224 of Mars Hill’s 354 rushing yards, including a breezy,  76-yard romp around the right side in the second quarter. Two Indians made unsuccessful dives at Buchannon near the line of scrimmage. He kept rolling, and then out-sprinted everybody down the sideline.

“They had long runs that inflated those rushing stats some,” Walker said. “But they did run the ball well and we didn’t tackle very well.”

Buchannon’s breakaway gave Mars Hill a 12-3 lead, but Catawba got back to 12-9 when Greene snagged a screen pass, shrugged off  a solid blow from a tackler who had a clean shot at his legs, and churned through would-be tacklers to the end zone.

Down 19-9 late in the first half, Catawba appeared to finally change momentum when Carlton hit Sweeper with a deep pass for first-and-goal, and then scored a TD on the ground from the 4. Lee Brackman’s PAT cut the deficit to 19-16, and the Indians headed to the locker room confident, knowing they’d have the ball first in the second half.

Catawba’s first possession of the second half netted a 40-yard Brackman field goal for a 19-all tie.

A riveting game would see-saw crazily from that point. Down 26-19 after Rucker’s first TD in the third quarter, Catawba made it 26-all when Chris Thompson picked off a pass, the first turnover all day, and gave the Indians a short field. Freshman Chylon Thomas got the touchdown for the Indians with a remarkable catch of a low throw to the end zone by Carlton, who put the ball where only Thomas had a chance at it. Thomas corraled the ball an inch off the turf at Meares Field and held on. Brackman’s PAT made it 26-all with 9:12 remaining, but Rucker was just getting warmed up.

Mars Hill tried to mount another drive. Catawba appeared to have the Lions stopped at the Catawba 33, but Rucker ran for 12 crucial yards on a fourth-and-6 situation.

With 2:08 remaining, Rucker was running free behind the Catawba secondary, and Brown didn’t miss him.

The Indians trailed 33-26 —  but not for long. Carlton found Dre Dunbar for 16 yards and Osinskie for 9. Then he hit Sweeper in stride for a 38-yard touchdown with 1:34 remaining. It was a beautiful play, and Brackman’s PAT made it 33-all with 1:34 left.

Catawba was one stop away from getting the ball back, but the Lions converted a desperate third-and-15 at their 23. With 30 seconds left, it was Brown-to-Rucker one more time for six. The PAT was blocked, but the Lions led 39-33.

Catawba came close, painfully close, to getting a miracle touchdown on the game’s final play. The Indians had calmly moved to the Mars Hill 36 with three straight sideline completions. As time expired, Carlton launched a soaring “Hail Mary” toward a pack of Indians and Lions waiting in the end zone. Osinskie got a hand on the ball, but couldn’t quite grab it, and Malcolm Means, who already had broken up a sure TD pass to Sweeper, picked off the deflected aerial for the Lions. Ironically, that was Catawba’s only turnover of the day.

While Brown, Rucker, Means and Buchannon had their fingerprints all over Catawba’s demise, there were still plenty of opportunities to win.

Catawba’s defense just didn’t get it done on that big fourth-and-6 and on that even bigger third-and-15. Mars Hill was successful on 10 of 16 third-down conversions. The Lions were superior on third down to the Indians, who were 4-for-12.

“We just couldn’t get our defense off the field on third down, couldn’t get those key stops,” Walker said. “We were not in synch today.”

Catawba hosts Carson-Newman next Saturday afternoon. Next for Mars Hill is a road trip to Limestone.