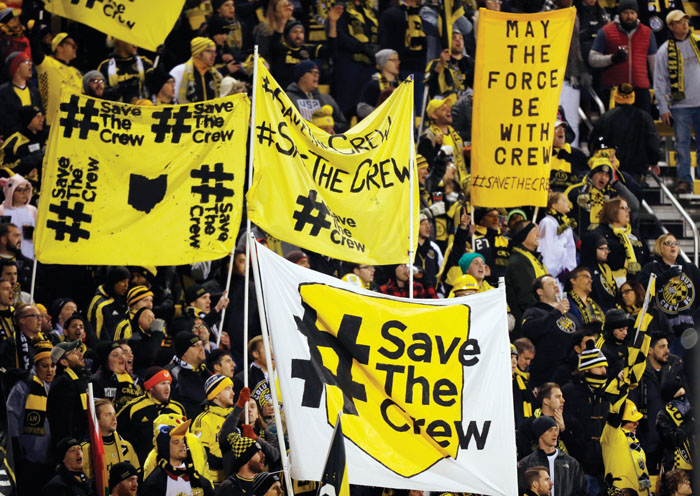 FILE - In this Oct. 31, 2017, file photo, Columbus Crew fans show their support for the team before the start of their MLS Eastern Conference semifinal soccer match against New York City FC in Columbus, Ohio. The Austin City Council is scheduled to decide Wednesday, Aug. 15, 2018 whether to move ahead with a stadium plan that could prompt Major League Soccer’s Columbus Crew to leave its home city after 22 years. (AP Photo/Jay LaPrete, File)

AUSTIN, Texas (AP) — Columbus Crew owner Anthony Precourt got a major boost to his effort to move the Major League Soccer club to Texas when the Austin City Council voted Wednesday to move ahead with a plan for a new, privately funded stadium on city land.

Precourt has been courting Austin for a potential move since late 2017 and has sought a deal to build a 20,000-seat stadium on 24 acres of city property in time for the 2021 MLS season.

Austin is the largest metropolitan area in the country without a major league sports franchise. The 7-4 vote allows city staff to “negotiate and execute” a stadium plan with Precourt Sports Ventures. The final contract would not need another council vote.

The San Francisco-based investor bought the Crew in 2013 and moving the team would uproot a bedrock MLS franchise that won the league championship in 2008. The Crew is in the hunt for a playoff berth this season. Precourt has said he wants to move because of poor attendance, lack of corporate support and an aging stadium in Columbus.

Precourt’s plans have upset Crew fans in Ohio. Fan groups have rallied to try to save their team with pledges for future season tickets and pleas for local investors to step in to buy the team.

Ohio and Columbus officials have also sued Precourt and MLS to stop or slow down the move. Ohio law requires teams that use tax-supported facilities and accept state financial assistance to give six months’ notice and give local investors a chance to buy the team. The law was enacted after the NFL’s Cleveland Browns moved to Baltimore in 1996.

“This city is excited about Major League Soccer. I am, too,” Adler said. “I can’t wait until we are all wearing the same jersey.”

Precourt will pay for construction, pay rent, and must address local transportation needs to help get people to and from the stadium. The team will not have to pay property taxes.

The Austin stadium has critics who call it a giveaway of city property that could be used for affordable housing or parks. The land has been vacant for more than 20 years but is near a rapidly expanding, high-end retail and condominium project.

“A soccer stadium is a want, not a need,” said council member Allison Alter. “Stadium deals represent a race to the bottom by cities.”

MLS Commissioner Don Garber has said the league is reluctant to see one of the original franchises move, but has also backed Precourt’s desire to look for a new home. The league declined comment on Wednesday’s vote.