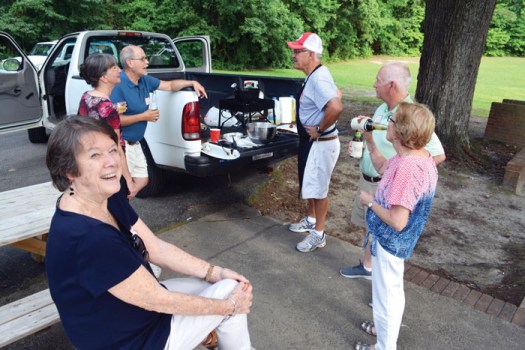 Jean Owen, foreground, with Carla and Jim Mallinson, Tony Withers, and John and Paula Shaver Rigsbee at a meeting of the Salisbury-Rowan Society of the Triangle. Susan Shinn Turner 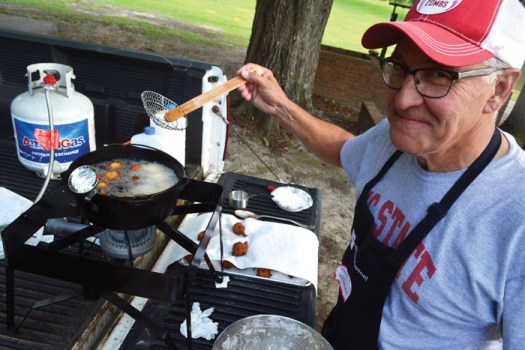 Tony Withers cooked up a beautiful tray of hushpuppies, but the group razzed him for not buying enough batter. The hushpuppies quickly disappeared on the buffet table. He was at the Raleigh meeting of the Salisbury-Rowan Society of the Trianagle. Susan Shinn Turner 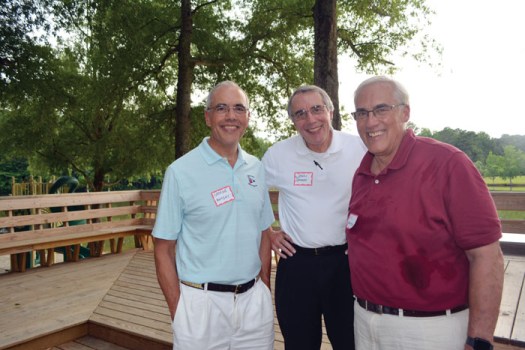 All three sons of the late John Irwin and Jean Ramsay attended the get-together of the Salisbury-Rowan Society of the Triangle. From left, George, John and KC. Their sister, Anne Saunders, still lives in Salisbury. 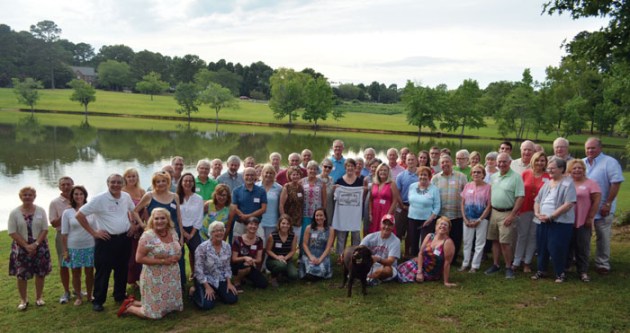 About 65 people attended the first event for the newly reformed Salisbury-Rowan Society of the Triangle on June 28 at Lake Montague in Raleigh. Susan Shinn Turner

“I haven’t seen you in a hundred years!”

“We used to live in Fulton Heights, remember?”

The conversation flowed, and friendships were formed and renewed as about 65 members of the new Salisbury-Rowan Society of the Triangle met last Thursday at Raleigh’s Montague Lake.

The society is the brainchild of Phil Kirk, a Rowan County native who has lived in Raleigh on and off since 1972.

“No one can fully explain how Steve Zaytoun of Cary got involved except that he was friends with all of the ‘originals,’ including me. While we don’t have officers for the group, we have agreed that Steve can be the sergeant-at-arms for the larger society.”

Kirk said plans for a get-together started more than a year ago. A similar one was held in 1999 with barbecue from Salisbury and Cheerwine, but no other gatherings followed.

Eventually, he and some of his breakfast group members came up with a list of 170 names. Some 60 people responded to the June 28 invitation, with another 35 expressing regrets because of vacations or other commitments.

Kirk knew the interest in such a group was there. Every high school in the county but Carson (because it’s relatively new) was represented. All three sons of John Irwin and Jean Ramsay attended. KC, an architect, attended N.C. State University and never left Raleigh. George moved to Atlanta, then to Raleigh, and now works in the health insurance business. Also an architect, John worked at his dad’s firm in Salisbury before moving to Raleigh.

Susan Green Coulter talked with Rob and Mandy Monath about life in Fulton Heights. Rob Monath, an attorney, moved to Raleigh at a client’s request. Mandy Monath is a data analyst at Carolina Population Center, where she worked years ago.

Coulter has lived in the Raleigh area for 26 years. She and her husband, David, came for jobs — she as a speech pathologist and he as a health care administrator — although they’re retired now.

“He birthed a lot of people here, probably,” she said.

Bayard Alcorn attended N.C. State in the late 1970s. He’s now semi-retired from the N.C. Division of Parks and Recreation. His wife, Sally, was a teacher.

John and Paula Shaver Rigsbee came to the area in 1976. Paula graduated from West Rowan High School. John, who’s from Durham, said he was the “accompanying spouse” for the evening.

Behind the spacious picnic shelter, Tony Withers fried hushpuppies. He’d never made them before, but John Rigsbee pronounced a sample “just right.”

The group did razz Withers, however, for not purchasing enough batter. The tray of hushpuppies went quickly on the buffet table.

Withers enrolled at N.C. State in 1975 and stayed in Raleigh because he liked the area. He delivered the Post for five years, he said.

A civil engineer, he sold his company four years ago but still keeps an office there.

Steve Zaytoun is one of Withers’ best friends — which explains his honorary membership in the group. (It’s also on good authority that he helped pay for the use of the picnic shelter.)

Gary and Lisa Cline have been in the area since 1983. Gary is an architect with Cline Design Associates. The Clines met in Omaha, Nebraska, when Gary went to junior high and high school.

“Our son is getting married in Salisbury in September,” Lisa Cline said.

He and fiancee Zhevon Cole will marry at The Abbey and plan their reception at Salisbury Depot.

Julia and Keith McCombs have been in Raleigh for 41 years. He is retired from the N.C. Department of Revenue, and she is a sales rep for an education software company. Their son, Eric, and his wife, Kelli, also attended. They recently moved to Raleigh from Charlotte.

The group’s newest members are Jim and Carla Mallinson, who moved to Zebulon in September to be closer to their grandchildren. Their son Stephen and daughter-in-law Melanie live in Raleigh with their daughter, Evie, almost 2. Their daughter lives in Baltimore with her two children, and the Mallinsons are now 2½ hours closer to them than when they lived in Salisbury.

“We love it here,” said Carla Mallinson, who’s retired from the Rowan County Department of Social Services. Jim retired from UNC-Charlotte and from his own counseling practice.

Deborah Busby Coclanis moved to the Raleigh area when her husband took a job at the University of North Carolina in 1984, she said.

“We’ve been here a long time.”

“She was one of my students,” Kirk noted.

“I had him in seventh grade,” Coclanis said.

“It think it was my first year teaching,” Kirk added.

Jean Owen moved to Carol Woods in Chapel Hill in 2005. Jean Ramsay — her good friends called her “Jean A,” since her middle name is Anne — lived at Carol Woods from age 65 to her death at age 91.

The Ramsay brothers and Jean, a retired educator, debated which one looks more like their dad and which looks more like their mom. KC Ramsay brought 24 pounds of barbecue from College Barbecue. Jay Owens told him not to get much slaw because people don’t eat it. He was wrong about the Salisbury group, which devoured all the slaw that was there.

As the group gathered before a bounteous dinner that also included baked beans and plenty of desserts, Kirk said the society will offer two or three gatherings each year. The next plans are for train rides to Salisbury — one during the weekday for adults and one on the weekend for families.

Anyone who is from Rowan County who now lives in the Triangle can be added to the email list of the Salisbury-Rowan Society of the Triangle. Contact Phil Kirk at phillipjkirk@aol.com.