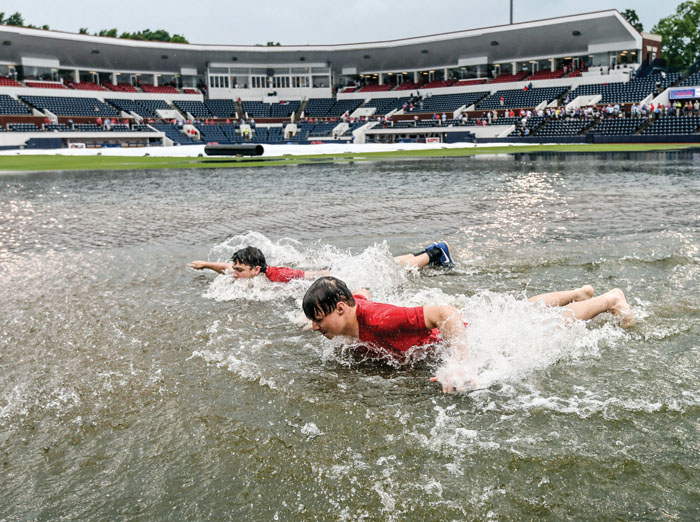 Busch had a two-run double in the third inning and a three-run homer in a five-run fourth for the Tar Heels (39-18). UNC finished with 10 hits and got a strong outing from starter Cooper Criswell (5-2), who allowed three hits with six strikeouts in six shutout innings.

Greg White had two hits for the fourth-seeded Aggies (32-24), who are making their second postseason appearance in program history and first since 2005. North Carolina A&T finished with just five hits and had four errors, leading to four unearned runs.

Drew Henrickson added three RBIs to help the top-seeded Pirates (44-16) earn a matchup with second-seeded South Carolina on Saturday. The fourth-seeded Seahawks (37-22) take on No. 3 seed Ohio State in an elimination game.

Litton hit a two-run homer in the first, added a run-scoring sacrifice fly in the fifth and added an RBI single in the seventh. East Carolina scored in every inning it batted except the sixth.

Kep Brown homered, and he and Ryan Jeffers each drove in three runs for UNC Wilmington.

Anthony Giachin had a run-scoring single to help the fourth-seeded Black Knights (37-22) earn just the fourth NCAA Tournament victory in program history. Army will play second-seeded Auburn (40-21) on Saturday night after the Wolfpack (40-17) face Northeastern (36-20) in an elimination game.

The Black Knights never trailed and built a 5-0 lead on Giachin’s RBI single in the seventh. That came after Army scored twice in the sixth, with Regine’s double scoring Giachin and Drake Titus following with a run-scoring sacrifice fly to make it 4-0.

Giovinco (9-5) allowed six singles and only one extra-base hit.

Evan Edwards had three hits and drove in N.C. State’s run with a sacrifice fly in the seventh.

CONWAY, S.C. (AP) — Kieton Rivers had a three-run homer and a two-run double as 2016 College World Series champion Coastal Carolina opened the NCAA Tournament with a 16-1 pounding of LIU-Brooklyn on Friday night.

Coastal Carolina led 2-0 when its offense took control with a five-run fourth, a five-run fifth and a four-run seventh. Rivers drove in two runs with a double in the fourth, then lifted his fifth homer of the season to drive in three runs.

GREENVILLE (AP) — South Carolina pushed ahead with five runs in the seventh inning to beat Ohio State 8-3 on Friday in the NCAA Tournament’s Greenville Regional.

The second-seeded Gamecocks (34-24) trailed 2-0 before the big inning, which included Danny Blair’s three-run homer. Justin Row followed with a two-run single in the six-hit inning that pushed South Carolina to a 5-2 lead.

The Gamecocks added three runs in the eighth and finished with 14 hits.

Dillon Dingler hit a solo homer and drove in two runs for the third-seeded Buckeyes (36-23), who had nine hits.

Brody Binder and Rigsby Mosley each drove in runs to help the third-seeded Trojans (42-19) earn a rain-delayed victory. Troy will face the Campbell-Georgia winner on Saturday night after Duke (40-16) faces the loser of the other opening-round game in an elimination matchup.

The game was delayed for 5 hours, 25 minutes due to lightning and rain that led officials to postpone the Campbell-Georgia game until Saturday.

ATHENS, Ga. (AP) — Georgia’s NCAA Tournament opener against Campbell was pushed back until Saturday due to severe weather.

The Troy-Duke game was delayed for 5 hours, 25 minutes due to lightning and rain, prompting officials to postpone the Campbell-Georgia game until noon Saturday. The loser of that game will play the Troy-Duke loser after that, while the winner will play that night.

GAINESVILLE, Fla. (AP) — Wil Dalton drove in six runs, and overall No. 1 seed Florida began its quest for a second straight national championship with a 13-5 victory against Columbia in the NCAA baseball tournament Friday.

The Gators (43-17) entered regional play having lost six of their last seven games, including two in a row at the Southeastern Conference Tournament by a combined score of 19-2.

Coach Kevin O’Sullivan’s team was in trouble again early against the Lions (20-29), but Jonathan India and Dalton hit consecutive two-run doubles in a six-run fourth inning to put the Gators ahead for good. Dalton, a sophomore playing in his first NCAA tournament game, also had an RBI double in the first, a run-scoring single in the third and a two-run home run in the eighth.

Jordan Butler (6-1) allowed two hits and a run in five innings of relief for the win.

Florida will play Jacksonville in the winners’ bracket Saturday. Columbia will face Florida Atlantic in an elimination game.