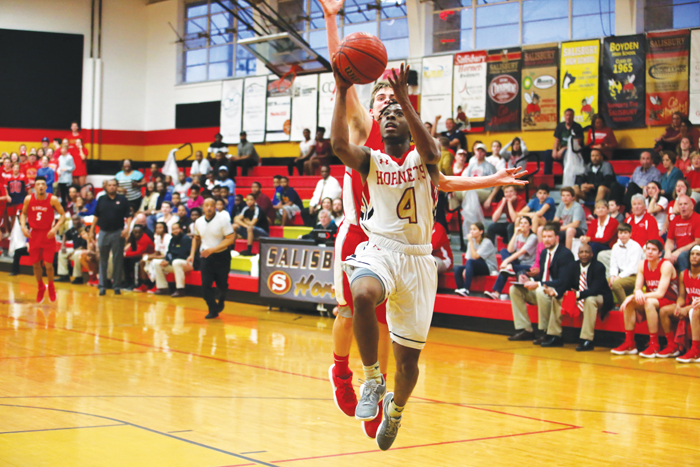 James Sipes file photo/For the Salisbury Post ... Salisbury’s Trell Baker goes in for layup during a playoff game against Hendersonville on Feb. 24. Baker has announced that he will continue his education and basketball career at Davidson County Community College.

THOMASVILLE  — That next-level decision is never easy to make, and it was even more complicated for Salisbury High’s Isacc Latrell Baker, who had options in multiple sports.

Baker, who answers to “Trell,” is a 5-foot-9 bundle of fast-twitch muscle. Quick, fast and strong for his size, he supplied a lot of the buzz for two excellent Salisbury teams as a senior. He raced for 12 big-play touchdowns for a 7-4 football team and averaged 14.8 points, 6.0 assists and 4.6 steals for a 27-4 basketball team that won the Central Carolina Conference championship and went all the way to the West Regional final.

He was one of the county’s five best performers in both sports, so impactful and respected that he recently was named the CCC’s Male Athlete of the Year.

Baker has decided to focus on basketball in the future. He signed with the Davidson County Community College Storm on Tuesday, a junior college program that should propel him to an opportunity at a four-year school in 2020.

“I really like playing both sports, but the best chance for me is basketball,” Baker said. “Basketball is the fastest way for me to get to where I want to go.”

DCCC head coach Matt Ridge is enjoying a banner recruiting year that is enhanced with the addition of Baker. DCCC competes at a national level, wins championships, has stable coaching (Ridge has been there 11 seasons) and can surround Baker with equally talented teammates.

“DCCC is close by,” Baker said. “It’s a very good program with good coaches, and I think I’ll fit right in. I’m excited.”

Baker was All-CCC and All-Rowan County three straight seasons, but he went from good to exceptional as a senior. He made strides in terms of leadership, unselfishness, defense and shot selection.

That improved shot selection led to him busting zone defenses and connecting on 39 percent of his 3-pointers. Because of his extreme quickness, every man-to-man defender had to play Baker as a driver, and when he started consistently drilling 3s, there was just no stopping him.

Baker scored 456 points as a senior while playing through injuries. That was the most points scored by a SHS player in a season since Darien Rankin poured in 477 in 2009. To put that 456 in perspective, Bobby Jackson, NBA Sixth Man of the Year in 2003, scored 458 as a SHS senior in 1992.

Baker still needed 420 points entering his senior season to reach 1,000 for his career. He surpassed that milestone in dramatic fashion, showering 3-pointers in a third-round home playoff game against Hendersonville. He produced a 15-point third quarter in that one, playing angry and with great intensity after a shaky first half.

In his final game, Baker scored 19, sparking the Hornets in an epic loss to Forest Hills in the West Regional final in Greensboro. Forest Hills edged the Hornets and went on to win the 2A state title. Forest Hills had a superb squad, but it still had few answers for containing Baker.

“I think basketball is where Trell’s heart is,” Salisbury head coach Bryan Withers said. “DCCC’s style of play fits him. They play at a tremendous pace, and that helps him. His speed and quickness are great assets, but it’s still going to be a challenge for him. College basketball is tough. Everyone at DCCC was the best player — or maybe the second best — on their high school team.”

DCCC was 22-7 last season, and that actually was a “down season” for the electrifying program. The Storm still was 15-1 on its home court at Brinkley Gym. For the season, the Storm scored 105.5 points per game, shooting better than 50 percent from the field and 38 percent from the 3-point line.

Baker’s skill set should blend in perfectly with what the Storm likes to do. He can score or dish with equal flair, and he can force a frantic pace on both ends of the floor.

“He’s really explosive,” Ridge said. “He is extremely quick, tough and is a really good on-the-ball defender.  He comes from a culture that is used to winning. Coach Withers did a great job of getting him ready to play at a very high level consistently. I’m excited about adding Trell to our basketball family. His best is ahead of him.”

Withers agrees with that assessment.

“I’m looking for a lot of good things from Trell at DCCC,” Withers said. “He just has to stay focused and keep getting better. He has the ability to do what he needs to do at DCCC, and I think he will do it.”