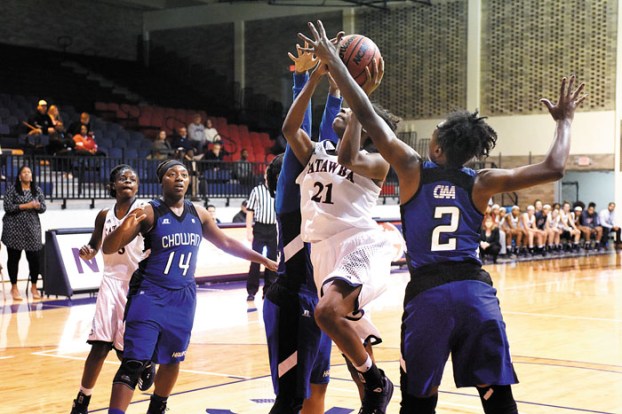 Wayne Hinshaw / for the Salisbury Post Catawba’s Terri Rogers drives to the basket past Chowan’s Danielle Weldon (14) and Jade Lee (2). On the left is Catawba’s Marshauna Butler (3).

SALISBURY — An exhausted, out of shape Terri Rogers is still one of the best players Catawba’s women’s basketball team has ever had.

The senior post player poured in an efficient, career-high 32 points, shooting 13-for-19, on Monday at Goodman Gym, as the weary Indians dug deep and handed the visiting Chowan Hawks their first loss of the season.

“Terri was dragging,” winning coach Angie Morton said with a smile. “If she hadn’t been dragging, maybe she scores 50.”

Chowan’s Chantel Roberts drilled three 3-pointers in the final 43 seconds, but she finally missed one with four seconds left from in front of the Chowan bench — Morgan Franklin defended it — and the Indians held on for a wild, 75-72 victory.

“Chowan was tough, athletic, physical — girls just jumping all over the place,” Rogers said. “But we all contributed a little bit.”

Sophomore guard Madi Hallman contributed a career game, with five 3-pointers and 19 points. Toni Tucker was solid off the bench and swished a pivotal 3-pointer that probably saved the Indians (2-3). Serena Brown’s only made shot was a big one, and she also had six assists. Marshauna Butler and Alexis Newbold struggled, but when the Indians needed clutch free throws they made them. Newbold hadn’t scored when Chowan (4-1) purposely put her on the line with 1:04 remaining, but she made the free throws for a 71-63 lead. Butler went to the line with five ticks left and calmly nailed two straight for the 75-72 cushion that forced Chowan to try for three on its final possession.

“They still had plenty of time on that last shot, and that girl shooting it was hot,” Rogers said. “That shot scared me.”

Rogers is just glad to be back on the court after a scary experience over the summer. Her car was rear-ended at a stoplight and resulted in a back injury that kept her off the court for about 10 weeks. That’s why she’s dragging right now and that’s why she needed extra breathers on Monday. Rogers didn’t play at all in Catawba’s first three games, but she debuted with 20 points in Saturday night’s loss in Maryland to Bowie State.

That trip to Maryland, a homecoming for Brown, Butler, Newbold and Brianna Hodges, was special for the players involved, but the Indians didn’t have any recovery time.

“We got back to Catawba at 5 a.m. on Sunday and practiced at 3 p.m.,” Morton said. “That had something to do with us not playing very well tonight in some stretches.”
The first five or six minutes of action set women’s basketball back about 50 years. Hasty shots clanged. Fans ducked errant passes. Catawba looked bad. Chowan looked worse. But late in the first quarter, both teams put the sloppiness behind them and started competing. It was a tremendous game from that point forward.

Chowan is a powerful offensive-rebounding team, grabbing on average, 17 more boards than its opponents, and that glass prowess kept Chowan even most of the first half despite awful shooting. Catawba needed a 3-pointer from Hallman for a 35-32 halftime lead.

Chowan appeared to be taking control, erasing Catawba’s slim lead and taking its biggest lead of the night at 41-37 after Jada Lee drained a 3-pointer as she was bumped by Butler.

But that’s when Tucker hit her 3-pointer.

“Toni had a chance to jack up a 3 early in that possession, but that’s we’ve been talking about, not shooting too quick,” Morton said. “She made a pass, we reversed the ball, and it came back to her (Franklin made the pass). And Toni made the open shot.”

Hallman was on and swished another 3-pointer at the third-quarter horn for a 50-47 lead.

“My teammates had confidence in me, and they were finding me a lot,” said Hallman, who steered East Davidson into the 2A state title game two years ago. “I was able to knock some down.”

When Hallman opened the fourth quarter with yet another 3-pointer, Chowan had to abandon thoughts of playing zone. When teams have to play Catawba man-to-man, that’s when Rogers punches the clock and goes to work. She’s right-handed, but an injury to her right wrist a couple of years ago forced her to develop her left hand, and now she’s proficient with it. When she caught the ball on the left block against one defender, it was almost an automatic two — or three — for the Indians.

Up 71-63 after Newbold’s free throws at the 1:04 mark, it appeared Catawba might comfortably cruise to the winner’s circle, but Roberts made a 3-pointer with 43 seconds left to slice Catawba’s lead to five. After Hallman split two free throws, Roberts, who scored 29, nailed another 3, and the Indians’ lead was down to 72-69.

Hallman did a good job of controlling the ball for the Indians, but she again went 1-for-2 at the line with 15 seconds left. Seven seconds later, Roberts struck again, and Catawba was clinging to a 73-72 lead. That’s when Butler came through with her big free throws — and Roberts finally missed.

Catawba gave up 22 offensive rebounds to the bouncy Hawks, but not many were stickbacks. Catawba shot better (46 to 36 percent) and used its big depth advantage well. Chowan played seven, while the Indians got minutes from 12 players.

“A lot of big shots by Madi and a lot of energy from Toni Tucker tonight,” Rogers said. “It just feels great to be back out there with my teammates.”

The Indians will get to rest a bit. Catawba will play next at UNC Wilmington on Nov.24.

By Joedy McCreary AP Sports Writer WINSTON-SALEM (AP) — The lead was about to slip away from Wake Forest when... read more