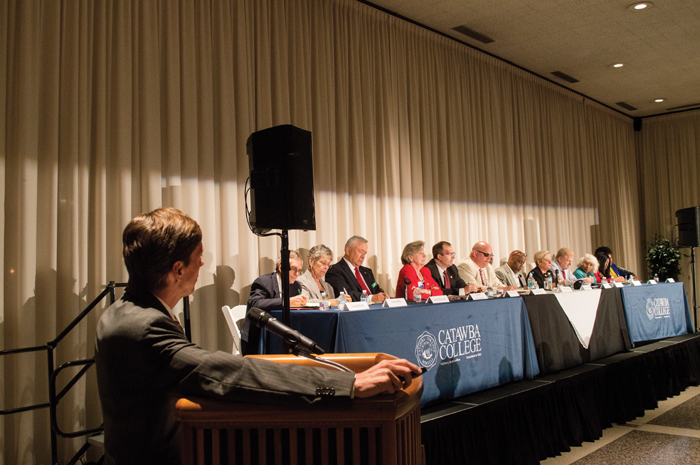 SALISBURY — With early voting underway and multiple candidate forums under their belts, Salisbury City Council candidates have had time to finely hone their campaign pitches.

But two of the four questions asked at a Monday night candidates forum — hosted by the Rowan County Chamber of Commerce in the Catawba College Crystal Lounge — were ones that haven’t been posed to candidates in a public setting before.

All of the questions asked by forum moderator David Whisenant of WBTV were submitted to the Salisbury Post prior to the forum.

AT&T, Catawba College, The Salisbury Post, WSAT and the chamber were sponsors of the forum.

Whisenant said he would ask the questions in the exact way they were written.

One reader asked, “Do you think a tax increase is necessary to balance the city budget?”

Brian Miller said the question isn’t about whether taxes would help balance the budget, because the budget is balanced every year.

“By state law, we have to have a balanced budget. We don’t have the luxury like our federal government colleagues do in running a deficit budget,” Miller said.

He said that earlier this year, the council voted to raise taxes so that the city could give police officers a raise.

“Those are the fun things you get to do when you’re an elected official. You have to make hard decisions,” Miller said.

Latasha Wilks said she doesn’t think it would be fair for the city to raise taxes because of problems caused by past City Council members.

“A prime example, I’m just going to put it out there: Fibrant. … Why should citizens have to have a tax increase?” Wilks asked.

Todd Paris said that if Fibrant’s problems can be solved, taxes could actually be cut and services could be expanded.

“As (David) Post has said before, the Fibrant thing drives the city, drives everything. We have some people who work for the city … that haven’t received anything like a real salary raise in many, many years because the Fibrant deficit is eating our entire budget alive,” Paris said.

“Our tax rate’s about 70 cents. Fibrant costs about 12 (cents). We have the highest tax rate of any community near us. Take that 12 cents away and guess what: We’re among the lowest tax rates of any of the communities near us,” Post said.

Tamara Sheffield said Fibrant has “obviously” been a drain on the budget. She then asked members of the audience, “Do you have Fibrant?”

Several people shouted out that they do.

“Good. Thank you. Tell someone else to get it. It helps us all,” Sheffield said.

Patricia Jones “P.J.” Ricks said no one wants to hear that taxes might be increased.

“It might be necessary, but I think the first thing we need to do is actually look long and hard at the budget. We need to look at Fibrant; if we’re losing $3 million in Fibrant, why do we need a tax increase? If we can figure out a way to make Fibrant work and work efficiently, bring in money, that will help make sure that we don’t have a tax increase,” Ricks said.

Karen Alexander said the city budget has been carefully looked at, but that it is “very detailed and very difficult to decide.”

“There are also other ways to deal with our budget without tax increases,” Alexander said. “As far as the work of Fibrant, (we’ve) almost paid for it. … It is not like nobody’s working on it. We are.”

“It’s not a question of whether we think it’s necessary or not. It’s the law. The budget has to be balanced. If we don’t have enough revenue, then we have to raise taxes. Pure and simple,” Struzick said.

Candidates were also asked whether candidates thought that citizens should be able to directly elect a mayor.

Rodney Queen, who sat near the middle of the group, said he was “climbing out of the chair” with excitement to answer the question.

“Ten years ago, I went before the City Council and said, ‘We need to have seven people on the council. We should stagger the terms. We should elect the mayor,’” Queen said.

He then addressed the answer that Alexander gave in response to the question.

Alexander said the current system — in which the mayor is chosen by fellow council members after the election — was put in place so that people wouldn’t run solely for the position of mayor and then, if not elected, be unable to serve on the council.

“Going against what our current mayor (Alexander) said, we don’t have to lose (people). If we’ve got three people running for mayor, we can vote so that the other two who don’t get mayor still count their votes toward serving on the City Council,” Queen said.

Kenny Hardin said he believes voters should be able to vote directly for mayor.

“And if I’m fortunate enough to be on the council, that’s something that I will actually push for,” Hardin said.

During the course of his campaign, Hardin has said that he is running for mayor, though voters don’t elect the mayor.

Many of the candidates, including Hardin, also said they would support having ward or district voting, which would allow specific areas of the city to elect representatives to the council.

Ryan Evans said he agrees with the way the mayor is currently elected but he would want City Council terms to be four years rather than two.

“I also believe that, as far as the districts and the wards, there should be a two-year representative from it and they have a two-year term,” Evans said.

Leda Belk said she wants voters to be able to elect their mayor. But she agreed that terms are too short.

“Government moves slowly, and if you come on to City Council and you’ve got a project that you start, you want to be there to see it through. And that doesn’t often happen within a two-year frame,” Belk said.

Al Heggins said she believes there should be a mayoral race.

“Let your most qualified people who think that they’re the most qualified run for mayor and let the system decide who the mayor should be,” Heggins said.

The candidates forum was held from 6 to 8 p.m. About 150 people attended.

The next candidates forum will be from 5:30 to 7 p.m. Nov. 2 at Mission House Church, 120 Statesville Blvd. It will be geared toward college-age voters.