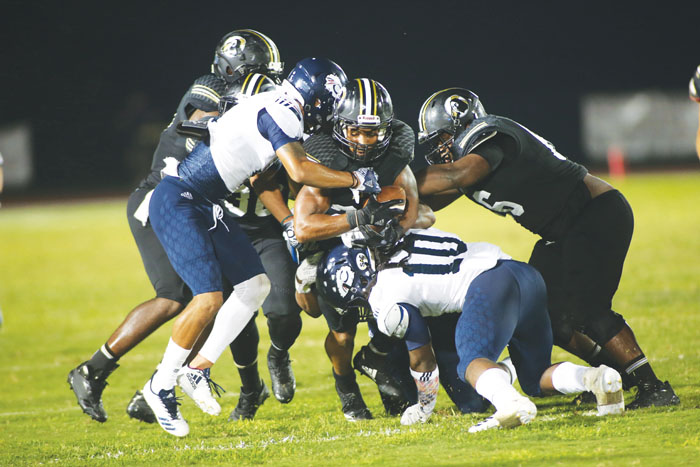 “We had some unselfish performances today by two of our stars,” Catawba coach Curtis Walker said. “Pembroke focused a lot of their attention on blocking (linebacker) Kyle Kitchens on pass plays and they did some crazy things to contain (receiver) Sam Mobley, but that just opened things up for our other guys.”

O’Brien transferred to Catawba after being the starting QB at UNC Pembroke the last two seasons. He was sharp in what had to be an emotional outing. He was 18-for-26 for 180 yards. He threw one interception.

“We knew they would try to take Mobley away, so our game plan was to attack their linebackers and to attack the middle of the field with Osinskie and our backs,” Walker said.

While the game was much hyped and was the Division II game of the week for Hero Sports, it turned out to be  a mismatch. UNC Pembroke entered the game as the Division II leader in turnover margin, but Catawba won the turnover battle, 4-2. Linebacker Isiah Huffin recovered a fumble. Page, a sophomore cornerback, had two picks, and DB Trey Murray had one.

There was really only one dangerous time for Catawba. After jumping to a quick 10-0 lead on a Brackman field goal and an O’Brien-to-Gavin Rose TD, the Indians encountered a rough stretch where they were hurting themselves. They had a gaffe on a punt return that resulted in a turnover, and UNC cashed in for a TD. Then Catawba had a holding penalty on the ensuing kickoff, got backed up, and O’Brien threw his pick. Catawba’s defense had to make a stand just to force a successful field goal try and preserve a precarious 10-9 lead.

“There were some learning lessons there,” Walker said. “We learned we’ve got to communicate better on punts, we’ve got to tackle better and we’ve got to gang-tackle. And I think Patrick  started the game a little tight, missed a signal and missed a read. (Passing game coordinator and quarterbacks coach) Kevin Brown did a good job of settling him down, and he started making plays.”

UNC Pembroke’s momentum lasted until that field goal went through the uprights, but it was all Catawba after that. In a devastating second quarter, Catawba’s defense was a stone wall and O’Brien fired scoring passes to back Kenyatta Greene and Osinskie.

The TD to Greene was deceptive. Usually, he’s the key blocker on a screen play, and Catawba ran what looked like a screen. But instead of blocking, Greene leaked out into space and was wide open.

Page’s 64-yard interception return with 6:18 left in the third quarter made it 31-9 and ended UNCP’s realistic comeback hopes.

“We were playing defense against the run very well, and we put them in positions where they had to throw the ball,” Walker said.”When you do that, a talented player like Page can make a play. That interception put us firmly in control.”

It was a fine game for Catawba in every phase, and Walker didn’t want the offensive line to get overlooked.

“I commend those guys because we were able to run the ball effectively,” Walker said. “When you’re running it for 5 yards on first down, your offense has a lot of good options.”

Catawba is home against Mars Hill next Saturday night. The Lions won against Lenoir-Rhyne yesterday.