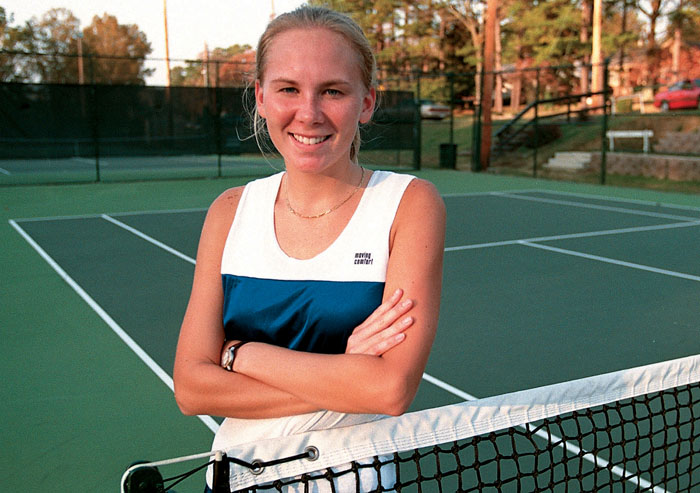 SALISBURY POST FILE PHOTO ... Julianne Treme, shown in a photo from here Salisbury High School days in 1996. In August, she will be inducted into the Salisbury-Rowan Sports Hall of Fame.

SALISBURY — When she was a 13-year-old freshman in 1993, Salisbury High’s Julianne Treme won a state tennis championship.

She may be the only athlete ever to accomplish such a monumental feat at such a young age. She celebrated her 14th birthday the next day, and she would go on to defend her 1A/2A singles state title in 1994, 1995 and 1996. Only a handful of people in N.C. history won four tennis championships.

Treme will be part of the 17th Salisbury-Rowan Hall of Fame class.

While this is the 17th class and will raise the Hall membership total to 109, Treme’s accomplishments make it obvious that Rowan County will never run out of more-than-deserving Hall of Famers.

The Hall of Fame was started in 2001, and has been trying to catch up with decades of rich history ever since. That’s an impossible task, but the effort continues.

Like Treme, Donte Minter and Andre Steele are names associated with state championships.

Treme was 114-6 in her high school career and was conference player of the year four straight times. She led Salisbury to three straight 1A/2A dual team state championships in 1994, 1995 and 1996.

In college, Treme was a four-year starter  at Elon. In her college career, she was 36-11 in singles and 19-8 in doubles, while winning numerous academic accolades.

Minter, born on New Year’s Day in 1984, is 33 and will become the youngest member of the Salisbury-Rowan Hall of Fame.

Minter starred in basketball at West Rowan High. He scored 2,087 points in four varsity seasons, and ranks second on the all-time scoring list for Rowan County males. Leading that list with 2,469 points is 2016 Salisbury-Rowan Hall of Fame inductee Scooter Sherrill, who was Minter’s West teammate for two seasons.

The Falcons were 59-1 in conference play during Minter’s high school career.

The 6-foot-8 Minter played at Fork Union Military Academy, the University of Virginia and Appalachian State University. In 2007-08, he was All-Southern Conference for Appalachian State, averaging 15.4 points in league play and shooting 60 percent from the field.

Steele, a 1991 Salisbury High graduate, was one of the finest sprinters in county history and was named to USA Today’s All-USA team in 1991. He competed on the U.S. Junior Pan-American team in the summer of 1991.

Sadie Hawkins Rice is regarded by many as the best of J.C. Price’s many great female basketball players. She starred in the late 1950s and early 1960s for the Red Devils.

She also was an outstanding tennis player.

Paralyzed by an accident in 1973, Shoaf went to work for the Salisbury branch of the YMCA five years later.

Shoaf provided 38 years of service at the YMCA, retiring in May and was honored by a party on June 4. He was known for often going above and beyond the call. He’s been a positive influence on thousands of youth over the years.

Doug Rice, a West Rowan (Class of  1973) and Appalachian State graduate, got his start on Salisbury radio as a program director and has become a household name for auto racing fans through his work with the Performance Racing Network.

He’s been with PRN since 1988, rising from affiliates manager to president and general manager. He’s been an anchor on PRN race broadcasts since 1994, and his “Fast Talk” call-in show airs on more than 175 radio stations.

Rice was the first broadcaster to tackle the challenge of covering both the Indy 500 and the Coca-Cola 600 on Memorial Day, 2015, and he has served as the P.A. voice of Appalachian State football.

A complete list of Salisbury-Rowan Hall of Famers and their year of induction is in Scoreboard.