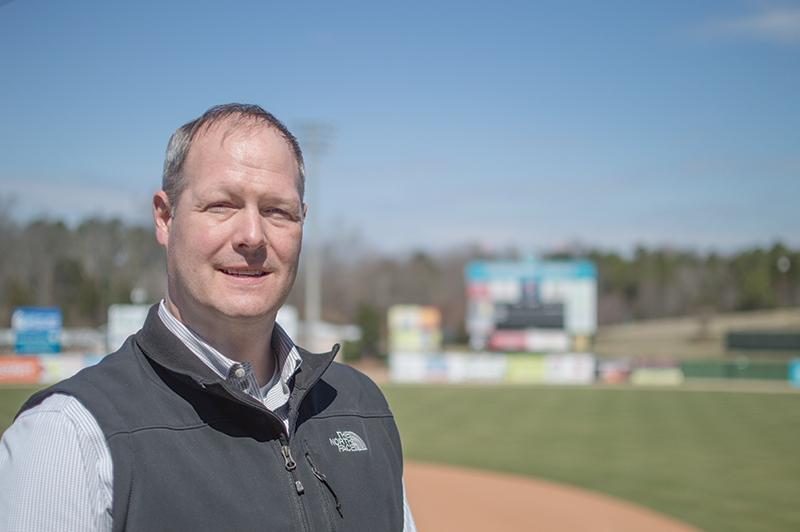 Josh Bergeron / Salisbury Post - Randy Long is chief operating officer of the Kannapolis Intimidators. He started working for the franchise shortly after it came to Kannapolis.

The Intimidators, who have played at a stadium near Interstate 85 since 1995, are likely in their last years at the facility. Kannapolis city officials plan to build a $37 million stadium in downtown, which will also be the site of major streetscape renovations and a demonstration project that will include apartments, retail stores, a parking deck and possibly a hotel. If all goes according to plan, the new stadium would open in time for the 2020 baseball season.

As the team prepared for the 2017 season, Long spoke with the Salisbury Post about his history with the team, the history of the existing stadium and a proposed downtown stadium.

“I think the biggest thing, what we’ve said, is that it’s not about a baseball stadium,” Long said. “It’s about a downtown revitalization. The baseball stadium would just be a piece of what drives people down there.”

“At the time, in low-A minor league baseball, I didn’t expect to come here and see a stadium as nice as this was, you know kind of tucked away in the middle of the woods,” Long said. “At the time, in 1997, this league didn’t have as many teams and with the stadium being three years old it was on the upper end. … It was really nice, comparatively, at the time.”

There have been some small upgrades to the stadium since its initial construction, he said. Although it’s dated now, the scoreboard has been upgraded during the life of the stadium, Long said. The first scoreboard required people to change individual lightbulbs when one went out. Other upgrades include: adding picnic shelters, expanding the stadium concourse with additional concrete, adding concession carts and electronic upgrades.

Being in a secluded spot is nice, but it also comes with challenges, Long said. For example, cable TV lines don’t extend to the stadium.

“It’s quaint and private to be here, but it’s definitely a challenge sometimes to get people to come here, to know all that we have going on out here,” he said. “That’s just based off of our location. We’re right off of the interstate, which is good, but you would have to know you were coming here to come to the events.”

The layout of Intimidators Stadium can also be troublesome at times. Seats in portions of the ballpark can get extremely hot because of the sun, Long said.

Citing the Charlotte Knights and Winston-Salem Dash, Long said teams who have moved to a downtown were better off afterward.

“Successful as a baseball team, but also as a downtown,” he said.

At the same time, he said the Kannapolis Intimidators didn’t approach the city with a request for major upgrades that led to talks about a downtown stadium. The Intimidators also didn’t explicitly ask for a new stadium, he said.

“A lot of the talks just really progressed naturally as the city acquired (downtown) land,” he said. “They do want to revitalize it and they do happen to have a minor league baseball team. Those steps have just sort of gone that way.”

Long said minor league stadiums operate much differently than when the Intimidators’ facility opened in 1995. There’s a great emphasis on the experience of fans.

An approved design for the new, downtown Kannapolis stadium includes a number of features not present in the existing facility, including: grassy berms to be used for casual seating, restaurants overlooking the outfield, an outdoor bar, a party deck and rocking-chair seating.

The proposed stadium also includes a concourse that allows fans to walk entirely around the ballpark, something that’s not available at the existing Intimidators facility.

“I think it all comes back to what do we want to have in our community, what fits us,” Long said.

Plans for the new stadium show a capacity of 5,800. However, much of that capacity wouldn’t be from traditional seating. It would be from “neighborhoods” — areas like the rocking-chair seating or party deck. By comparison, the existing stadium can hold 4,700 people.

Once built, Long said he hopes the stadium and the Kannapolis Intimidators can be a point of pride for local residents.

“When people come into town, you want them to come into town and say ‘Hey, I’m gonna show off this thing in our community,’” Long said.