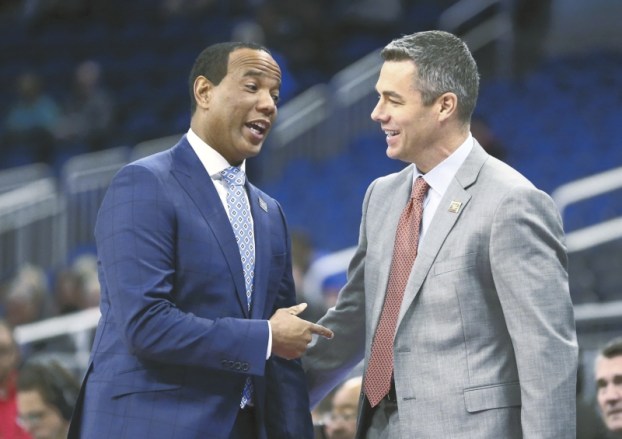 The school has hired UNC Wilmington’s Kevin Keatts to take over as head basketball coach, staying in its home state to find a coach who had spent time as an assistant to a Hall of Fame coach before leading his own NCAA Tournament team.

The school announced Keatts’ hiring in a news release Friday night, one day after his Seahawks lost to Virginia in the first round of the NCAA Tournament.

In a statement, Keatts said he has “incredible respect” for the program’s tradition and said there’s an “unbelievable commitment to basketball in Raleigh.”

“From incredible fan support to high-level academics, first-class facilities and the ability to recruit at the highest level, everything is in place at N.C. State to build an elite program,” Keatts said. “My family and I are honored to become a part of Wolfpack Nation, and I look forward to adding to its storied history.”

The 44-year-old Keatts replaces Mark Gottfried, who was fired after his sixth season that saw the Wolfpack quickly unravel after four straight NCAA Tournament trips.

“When we set out to hire our next men’s basketball coach, we wanted to identify someone with the pedigree, vision and plan to serve as the architect of N.C. State basketball,” athletic director Debbie Yow said in a statement. “Kevin quickly emerged as the perfect fit in each of these areas.”

Keatts is a former assistant to Rick Pitino at Louisville and two-time Colonial Athletic Association coach of the year who led UNC Wilmington to a 72-28 record and two NCAA Tournaments in three seasons there.

Keatts, a former coach at Hargrave Military Academy in Virginia, was on Louisville’s staff from 2011-14 — the Cardinals won the 2013 NCAA championship — before earning his first college head coaching job at UNC Wilmington. He turned around the UNCW program after it slipped near the bottom of the CAA, implementing an up-tempo offense and a version of the full-court press run by Pitino’s Cardinals.

The Seahawks were 9-23 the year before Keatts’ arrival, but went 18-14 in his first season in 2014-15 and were invited to the CollegeInsider.com Tournament. The Seahawks earned the CAA’s automatic NCAA Tournament bid in each of the past two seasons, losing by eight points to Duke in the first round in 2016 and falling to the Cavaliers by five points Thursday.

UNC Wilmington this season ranked 12th in scoring, averaging 84.8 points, was 10th with 336 3-pointers made, and was sixth in turnover margin at plus-4.1.

Keatts inherits a program that Gottfried stabilized for a time after the Wolfpack missed the NCAAs in 15 of 21 years since the Jim Valvano era. Gottfried’s first four teams all made the NCAAs, which included two Sweet 16 runs, but things abruptly fell apart amid roster upheaval — transfers and players leaving early to pursue professional careers — that damaged continuity.

Smith hasn’t announced his plans for next season.

Big man Omer Yurtseven has already said he will enter the NBA draft but won’t hire an agent, keeping open the option to return to N.C. State for his sophomore season.