Update: Man seriously injured in head-on collision with a tree has died 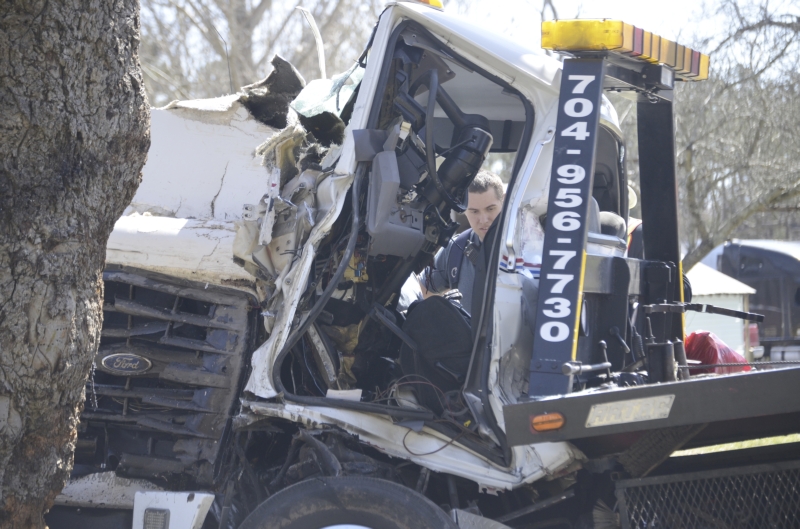 A firefighter can be seen looking at the remnants of a rollback where driver Terry Childers was pinned inside. He ran off the road and overcorrected, struck a ditch and hit this pecan tree head-on. Rescuers had to use several tools to pry the cab away from the tree and the what was left of the back seat. Shavonne Walker/Salisbury Post

ROCKWELL — A Kannapolis man who was seriously injured Thursday morning after a single-vehicle collision left him pinned against a large pecan tree on Old Beatty Ford Road has since died. No other information was readily available.

According to State Highway Patrol Trooper C.F. Rogers, Terry Childers, 69, was driving a rollback wrecker for Road Runner Towing of Kannapolis. He was traveling east on Old Beatty Ford Road at 11:31 a.m. when he ran off the road to the right.

Rogers said the man struck a mailbox, overcorrected, crossed the center line and traveled onto the left side of the roadway. He then hit a ditch and a large tree. The cab of the vehicle was flattened as it was wedged against the tree in a yard at 10004 Old Beatty Ford Road.

A witness behind the rollback provided information that led troopers to believe speed was a factor. The speed limit in that area is 55 mph.

Betsy Shore said she was headed home on Lower Stone Church Road when she came upon the crash. She called 911 and gave the dispatcher the nearest address she could find.

“She asked me if he was alive. I said he’s pinned,” Shore said.

Shore said the driver was saying “get me out” as she walked up to the wreckage.

Ann and C.W. Miller were in their front yard when they heard a loud bang. When the couple walked toward the road, they were startled at what they saw.

“I could see he was breathing. He was hollering, ‘Let me go,'” C.W. Miller said.

Crashes like this one have happened many times in the area, the couple said. Ann Miller said the cause is often speed on the part of some drivers and the fact that there is no shoulder on the road and deep ditches.

The couple said it was obvious that Childers was in considerable pain. They watched as rescuers worked to free Childers from the wreck. Ann and her husband, C.W. Miller, describe the crash they heard not far from their front yard. The driver of the rollback, Terry Childers, was pinned inside the vehicle after he struck a tree. The couple describe his cries for help. Shavonne Walker/Salisbury Post

It took a team of four to five departments to get Childers out of the cab of his vehicle, said Rowan County Rescue Squad Chief Eddie Cress.

Cress said rescuers had to change their strategy when they realized that the cab was pushed so far into the back seat of the vehicle that they would have to pry the dashboard apart from the mangled vehicle.

He said they used various tools including the Jaws of Life, a spreader and other hydraulic equipment, which was used to lift the vehicle away from the tree. The vehicle was moved sideways from the tree. Rescuers used tools to cut up parts of the cab, including the dashboard, to move it so they could had better access to Childers.

Cress said it was a team effort. He said the wreck was one of the worst crashes he’s seen in Rowan County in some time.

Childers was taken by Rowan County Rescue Squad to a nearby landing zone, where a helicopter would fly him to Wake Forest Baptist Medical Center in Winston-Salem.