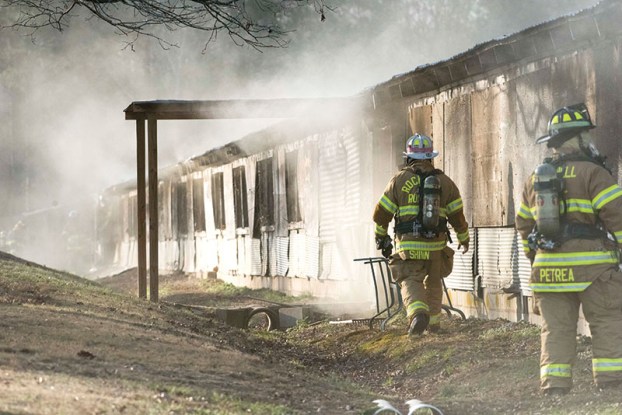 JON C. LAKEY / SALISBURY POST Firefighters from several Eastern rowan county Fire departments responded to a fire at the Riverside Gun Club on Thursday afternoon. The former chicken house that was converted to an indoor shooting range was damaged after a small control burn of yard waste inadvertently ignited the end of the building. Thursday, December 22, 2016, in Rowan County, N.C.

RICHFIELD — Firefighters responded fairly quickly to the Riverside Gun Club on Thursday and were able to save much of the metal structure after a leaf brush fire got out of control and set the building on fire.

Pooletown Fire Chief Ryan Barkley arrived first on the scene to fire in the structure. He was immediately met by someone at the club who explained he’d been burning a pile of leaves in a trench on the side of the building when the wind picked up. The burned leaves caught the side of the wall on fire and spread into the rafters, Barkley said.

Once firefighters were able to extinguish the fire, they began using fans to blow smoke out of the building.

Firefighters remained on the scene to ensure there was no more fire along the roof area and the smoke was blown out using the fans.

SALISBURY — The Salisbury Community Foundation recently distributed grants totaling $208,500 to local nonprofits. The grants were made possible in... read more