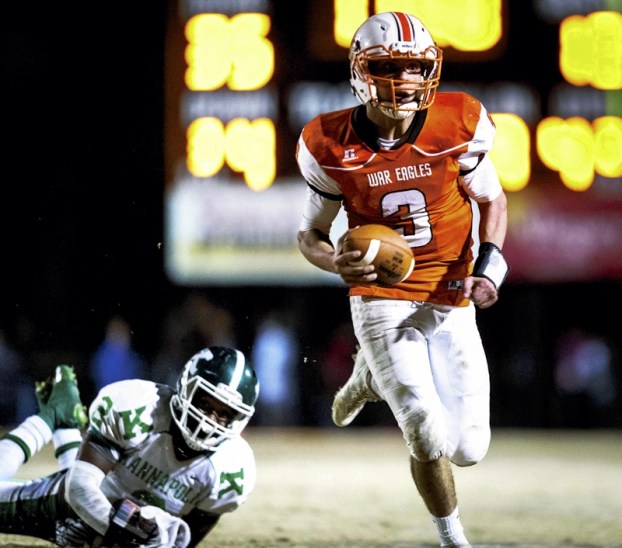 Davie County moves on with convincing win over A.L. Brown Kannapolis linebacker Steven Howie (2) begins congratulating his teammate Elijah Hall as he carries the ball to the end zone in the second round of playoffs against Davie on Friday night, Nov. 25, 2016 at Davie County High School in Mocksville, N.C. The War Eagles won the game, 38-19.
(Winston-Salem Journal/Allison Lee Isley)

MOCKSVILLE — Davie displayed razor-sharp execution in a decisive first half, and quarterback Chris Reynolds, receiver Cooper Wall, linebacker James Boyle and kicker Jared Griggs set numerous school records as the War Eagles thumped visiting Kannapolis A.L. Brown, 38-19, last night in the second round of the 4A playoffs.
A 10th straight win lifted Davie, the top seed in the 4A West, to 12-1 and to the quarterfinals for the first time since 2010. The No. 5 Wonders finished 9-4.
Facing an opponent that had not allowed more than 29 points all year, the War Eagles did as they pleased in the first half, jumping to a 25-0 lead in the first 16 minutes and leading 32-13 at the half.

Reynolds did his thing again, going 17 of 27 for 246 passing yards and two touchdowns and rushing for a team-high 63 yards.
Kannapolis fumbled a QB-running back exchange on the game’s third snap, Davie defensive tackle Spencer Wilson recovered at the Wonders’ 20, and Davie went up top on first down as Reynolds and Cooper Wall connected for a 20-yard touchdown. From the muddle-huddle formation, Reynolds completed a two-point pass to Griggs for an 8-0 lead less than a minute into the game.

“It was a post,” Wall said of the quick TD. “They were playing press coverage, I got him on the inside and Chris put it right on the money.”

On Davie’s second possession, Peyton Hampton scored the first of his two TDs from the 2. When Griggs made a 32-yard field goal on the first play of the second quarter, it was 18-0. Davie’s next series resulted in another TD as Reynolds and Wall hooked up for 28 yards.

It was 25-0 with 7:58 left in the half, at which point the Wonders had 17 yards on 15 plays, no first downs and a turnover and four punts on five possessions.

Kannapolis got on the board on a broken play. Quarterback Zac Williamson wasn’t ready for a snap that hit him in the face mask. Davie defenders stood around, thinking A.L. Brown had committed a false-start penalty. Williamson alertly gained control of the ball and swept around the left end for 51 yards.

“When the snap happened like that, we were thinking false start (on Kannapolis),” Devericks said. “But if the whistle’s not blown, we’ve got to play in that chaos.”

The Wonders forced a punt and then went to the air. Williamson, who  had misfired on all three pass attempts before this series, went 3 for 3 for 77 yards on a four-play, 77-yard drive that cut Davie’s lead to 25-13 with 3:08 remaining in the second quarter. Broc Barnette blocked the point-after kick.

Davie didn’t flinch, driving 69 yards in five plays to make it 32-13 at the half. Reynolds’ 13- and 15-yard completions to Roberts and Beau Byerly set up Hampton’s 12-yard TD run.

“(Reynolds) did a good job of figuring out what they were in and seeing what they were giving,” Devericks said. “That allowed him to trust everyone to make the plays.”

Davie came out conservative in the second half, but still effective as 10 straight running plays from Hampton and Reynolds led to Griggs’ 38-yard field goal.

Kannapolis responded with a 12-play drive, but it turned the ball over on downs at the Davie 12, and the Wonders were pretty much belly-up at that point.

Davie added some polish on a 15-play drive that bridged the third and fourth quarters. On third-and-16 from the Davie 7, Reynolds hit Roberts (six catches for 124 yards) on a post route for 40 yards. Eight plays later, running back Adrian Cranfill made a one-handed catch on the sideline to move the ball to the Kannapolis 8, and Griggs would eventually hit a 27-yard field goal.

The final scoring play was a defensive TD for the Wonders. Elijah Hall scooped a fumble and ran 19 yards to the end zone with 5:33 to play. That was sandwiched by interceptions from Davie’s Angel Perez-Hunt and Hite Merrifield.

Davie set all kinds of records. Wall came in tied with Ben Ellis with 147 career catches and ended the night at 151 as he sat out the second half with an injury that isn’t considered serious. Boyle, who had already broken the single-season tackles record at 182, broke the mark for career tackles with his first stop of the night. He and Jared Barber were tied at 473.

Griggs went 3 for 3 on field goals to make him 15 of 17 for the year. The old record was 13 by David Wooldridge, who happens to be Griggs’ kicking coach, in 1999. And finally, there’s Reynolds, who threw two TD passes to tie Garrett Benge for the most in a career with 57. This was Reynolds’ 14th 200-yard passing game, tying a record with Benge. This was Reynolds’ record-setting 18th game with multiple TD passes; Benge is second at 17.

“They’re program guys,” Devericks said of the record-setting performers. “They work as hard as they can and they raise the level of play of everyone around them. Griggs was sort of overlooked (coming into the season), and he’s worked his tail off.”

Merrifield got his team-high sixth interception, and Perez-Hunt got his fourth as Davie now has 19 picks on the year.

By David Shaw sports@salisburypost.com MOCKSVILLE —The end of the argument — if there really ever was one — came swiftly... read more