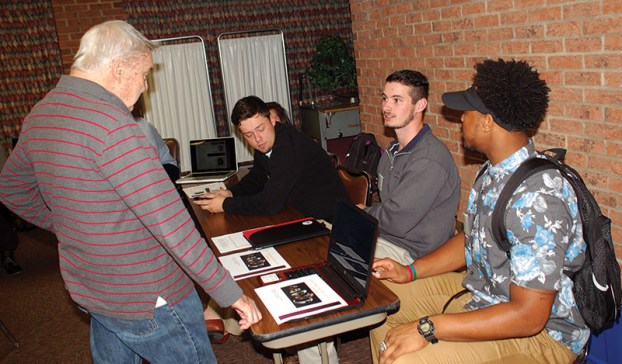 Ralph Shuping, left, hears about the newest generation of smart watches from Apple. Offering the information are Catawba College students Rusty Brown, middle, and Demetrius Blackwell, far right. Jordan Taylor, in the blackground, was talking to people at the Computer Information Technology Day about Fitbits.

SALISBURY — Catawba College students, out to earn extra credit, manned several tables at Rufty-Holmes Senior Center Thursday morning offering information on some of the newer digital products on the market.

The theory was that some of the seniors stopping by, on this second annual Computer Technology Information Day, might be looking for Christmas gifts for grandchildren or wanting to learn more about items such as Fitbits, game applications and smart watches.

Rusty Brown said several of the older adults stopping at his table found the technology interesting, but they also enjoyed the conversation — and Brown wasn’t complaining.

The Computer Information Technology Day was offered by the Rufty-Holmes Senior Center’s Computer Club, which meets every Thursday morning at the center.

Loyd Hill, a longtime club member, remembers the earliest days, many years ago, when the participants knew little about computers.

“We finally got to the point we wanted to get on the internet,” Hill said.

Fast forward to today, and Hill has self-published five books relying on his computer and a strong online presence. He started with family histories in his first two books, and he uses a personal blog to promote his work.

At the Computer Day, Hill was giving people information on blogs and how to use them, for example, to express opinions, keep a personal diary or promote a product or service.

Eleanor Qadirah and Pat Nelson have been members of the club since the beginning, when there weren’t even computers in the meeting room. Qadirah said the club members eventually received “hand-me-downs” from the city of Salisbury.

The information age took root quickly among club members. “We’ve been here for years, and we’ve enjoyed it,” Nelson said.

The club brings in speakers and shares knowledge about all kinds of devices, from smart phones to notepads. Club member Carolyn Blackman has been using her iPad for about five years, taking and storing photographs of her linen collection and using it to help with her embroidery.

She points out the program she uses for word processing and spread sheets and the application she has added for security.

Brown, who is majoring in business with a concentration in management information systems, said the second-generation Apple smart watches he was talking about with people Thursday are quite better than the inaugural version and have GPS capability.

Watches such as these are a “convenience necessity,” Brown said, and they are something he would find useful while riding his motorcycle, when it’s easier to check a wrist than pull out a cellphone.

“I’m actually looking to get one for Christmas,” Brown said.

Catawba students Jenny Lux and Jordan Taylor were sharing information with visitors about Fitbits, strap on wristband devices that can measure things such as steps, heart rates and sleep patterns.

Lux, an accounting major, said Fitbits come in all kinds of styles, with prices ranging from $60 to $250. They also seem to be pretty durable, she said.

Students Amber Cruse and Eric Corley were showing seniors the newest things in smart phone cases, games, photography and gift cards they could buy for children and grandchildren to help with their technology purchases.

Blake Misenheimer and Oscar Castillo, also students, were promoting the use — for older and younger adults — of the Tile application, which uses Bluetooth technology in helping locate lost wallets or keys.

The company bills Tile as the easiest way to find your things.

Ralph Shuping, a member of the computer club, said he probably would not purchase the Tile app.

He demonstrated how when he’s trying to find his wife in the grocery store, he takes out his flip phone and dials up his wife, who tells him what aisle she is in.

Misenheimer emphasized that young people his age misplace things such as wallets and keys plenty of times, and they might find the app useful, especially for under $30.

Plenty of other information vendors provided assistance at the two-hour Computer Technology Information Day, including representatives from Simple Solutions of N.C., the city of Salisbury and club members themselves.

Annual membership in the Rufty-Holmes Computer Club is $24.