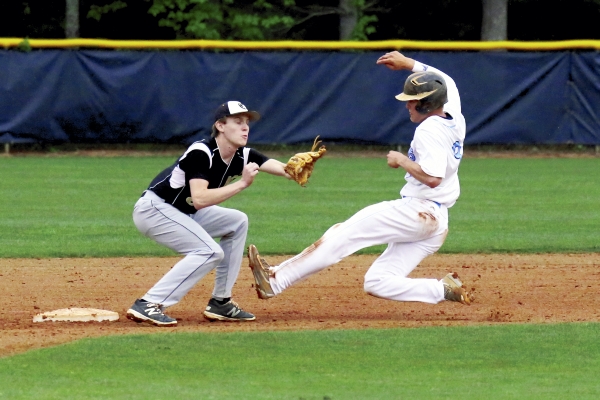 James Sipes FILE PHOTO/for the Salisbury Post ... West Rowan’s Lee Poteat goes in hard at second base during a game on April 22 at home against Concord. The Falcons won the game, 6-0. Poteat has announced that he plans to continue his education and baseball career at St. Andrews University.

MOUNT ULLA — Coaches speak often about guys who will gladly run through walls for the good of the team, but that’s mostly just talk.
But not at West Rowan, where Seth Graham coached a right fielder — Lee Poteat — who took on walls at least twice during the 2016 season.
The final score was Walls 2, Poteat 0 — but Poteat, who signed recently with St. Andrews, did earn the respect of the world for both of those bone-jarring collisions. Poteat never slowed down either time, and both times he eventually got back up.
The first crash occurred when East Rowan visited the Falcons. Poteat chased Jackson Justus’ opposite-field triple straight into the right-field fence and actually got his glove on the ball.
The other incident occurred when Poteat unsuccessfully challenged the brick wall in foul territory at Staton Field in West’s rematch with East.
It’s not like Poteat is crazy. He’s just one of those people who is seriously competitive when he steps between the lines.
“If the ball is there, my mindset is I have to go get it,” Poteat said.
The last thing Graham wanted to happen was for Poteat to get hurt, but at the same time he couldn’t do much to rein him in. It’s that wide-open, aggressive style that makes Poteat who he is.
“We had a several hard-playing players on our team, but Lee played the hardest, as hard as anyone I’ve ever seen,” Graham said. “He’s not scared of anything.”
Poteat was more important to a West Rowan team that won the South Piedmont Conference than his .233 batting average would indicate. He walked more than he struck out, didn’t mind getting hit by a pitch occasionally and put together a solid .384 on-base percentage. His speed put pressure on infielders and outfielders and forced a lot of errors. He hit five doubles, drove in 17 teammates and scored 21 runs as the Falcons’ leadoff man.
“He was really good for us,” Graham said.
Poteat will take his fearless nature, his strong arm and his exceptional speed to St. Andrews, a university in Laurinburg that competes at the NAIA level. The Knights were pretty good this season — 29-25 — and Poteat can help them get better.
“I’m just glad to be getting the chance to keep playing baseball,” Poteat said. “Baseball is the sport I love the most and getting a chance to play baseball in college is all I’ve really wanted.”
Poteat tried a lot of sports at West and participated to some extent on the varsity level in six different ones.
He played a lot as an outside linebacker for the football team last fall.
In the winter months, he stayed busy, throwing the shot put in indoor track and practicing with the swim team, but mostly wrestling.
Poteat weighs 180, but he wrestled at 195 pounds. That’s not usually recommended but it didn’t stop him from experiencing serious success on the mat.
“I was first in the county and second in the South Piedmont Conference,” Poteat said.
Poteat heaved the shot 44 feet in an outdoor track meet this spring — that mark would’ve won the Rowan County Championships — but he focused on baseball.
He’s an athlete, strong and fast. If West had hockey and lacrosse teams, he’d probably be their best guy in both.
Poteat’s father, Rodney, played American Legion baseball for Rowan County, but Poteat credits his mother for most of his athletic ability.
His mother, Leslie Bradway Poteat, is in the Catawba Hall of Fame. She starred for the Indians in volleyball from 1986-89, setting a school record for blocks and racking up 861 career kills. She won the 1990 Lomax Award that is given to Catawba’s top female athlete.
Poteat is currently the starting right fielder for the Rowan Legion team.
He also played a significant role in Rowan winning the state championship last summer when he drove in 17 runs in only 65 at-bats. That was the third-best RBI rate on the team, behind only Juan Garcia and Riley Myers.
Poteat’s best days in baseball lie ahead of him. That’s one thing everyone agrees on.
“If you just watch him work out, watch him run and throw, you can see what a high ceiling he has,” Graham said. “He’s played a lot of different sports in high school. Once he concentrates on baseball full-time in college, he’s going to be very good.”