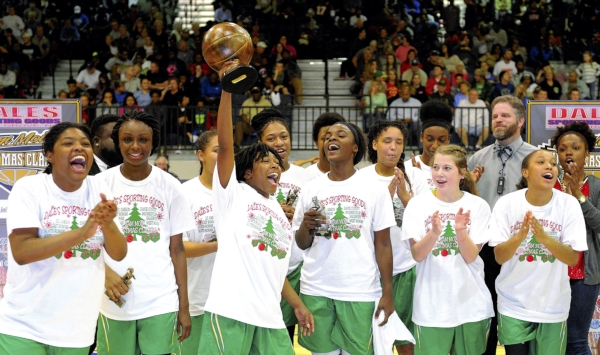 JON C. LAKEY / SALISBURY POST ... North Rowan’s Tre Allen hoists the tournament trophy after the win over Carson last night at Goodman Gym. The titlel was the Cavaliers’ second in three years, having also won it in 2013. North coach Brian Lytton stands in the rear.

SALISBURY — A tough schedule meant a No. 4 seed for North Rowan, but the Cavaliers earned the championship of the Dale’s Sporting Goods Sam Moir Christmas Classic with an impressive run.
“We had the toughest draw possible,” said North coach Brian Lytton, who coached his second title team in three years. “Davie, then West, and then Carson. I’m very proud of my team.”
West entered the tournament unbeaten. 4A Davie was one of the favorites. Carson (10-3) was the No. 2 seed.
Wednesday’s championship game was, by far, the easiest. North won 66-54, but it was a lot more one-sided than it sounds.
North (8-4) led 9-0 before Carson’s McKenzie Gadson made a free throw. North was flying and led 18-1 when Taylor Wiggins made the Cougars’ first field goal with 2:20 left in the first quarter. By the end of that quarter, it was 22-3, and the championship trophy could’ve been handed to Lytton.
“We had so much energy,” said tournament MVP Special Washington, who scored half of her 20 points in the first quarter. “We were fast-paced. We came out running. I was able to get into the middle and I made some shots.”
Speed was the basic gameplan. Carson hasn’t played North in several years, and Lytton was confident North’s quickness would be at a different level than anything Carson had seen.
“We got the start we wanted and we got the tempo we wanted,” Lytton said. “The thing is we’ve come out of the gate like that a few times, but we couldn’t sustain it. This time we kept it going. Carson is very good and Brooke Misenheimer is a tremendous coach. We just kind of shocked them.”
North also demolished the Cougars with offensive rebounding. Volleyball star Farmer and hurdles phenom Brianna White are special athletes, and they were leaping higher and quicker than the Cougars.
“We looked shellshocked early on,” Misenheimer said. “We made some bad decisions and we rushed things on offense, but the No. 1 thing that beat us was their offensive rebounding. We’re not going to out-jump many people, so we had to box out better than we did. Every time they’d miss, they were getting multiple opportunities for a stickback.”
Washington, Farmer and Aundrea Godfrey did the bulk of the scoring for the Cavaliers, as they did throughout the tournament. Farmer had 15 Wednesday and 51 for the tournament. Washington scored 47 in the three-day event. Godfrey had 17 on Wednesday and a total of 39.
“Our girls jump so well,” Lytton said. “They just go get it.”
The unsung hero for North was defensive stopper Tre Allen. Her assignment was slowing down Carson point guard Olivia Gabriel, who had scored 41 points in the Cougars’ two tournament victories.
“She’s a really good player,” Allen said. “It was my job to try to keep her under control. I tried to force her to go to her left.”
Lytton wanted to hug Allen at halftime. Gabriel had zero points at the break, and North led 30-15.
If not for Gadson, Carson might have lost by 50. She had 11 of the Cougars’ 15 first-half points. The freshman wasn’t awed by the big stage.
Gadson finished with 24 points, scoring in transition, fighting for boards and getting to the line often enough to make 12 free throws.
Gabriel did her damage after the game was decided, but she showed what a talented player she is. She scored 20 in the second half, as the Cougars swapped buckets with North.
“We found out after we settled down that if we just set a screen and made a pass we had layup opportunities,” Misenheimer said. “But it took us a long time to settle down.”
North took a 14-point lead to the final quarter. Gadson and Gabriel shot a ton of free throws late, but Godfrey and Washington were able to answer consistently with buckets.
It was a classic team effort from North. Washington, Farmer and Godfrey all were MVP candidates.
Washington wasn’t jumping up and down over being chosen for the award, but she had a great explanation.
“I wasn’t worried about winning MVP,” she said. “What I wanted to win was a championship.”
•••
Joining Washington on the all-tournament team were Farmer, Godfrey, Gabriel, Gadson and Shenell Pharr, who led East to third place. Carson reserve Alijuandra Street won the Ronz Award given in memory of Ronnie Gallagher, the longtime Post sports editor who died in 2013. The award is given for hustle, spirit and sportsmanship.