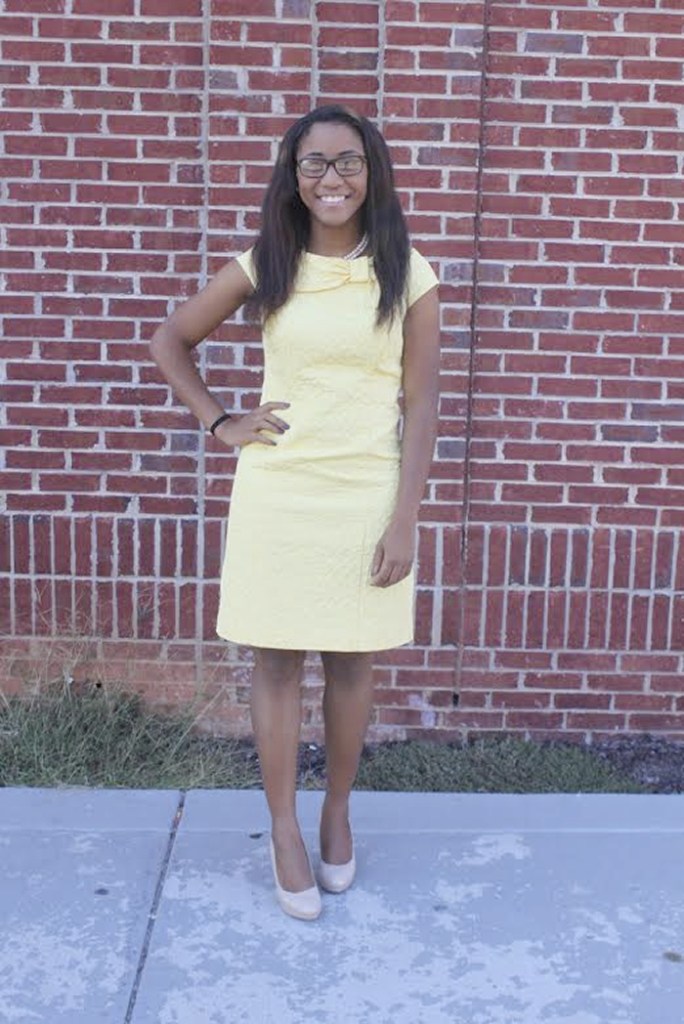 Jenna Wright knew she would attend college, but is having more success at Livingstone College than even she thought possible. Photo by Kha'mel Smith

SALISBURY – When Jenna Wright was a student at Parkside High School in Salisbury, Maryland, she wasn’t confident she’d be able to perform well in college.

“I always knew she had the ability, but I think she lacked the confidence in believing she could do it,” said her mother, Melva Polk Wright. “Her guidance counselor, Anthony Giddens, was very instrumental in encouraging her.”

It’s a good thing he did.

During her high school days Wright wasn’t sure she could effectively handle the rigors of college, but in her short time at Livingstone she’s proven unequivocally that she can.

She’s the Sophomore Class President, a member of the Concert and Gospel choirs, is in the Honors Program, tutors classmates in writing and Spanish, is Miss Gospel Choir, serves on the African Methodist Episcopal Zion Student Council and is a national officer for the Varick International Christian Youth Council, the youth branch of the A.M.E. Zion Church’s Christian Education Department.

And she maintains a GPA above 3.0.

“Jenna is the wholesome, well-rounded, intelligent student that will meet the demands of any institution she’s attending,” said Giddens, chairman of Parkside’s guidance department. “She was always neat, controlled, polite, pleasant and mature in all situations that she encountered. She was the type of young lady that every parent would want for a daughter and all admissions counselors would like to have on campus.”

Wright, like her mother, gives Giddens a lot of credit.

“Mr. Giddens helped me in every way possible with scholarships and with college applications,” Wright said. “He really helped push me. I’m smart, but I wasn’t always as motivated as I should have been. He … made going to college a reality for me. I knew I would always go, but he helped me grasp the fact that I had a lot more opportunities than I thought I did.”

Whether Wright would attend college was never a question. Her mother is principal of West Salisbury Elementary School in Salisbury, Maryland. Her oldest maternal aunt retired as a vice principal. Another aunt was a special education teacher. And her older sister, Mallory, is a fourth grade teacher in Baltimore.

“Growing up in a family of educators, she always knew the expectation was that she was going to college,” her mother said. “During her freshman and sophomore years in high school she did okay, but it was just okay. I think she started realizing in her junior year that … she had to step up her game, and so she did.”

“Over the past two years, Jenna Wright has been a key component in the Concert Choir,” said Dr. DaVaughn L. Miller, chairman of Livingstone’s Music & Theatre Arts Department. “Her sense of musicianship, which gives insight into her level of accountability, is a prime example of her commitment to the success of the choir and other scholastic pursuits. Jenna is an asset to the concert choir and to Livingstone College.”

She said as long as her grades don’t slip, she’ll continue her involvement in many extra-curricular activities.

“You have those of us who work extremely hard trying to be successful here, and then you have students who don’t do much of anything and care more about extra-curricular activities than they do their schoolwork,” Wright said. “There’s nothing wrong with participating in extra-curricular activities, but the primary reason we’re here is to get an education, to earn our degrees and to command our rightful place in today’s global society as Dr. Jenkins always says. Unfortunately, at times, some students here and at other colleges and universities throughout the country lose sight of that.”

An English major who hopes to become a guidance counselor and a minister, Wright said her inspiration to be involved in so many different activities comes from her mother and her father, Jeffrey Wright, a corrections officer.

In addition to everything she does, she also delivers the college announcements at the school’s weekly assemblies inside Varick Auditorium. At a recent assembly, Dr. Faleese Moore Jenkins, wife of Livingstone’s president, commented on how much she was impressed by Wright’s delivery.

That’s good news to Wright’s mother, who said she thought Livingstone would be a good fit for the younger of her two daughters.

“I always thought Livingstone would be a good place for her because it’s a little bit bigger than her high school,” she said. “Of course as her mother I’m more prejudiced about her than most, but whatever she commits to she does it to the best of her ability. She oftentimes doubts herself, but she really has a lot of gifts and graces. I’m very proud of her and am happy to see that she’s making her mark in North Carolina.”