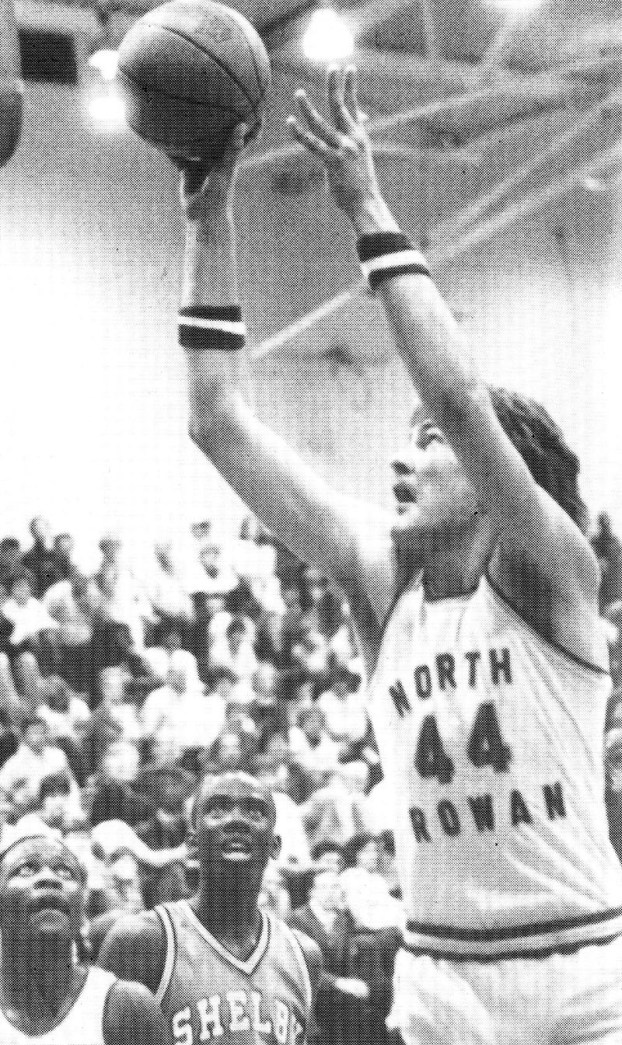 Salisbury Post File Ralph Kitley (44) played basketball at North Rowan in the 1980s, including on the Cavaliers' 1986 state championship team, before going on to play college basketball at Wake Forest. Kitley is one of seven people being inducted into the Salisbury Rowan Sports Hall of Fame as part of the class of 2015.

SALISBURY — When the 15th Salisbury Rowan Hall of Fame class is inducted Aug. 9, green and gold will be the colors of choice at the Salisbury Civic Center.
It’s almost going to be a North Rowan High reunion. All four new Hall of Fame members elected in the regular ballot by the Hall of Fame committee have ties to the Spencer school.
Elected were longtime North Rowan basketball and baseball head coach and football assistant Bob Hundley; Kendall Alley, who starred in football and baseball for the Cavaliers before playing on Clemson’s national-championship football team; Ralph Kitley, who played on North Rowan’s 2A basketball state champions for Hundley before heading to Wake Forest; and Andre Godfrey, who graduated from North Rowan before becoming a late-blooming basketball star at Catawba.
China Grove High graduate Dean Sheetz and the late Oatten Fisher, a graduate of J.C. Price High — two bona fide legends — were elected in the “seniors” round of voting.
Elected as the annual Horace Billings Award winner for decades of positive contributions to sports was West Rowan head track and assistant football coach Ralph Ellis.
A graduate of Francisco High School near the N.C.-Virginia line, Hundley walked on and became a catcher for UNC baseball’s team. After military service and two years of teaching in Surry County, he joined the North Rowan coaching staff in 1969.
Hundley’s 15-year record as head baseball coach included 136 wins. His 1976 team won the North Piedmont Conference championship and was WNCHSAA runner-up.
Hundley enjoyed his greatest success in basketball. His teams were 274-189 in 18 seasons and he stands second all-time in Rowan boys basketball coaching wins behind still-active Mike Gurley.
The 6-foot-10 Kitley averaged 13.5 points for Hundley’s greatest hoops squad — the 1986 edition of the Cavaliers that went 29-2 and put together a 17-game winning streak. Both losses were by a single point. Kitley scored 19 in the Western regional final vs. Albemarle and had 17 in the 2A title game vs. Ayden-Grifton.
Kitley played in 108 games for Wake Forest from 1987-90 and scored a career-best 22 against N.C. State.
Alley was a standout for North Rowan and Rowan County American Legion baseball teams and also competed in basketball for the Cavaliers.
His best sport was football. He reeled in passes from Bobby Myers in 1977-78 and became the first player in Rowan County history to achieve 1,000 career receiving yards. He also starred for North Rowan at safety and was named to the Shrine Bowl team.
Alley was a receiver on Clemson’s 1981 national championship football team and played on two more top-10 Clemson teams in 1982 and 1983.
He went on to earn an MBA and embarked on a successful banking career.
Godfrey entered North Rowan at 5-foot-5 and 110 pounds and played little for Hundley’s varsity team until he was a senior. By then he had grown to 6-1 and was the No. 4 scorer for Hundley’s 22-6 1985 club behind juniors Antione Sifford, Jimmy Kesler and Kitley.
Godfrey kept sprouting skyward after entering military service. He stood 6-foot-6 when Catawba coach Sam Moir, at the urging of Godfrey’s friend Andrew Mitchell, offered a scholarship in 1988.
Godfrey became one of Catawba’s greats, scoring 1,673 points. He was All-SAC first team twice. He was SAC Player of the Year in 1992 and SAC Tournament MVP in 1991. He’s in the Catawba Hall of Fame.
Fisher graduated from J.C. Price in 1943 after a stellar career for coach S.W. Lancaster’s Red Devils and became one of the first black professional football players in Canada. He was an all-league tackle three times in the 1950s and had a 92-yard interception return for a touchdown that made him Interprovincial Rugby Football Union Player of the Week.
The 5-foot-8 Sheetz starred in baseball and basketball in high school for China Grove and at Piedmont College in Demarest, Ga.
His greatest athletic days have been in golf. He won the Charlotte City Amateur three times and he had high finishes in the N.C. Amateur and U.S. Senior Open. He’s won Legends events and he’s been a winner in the Labor Four-Ball Memorial Tournament at the Country Club of Salisbury.
When he was 56 in 1990, Sheetz played in the U.S. Senior Open with Jack Nicklaus — Nicklaus was making his Senior Open debut — and Bob Charles. Billy Casper had withdrawn from the event, and Sheetz was the alternate who got the phone call to replace him.
Sheetz led Nicklaus at the turn, but Nicklaus finished at 71, while Sheetz shot 74.
Ellis was a multi-sport athlete at West Rowan in the early 1970s. The Livingstone graduate has contributed mightily to youth track in Rowan County and he’s been an integral part of West Rowan athletics as a coach in football, basketball, tennis and track. He’s coached football for 33 seasons.
The seven Class of 2015 inductees will bring the Hall of Fame’s membership to 94.