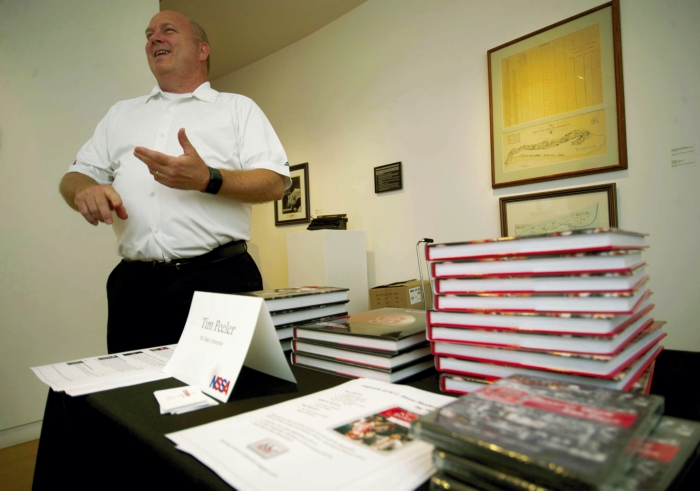 JON C. LAKEY / SALISBURY POST Tim Peeler was one of the authors signing books on Sunday afternoon as part of the NSSA weekend events. Peeler, a former Salisbury Post sportswriter, is managing editor of GoPack.com, website for N.C. State athletics.

SALISBURY — Tim Peeler’s boyhood sports memories include N.C. State’s 1974 national basketball championship,
That was a championship fueled by sky-walking David Thompson, who had played his high school ball at Crest, about 15 miles from where Peeler lived in the town of Vale, in western Lincoln County.
Thompson, a great shooter who made defiance of gravity routine with his 44-inch vertical leap, did more than anyone to make Peeler a permanent fan of the Wolfpack.
“I can remember vividly 1973, the very first Super Sunday on TV, the Maryland-N.C. State basketball game followed by the Washington Redskins-Miami Dolphins Super Bowl (VII),” Peeler said. “A bunch of us went out in the backyard and played football between the games.”
For the record, N.C. State, ranked third in the nation, beat No. 2 Maryland, 87-85, before Peeler went out to play.
Peeler has watched hours of film and says 300 or more of Thompson’s two-point college rainbows would’ve been 3-pointers had he come along when the current 3-point line was in effect.
“And they weren’t allowed to dunk when he played,” Peeler said. “But I think that just made Thompson even better. He found other ways to score.”
Peeler, in Salisbury on Sunday for a book signing at Waterworks Visual Arts Center, a part of NSSA festivities, was in second grade for that 1973 Super Sunday and he was a third-grader when the Wolfpack claimed its first national championship.
Peeler was a senior in high school in 1983 when coach Jim Valvano guided the basketball program to a very improbable national title No. 2, with an interesting cast of characters.
“I was accepted for college at UNC and Georgia Tech, but that 1983 championship made it an easy decision for me to go to N.C. State,” Peeler said.
Peeler’s career as a sportswriter began at the Salisbury Post in 1987. It was followed by award-winning newspaper stints in Greenville, S.C., Durham and Greensboro. He covered the 1996 Summer Olympics in Atlanta, six Final Fours and seven Masters golf tournaments.
In 2006, Peeler was named managing editor of GoPack.com, the official website of the N.C. State athletics.
Peeler’s first book — “Legends of N.C. State Basketball” — was published in 2004.
He’s written two more.
“When March Went Mad,” the story of Valvano and the 1983 Cardiac Pack, was published in 2007.
“N.C. State Basketball: 100 Years of Innovation” arrived at bookstores in 2010.
A new publisher contacted Peeler last summer about producing a revised version of “Legends of N.C. State Basketball,” and Peeler jumped at the chance to make some adjustments.
“It was a chance for a redo and for some needed updates,” Peeler said.
That new book release includes a foreword by head coach Mark Gottfried (replacing Herb Sendek) and includes brand new chapters on old-timer Sam Ranzino, recent hero T.J. Warren and 1970s legend Hawkeye Whitney.
Whitney, who led the Wolfpack in scoring from 1978-80 and scored 26 points on Senior Day against UNC, was incarcerated when Peeler was working on his original “Legends,” but he’s been restored to the Wolfpack family.
While the Duke-UNC rivalry garners the national media attention, Peeler is well aware N.C. State coach Everett Case was the one who popularized college basketball in North Carolina. Case raised the bar for Duke and UNC.
“Case was a guy who never even played high school or college basketball, but he had the biggest impact of anyone on Tobacco Road basketball,” Peeler said.
Peeler said the coolest Wolfpack basketball fact that he has unearthed in his endless hours of research is that James Naismith himself attended the 1925 Indiana high school state basketball tournament and presented the championship trophy to Case’s Frankfort High team.
Somewhere along the way, Peeler acquired the title of “unofficial historian” of N.C. State athletics.
It’s a title he wears with pride.
“And the best thing about being the unofficial anything is no one can fire you,” Peeler said with a laugh.
While Wolfpack basketball has been close to his heart since his first TV experience with David Thompson, all N.C. State sports matter to Peeler.
“All my books so far have been basketball, but there are a lot of great Wolfpack stories to be told,” Peeler said. “The next one might be football.”