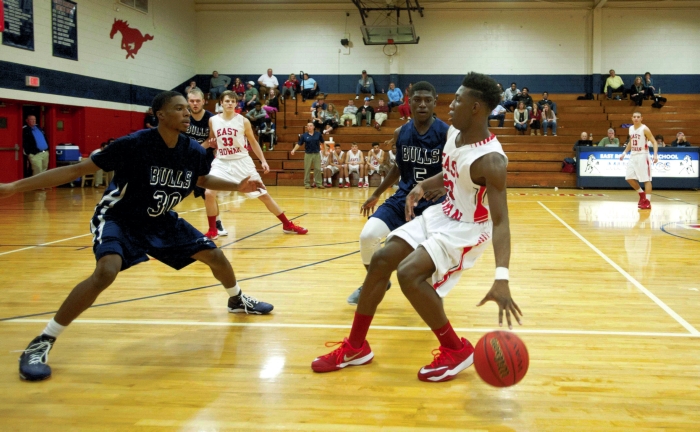 “Stowe eats us up — that’s a Division I guard with a Division I body,” Ledbetter said. “And we seem to lose Metcalf in transition a lot. He just doesn’t miss.”

Stowe, a senior, scored 21 points to lead Hickory Ridge’s Ragin’ Bulls to a 63-49 South Piedmont Conference road win against the Mustangs on Tuesday. The bad news for Ledbetter is that Metcalf, who buried five 3-pointers, is only a junior and will visit the East Rowan gym at least one more time.

“Those two are a two-headed monster for us and they’re usually an inside-outside monster,” Hickory Ridge coach Robert Machado said. “Stowe on the block and Metcalf on the wing can create some tough matchups.”

East Rowan (2-2, 1-2) didn’t play especially well but it fought and stayed in the game with what may be the team to beat in the SPC.

“We’ve gotten some big wins early that have kind of put us in the driver’s seat in the conference,” Machado said. “Especially winning at Concord because that’s something we haven’t done before as a program.”

The Ragin’ Bulls (5-1, 4-0) won their fifth straight. They lost their opener to Cuthbertson when they were still missing some football players.

Stowe scored eight points in the first quarter as the Ragin’ Bulls jumped out to a 17-11 lead.

Metcalf hit two second-quarter 3-pointers for the visitors, but they were offset by 3-pointers by East Rowan’s Seth Wyrick and Ian Bradshaw. The Mustangs got to the break in pretty good shape — down 29-23.

The third quarter proved decisive. When Bravon Goodlett hit a 3-pointer early in the period, East Rowan was within in 29-26, but a Metcalf 3-pointer, a breakaway dunk by Stowe and a three-point play by Stowe pushed Hickory Ridge’s lead back to double digits.

Hickory Ridge kept the Mustangs at arm’s length the rest of the way, even with Bradshaw scoring eight of his 13 points in the fourth quarter. Logan Shuping hit two 3-pointers in the second half for the Mustangs.  Samuel Wyrick had his hands full trying to slow down the much bigger Stowe, but he rebounded well and scored nine points.

“Trey has a good team that can hurt you in a lot of ways,” Machado said. “But defense is our calling card and we did a good job of staying in front of their drivers and kept them from getting to the rim.”

Ledbetter pointed at some effective 1-3-1 zone by Hickory Ridge as a key to the game.

“We can shoot and we made six 3-pointers, but we also had 22 turnovers — and that’s just a crazy number,” Ledbetter said. “There was a stretch where we stopped them on six straight possessions, but then we’d turn it over.”

Machado believes his team has the maturity and the chemistry to finish off close games this time. The Ragin’ Bulls lost a lot of tight ones a year ago.

“That’s a really good team we played tonight,” East Rowan’s Seth Wyrick said. “We played really hard, but we’ve got to do a better job in the fourth quarter.”