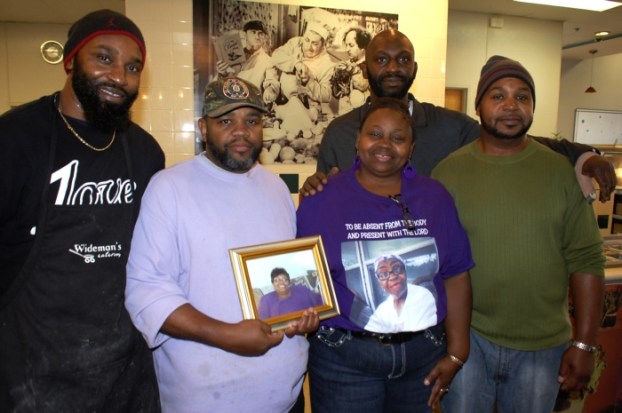 Mark Wineka/Salisbury Post The late Edith Wideman's five children honored her memory Thursday by cooking and serving Thankgsgiving dinner to those in need. From left, the children are Brian Wideman, Steve Wideman, Edith April Grate, Bernard Wideman (in back) and Willie Wideman Jr.

A Thanksgiving for Edith: Siblings honor late mother by feeding those in need

SALISBURY – Steve Wideman decided his Firewater Restaurant and Bar should feed the needy on Thanksgiving because his late mother, Edith, told him so.

In fact, Edith Wideman seemed to be speaking to all five of her children Thursday.

Everywhere you looked during the free Thanksgiving dinner Thursday, there seemed to be a working member of the Wideman family wearing a T-shirt with Edith’s picture on the front and some personal message about her on the back.

The back of son Brian Wideman’s T-shirt spelled out “Edith” and gave a word for each letter in his message: “Every Day I Thank Heaven for blessing me with my mother Edith.”

“She just was about love,” oldest grandchild Shena Bennett of Concord said. “That’s why we’re doing this today — feed the homeless and just show love, because she loved family and big gatherings.”

“Love” and “caring” were the words repeated over and over Thursday about Edith Wideman. The day was emotional for her children because this was the first Thanksgiving without her.

“Thanksgiving was always a time we got together as a family,” Steve Wideman said. “We didn’t have a lot, but we always had something.”

Edith Wideman died March 15 in Salisbury after a long struggle with cancer. She often split her days between home in Tabor City and her second home in Salisbury with Steve, who has lived and worked here full-time since playing football and graduating from Livingstone College in 1992.

His brother Bernard also lives in Salisbury, while brothers Brian and Willie Jr. and sister April live in or around Tabor City. But Salisbury is their second home, too, thanks to a catering business they all established when Edith first learned her diagnosis.

Steve says the siblings started Wideman’s Family Catering as a way to help pay for their mother’s cancer treatment and medical bills in general. They would put proceeds from catering affairs into an account, which Edith could access for whatever she might need.

Even with his recent purchase of the Firewater Restaurant and Bar at 122 Avalon Drive, Steve still caters, and he automatically calls on his brothers and sister.

But feeding the needy on Thanksgiving was more than a catering event. It was what their mother would have wanted them to do.

Bernard Wideman said his mother’s mantra was “everybody’s somebody.”

“She always taught it was best to help someone, and put God in everything you do,” he added.

Wilbert Grate, her son-in-law, said Edith got him into church, took him into her family and became a mother to him.  It was Grate who gave the blessing before Thursday’s meal at the restaurant. “If you came to her house,” Grate recalled, “she fed you. She did some wonderful things. She was a good woman.”

Jackie Harris, resource development and marketing director for the Rowan County United Way, is a close neighbor, friend and now surrogate mother to Steve Wideman. Over the years, she also had become best friends with Edith, and she said nobody has yet gotten over her death.

“She was a wonderful person and believed in helping others, although she was poor herself,” Harris said, describing Edith as “salt of the earth.”

Steve Wideman said he tried to spread word about his Thanksgiving meals through church, Rowan Helping Ministries and the Department of Social Services. Though the crowd coming through the front doors was small, the family wasn’t worried about eventually getting food to people who needed it.

Steve Wideman has long been partners with fellow Livingstone College graduate (and football star) Troy Veale in One Love Developmental Services, which operates group homes and specailizes in mental health needs.  He took over the Firewater Restaurant in September and had a grand opening Oct. 9. It’s open most days for lunch and dinner and has special events such as Soul Food Sundays and karaoke Wednesday nights. Wideman said it’s been an entirely new and interesting venture for him.

“Steve is just the nicest guy in the whole world,”Harris says. “The whole family is.”

But Steve wanted Thanksgiving to be about his mother. “She had no enemy,” he said. “She could find the good in anybody.”

He laughed, remembering how Edith had taught the words of  “King Jesus” to his foster child and how he’ll sometimes hear him singing it in the mornings. His son can’t carry a tune, Steve said, but he still sings out, “All I need is King Jesus.”

Willie Wideman Jr., the oldest sibling, said his mother wanted her children to be hardworking and able to find the good in everyone. “When people don’t like you,” he said of his mother’s philosophy, “love them anyway.”

Willie said his mother also hoped her children stayed close with each other, and somehow she made it come true. It would be difficult to find five siblings who are this close long into adulthood.

Edith Wideman was diagnosed with cancer in 2012. Much of her care fell to daughter April, who stayed with her mother both in Tabor City or if she were visiting Steve, in Salisbury.

Since her mother has died, April has gone back to using her first name more often.