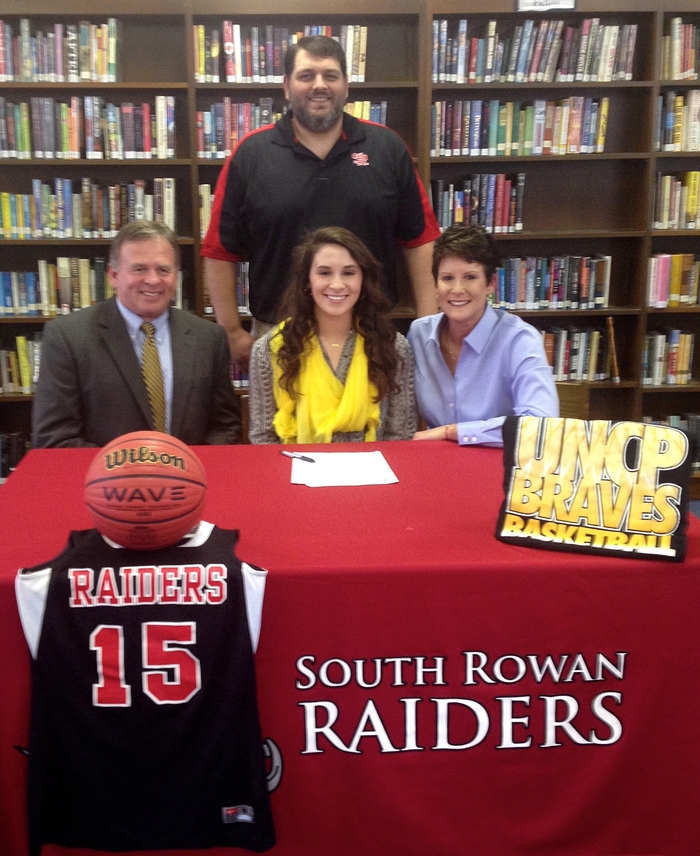 She’s played 71 games in three seasons and has failed to score in double figures in just six of them. She’s been worth 18.3 points per game for the Raiders over the past three seasons. That’s remarkable scoring for a 5-foot-7 girl who isn’t super-quick and isn’t a great 3-point shooter.

“They hand you the scorebook at the end of the night, and it’s like, ‘Oh, Avery had 25,’ ”  South Rowan coach Jarrod Smith said. “That night she scored 43 against Northwest Cabarrus (the school record), I took her out because we had a big lead and I was shocked to find out she had that many. She gets those quiet 25s because there’s nothing fancy about layups, putbacks and free throws, but when you keep making layups, putbacks and free throws, it adds up.”

After she graduates from South Rowan , Locklear will head to UNC Pembroke to make more layups and free throws. It may not happen immediately, but don’t bet against her tossing in quiet 25s for the Braves.

Locklear was recruited by Division I schools, but there are reasons she signed a National Letter of Intent with Division II UNC Pembroke. On the court, it should mean a chance to play a significant role early.

“I really wanted to go somewhere where I could make a difference,” Locklear said.

The first basketball camp Locklear attended was at UNC Pembroke, and there are also longstanding family ties to the university. There’s a Locklear Hall at UNC Pembroke named for her great-grandfather Anderson Locklear, a famed educator. Locklear’s Native American heritage is meaningful to her and is the reason she takes the floor with her dark hair in braided pigtails.

“The recruiting process was exciting and it was fun, but as soon as I went down there and toured the campus, I knew that’s where I wanted to go to school,” Locklear said.

Locklear was the Rowan County Player of the Year in 2014 after scoring 20.2 points a game and leading a turnaround from 6-18 to 18-10. She also was all-district. She’ll be a combo guard in college. She usually plays off the ball for the Raiders with speedy Sylvetta Bost as the point guard, but Locklear plays the point for her Charlotte-based AAU team.

“She’s strong, she’s got a longer wingspan than people realize, and she’s a very good athlete,” Smith said. “But natural ability is only going to take you so far. What separates Avery is her work ethic. Go to the gym on a Saturday morning and she’ll be in there shooting. Go to the gym on Monday afternoon, and she’s in there working on her game. She’s also smart. She doesn’t make a lot of mistakes. Even as a freshman, she didn’t make a lot of mistakes.”

Locklear scored 418 points in the 2011-12 season, a school record for a freshman. She scored 458 as a sophomore. She had 424 as a junior, despite missing seven games with a broken bone in her right (shooting) hand.

She practiced left-handed until she was cleared to return to action and didn’t miss a beat. Her comeback was a 23-point outing and she averaged 26 points in South Rowan’s three playoff games.

Locklear is a year-round athlete and has earned letters in volleyball, soccer and track in addition to basketball. Somehow she finds time to be a stellar student. She owns a 4.667 GPA and ranks in the top five in South Rowan’s senior class. She aspires to be a history teacher down the road.

“I’ve always made A’s in high school,” Locklear said. “That’s something that’s always been expected. I knew if I didn’t keep my grades up, I wouldn’t be allowed to play.”

Locklear has scored so often for so long that she is now in the company of South Rowan’s all-time greats — Tracy Connor, Jill Cress, Wanda Watkins, Beth Miller and Janetta Heggins. Locklear enters this season with 1,300 career points. Cress set the record in 1997 with 1,529. Connor and Watkins are the only South Rowan players with 500-point seasons to their credit. Locklear could reach those heights this season if she stays healthy and the Raiders play enough games.

Still, Locklear’s goals are team goals. Her thinking is that if the team wins often enough, the records take care of themselves.

“I’m just going to enjoy my senior season because I’m playing basketball with my best friends,” Locklear said. “All I want is for people to look back one day and say that we were a great team.”