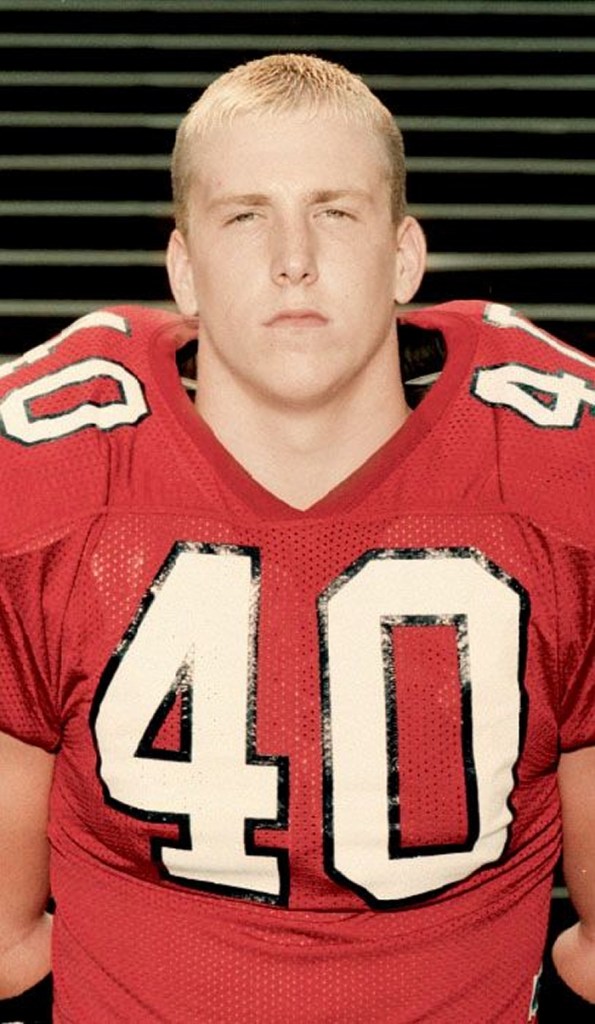 “I saw a banner there: 1997 3A State Champions, 15-1,” Guessford said. “I just grinned because the one loss was us. They were state champions, a great team, and you always want to be that team holding the banner. But we beat the state champions. In a way, that makes us champions too.”

“Second, first and third in the SPC,” Guessford recalls.

Jeff Safrit is best remembered as the coach of the Mustangs’ 1995 state-championship baseball team, but he also knew football and coached sound teams. Safrit was blessed with special players such as Adam Horton, Guessford’s running mate at linebacker. While the 210-pound Guessford was big and fast. Horton was larger and faster. After his senior season, Horton was defensive MVP of the Shrine Bowl.

“We ran the ball consistently and controlled the line of scrimmage,” Guessford said. “We were strong defensively, We held some teams to negative rushing yards.”

The 1997 season was epic because the South Piedmont Conference had three streamrollers. A.L. Brown and Concord were great, as they often are. For a change, the Mustangs were right there with them.

East Rowan lost early to North Rowan’s aerial show, but the Mustangs were 7-1 and 5-0 in the SPC when they headed to Kannapolis on Oct. 24. The Wonders were 8-0, and in Nick Maddox they had the state’s marquee player.

“There was a big buildup, and then the atmosphere was like nothing I’d ever experienced,” Guessford said. “Electric.”

“Josh Brady overthrew him — somehow Poole caught it,” Guessford said. “Then we tied it up, and before we kicked off, coach Safrit and coach Mise (Darrell Misenheimer) were screaming at us to get the ball back. On the kickoff, Adam stripped the return man, I saw the ball on the ground and jumped into a pile of bodies. I came out with the ball and carried it to the sideline. I handed it to the coaches, and said, ‘Hey, we got the ball back.’”

East Rowan took the lead. With the Mustangs ahead 28-21, it came down to a goal-line stand by the defense that Guessford can still recite play by play. On fourth-and-goal, everyone in the stadium knew Maddox would get the ball. He got it on a toss sweep.

“Maddox was unbelievable, but Isaiah Oglesby made a great play,” Guessford said. “He contained Maddox, turned him in, and we stuffed him.”

The Mustangs owned one of the great wins in school history, but they were battered and bruised when they hosted Concord a week later on Halloween. And Concord had its own marvelous back in Jamie Scott.

“Scott had legs like tree trunks,” Guessford said. “And their quarterback (Anthony Gray) was another huge, strong guy.”

Concord beat East Rowan 35-21 and had first place all to itself for one week. On the final night of the regular season, however, A.L. Brown won at Concord, and the SPC had three teams with 7-1 records. East Rowan was a conference champion, well shared a championship, for the first time since 1974.

The coaches drew for playoff seeds. The Wonders received the shortest straw and hit the road to play unbeaten Asheville in the first round.

The record book shows A.L. Brown made a tremendous run to the 3A state championship, and those were the days before state football playoffs were subdivided. The one blemish came against Guessford’s East Rowan team that was eliminated in the second round by a Kings Mountain squad coached by the late Ron Massey.

Guessford was an all-conference linebacker, although he was an even better baseball player. He was Rowan County Player of the Year as a junior, slugging 12 homers.

Guessford suffered a terrible injury in American Legion baseball between his junior and senior years, breaking a leg on a slide into third base. Still, he returned for his senior football season.

“I was out 66 days and spent that whole time rehabbing, basically living at the ortho clinic,” Guessford said. “But I didn’t miss a football practice or a game.”

Guessford played baseball at Wingate and Surry Community College before becoming an All-America outfielder at Averett. He played pro baseball and was a hitting instructor at UNC Asheville, but his career path eventually led to teaching and coaching youngsters. Now he’s come back to Rowan County and has coached winning baseball and football teams in his three years at Erwin.

“I preach to our young athletes that education has to come first, but I still encourage them to follow their athletic dreams,” Guessford said. “I want them all to be champions.”