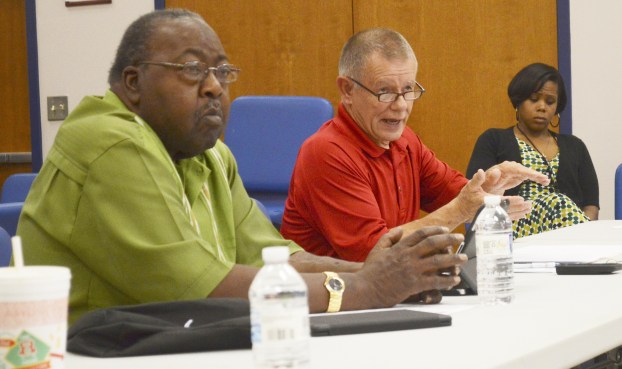 With the Rowan County Board of Commissioners planning to fill portions of the former Salisbury Mall with the Department of Social Services and Health Department, the Sheriff’s Office is one potential department to fill the vacated space on East Innes.
For months, county government has considered moving DSS and the Health Department, located on East Innes Street, to the mall. Board of Commissioners Chairman Jim Sides, who is also the DSS board chairman, on Tuesday briefly mentioned the possibility of moving the Sheriff’s Office to the East Innes facility, especially because it would vacate space in the Rowan County Justice Center and still remain relatively close to downtown.
“In a quick fix, we could resolve some very critical space needs for the court system without having to build,” Sides said. “There are critical needs downtown that we cannot meet with new buildings. It’s just not feasible to build downtown and have to build a parking deck along with that building when we could just move the sheriff’s department.”
He added that the Sheriff’s Office move has been considered before and the Rowan County Jail would remain in its current facility. If approved, it would be the second facility change for the Sheriff’s Office. The commissioners already approved using the Maintenance Department’s facility on Airport Road for Sheriff’s Office storage.
The Sheriff’s Office move was raised during a Tuesday DSS board meeting, when the board was discussing a space needs study.
DSS Director Donna Fayko said the department’s leadership team would meet Wednesday and complete a space needs questionnaire — though it’s certain that DSS is running out of space.
“We’ve particularly pointed out that we’ve outgrown the space and cubicle space for staff we’re hiring,” Fayko said. “We’ve actually converted one of our file rooms. We’ve also outgrown our parking lot and have no parking for our customers and sometimes our staff.”
Repeatedly, Sides and DSS board member Arnold Chamberlain said commissioners failed when first planning the current DSS and Health Department buildings.
Sides said the total number of clients for DSS in 2006 ranged from 16,000 to 17,000 per year. Presently, he said client numbers are 26,000 per year for food stamps and 28,000 per year for Medicaid.
Chamberlain, a previous county commissioner, said he was initially proud of the planning that went into the DSS building after it was finished.
“I would have never seen this coming, not this quickly,” Chamberlain said, talking directly to Sides. “I would’ve looked at this parking lot and said there’s no way we’re going to fill up the parking lot out there. Wherever it goes Jim, the board of commissioners is going to have a decision to make and it’s going to cost a lot of money.”
Sides and Fayko both said the 2008 economic recession was a primary reason for the increase.
Even if numbers return to pre-recession levels, Sides said the space at the mall, now called West End Plaza, wouldn’t be wasted. DSS currently occupies a space that’s 40,000 square feet. The space that Sides proposed moving DSS into is 80,000 square feet. Much of the space could be used for hundreds of boxes of records, which are currently stored in the county’s maintenance facility on Airport Road.
Sides said the company conducting the feasibility study — Adwardchitects — is finished or nearly finished talking to each county department. Afterward, he said the company would analyze data and commissioners would likely develop a capital improvement plan based on data.
Sides said though moving DSS to the mall and replacing it with the Sheriff’s Office would be a good idea, the space needs study should be completed before any final decisions are made.
He estimated that the study would be complete after the new crop of commissioners take their positions.
Contact reporter Josh Bergeron at 704-797-4246