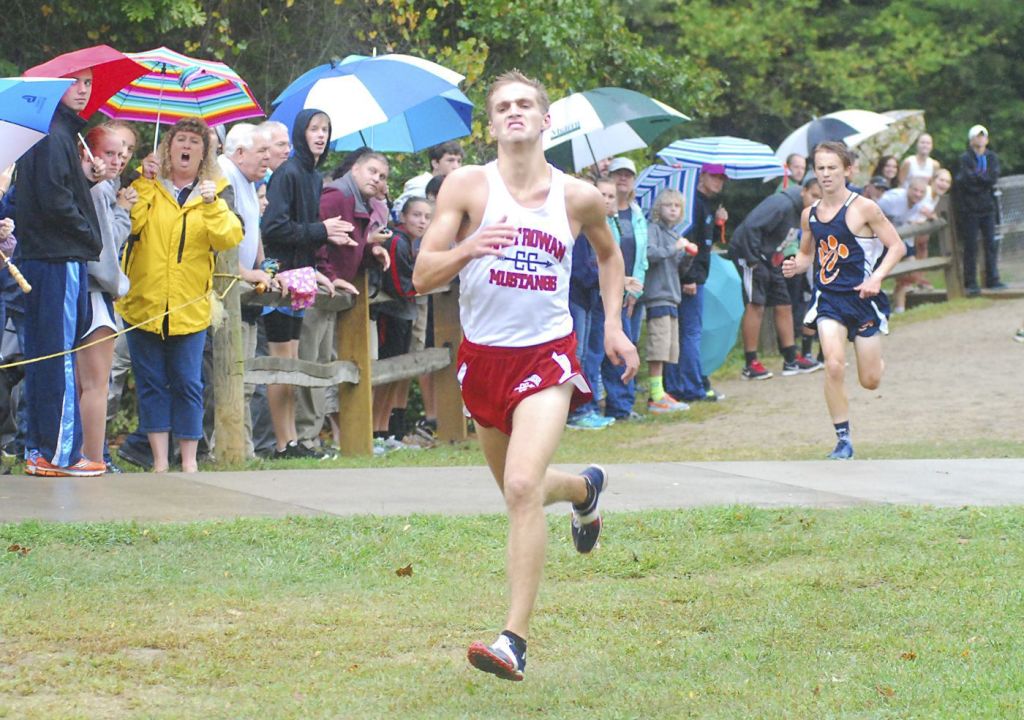 SALISBURY — East Rowan’s Conor Honeycutt and Carson’s Zachary Marchinko set a blistering pace Wednesday in the Rowan County Cross Country Championship at Dan Nicholas Park. The course record was 16 minutes, 16 seconds.
That mark was blown away by both racers. Honeycutt crossed the line first in 15:53 after a good kick at the end.
“My big motto is do it for God and not anything else,” Honeycutt said. “That’s big on my mind, getting full potential of what God is giving me. That’s a little more of what I’m leaning toward this year.”
Marchinko was not far behind Honeycutt, finishing in 15:55.
Honeycutt, though, could not have run that fast if Marchinko was not there to push him during the race.
“There’s no way to run that time by yourself,” East Rowan coach Rick Roseman said.
Just like it was in the boys race on Aug. 26, Honeycutt and Marchinko dueled from the start of the race. They were running first and second within 30 seconds of the gun. They stayed together for the first two miles of the race. Honeycutt kicked it into high gear at the start of the final mile.
“We took off pretty fast. We just kind of stayed consistent,” Marchinko said. “…We both pushed it pretty good. We were both moving pretty good after the second mile mark.”
Carson was the big winner on the chilly, rainy day on the trail. The Cougars took five of the top ten spots in both the boys and the girls races to claim both team championships. The Cougars’ victory snapped a six-year streak of the Mustangs winning the county boys championship. Carson was the runner-up team the past three years. Marchinko said he was more happy about the team winning the overall title than finishing runner-up or breaking the course record.
In the boys race, Carson’s Garrett Ingold, East Rowan’s Trevor L’Hommedieu and Carson’s Nick Cox rounded out the top five.
Honeycutt was not the only runner to sweep the pre-county and county meets. West Rowan’s Josie Heglar was the winner of August’s pre-county meet, and on Wednesday she was also first to the finish line in the county championship. Heglar finished the race in 21:05.
“It feels really good [to win], especailly since Rebecca Parker came in first always, while she was in high school,” Heglar said. “She was always there to push me, and I really feel like that motivated me to go faster and win.”
Heglar hung near the front at the start of the race. She made her move to take the lead at the mid point of the race.
“I saved all my energy up and just pushed,” Heglar said.
Carson’s Jesse Nichols finished second, more than 20 seconds behind Heglar. Places third through fifth, respectively, were Faith Blume from East Rowan, Faith Faller from East Rowan, and Korbynne Hill from Carson.
Follow Adam Houston on Twitter at @AdamRHouston.