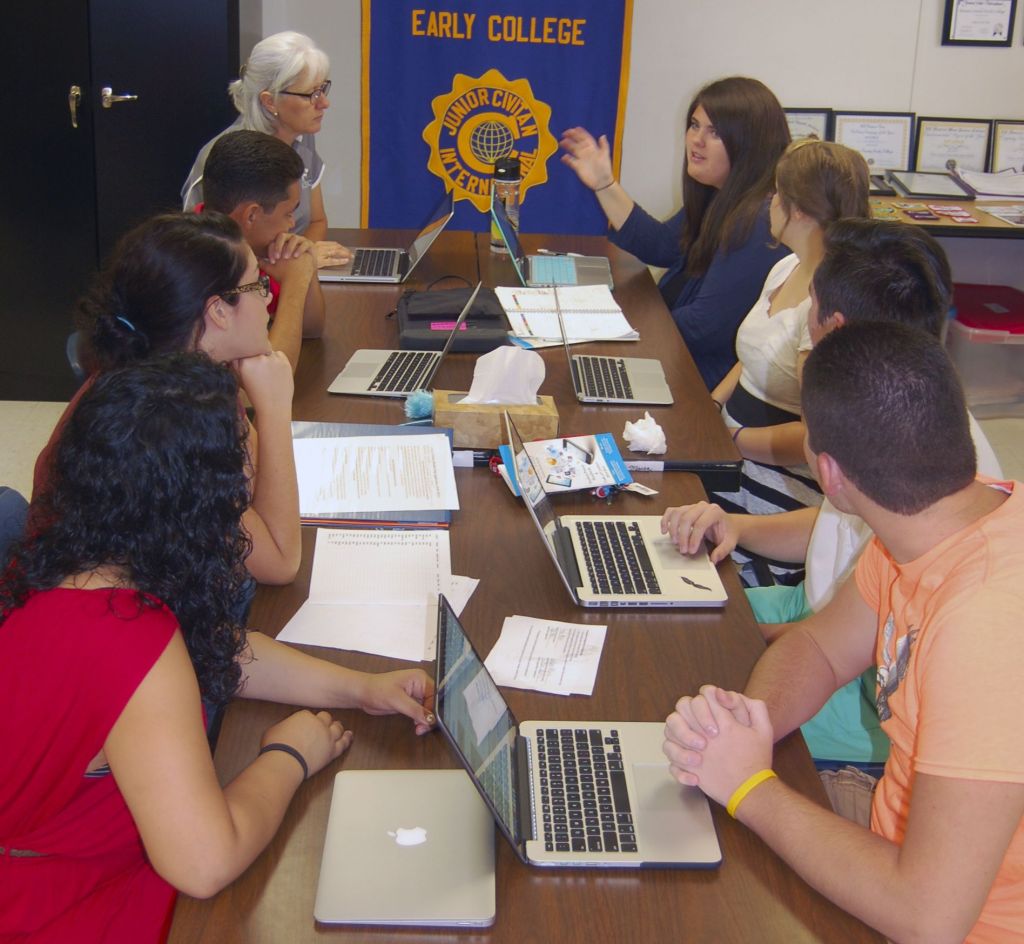 Rowan County Early College might be small, but their Junior Civitan Club is a force to be reckoned with.
“We are small, but mighty,” said former adviser Meredith Abramson.
The club is ranked as the second best international club of the year, its president is the international female Junior Civitan of the year and its former adviser was inducted into the Civitan International Hall of Fame.
“It’s truly an amazing club here,” said principal David Miller. “It’s beyond them just wanting to do things to put on their college applications.”
The club’s membership has skyrocketed. The group was chartered in 2009 or 2010, and Abramson took it over in 2011. The club grew from 15 members in 2011 to 58 last year. This year, that number has jumped to 89 — more than one-third of the school’s entire population.
“It’s just continued to grow,” Miller said.
The Junior Civitan club is an offshoot of Civitan International, a community service club, for students.
Rowan County Early College Junior Civitans took part in 67 community service projects, putting in more than 1,000 service hours at projects including the Special Olympics, BlockWork and plays at the Norvell Theater.
The Junior Civitan Club has had a significant impact on President Brandy Kegeris’ life.
Kegeris, a Hurricane Katrina survivor, moved to North Carolina after the storm devastated her home state of Mississippi.
She was shy, but former Junior Civitan adviser Abramson sought Kegeris out. She told Kegeris she thought she would make a good fit for Civitan leadership, and encouraged her to run for office.
“I spotted Brandy as a freshman,” Abramson said.
Kegeris was responsible, organized, a good writer and a great communicator, she said. “She’s just a bright little beacon of goodness.”
Abramson said although Kegeris was initially “a little reluctant” to pursue a leadership position, “she has taken the ball and just rocked and rolled with it.”
Kegeris said she’s learned life skills and leadership habits from her involvement with the club.
“It allowed me to be able to speak in public,” she said, adding that the early college experience “opens a lot of people up.”
Kegeris is highly involved in the group on the school, regional and international level.
“I feel like I live and breathe Junior Civitan,” Kegeris said.
Kegeris attends many regional and international events each year, including regional officer training, Sno-Do, the Dance-a-thon and the international convention.
Kegeris was the North Carolina West District public relations coordinator last year, and this year, she is the district’s governor.
To top off her lengthy list of honors and awards, however, is the highest honor a Junior Civitan can receive — Kegeris is the international female Junior Civitan of the year. With the honor, she received a Junior Civitan International Honor Key and a $1,000 scholarship.
Kegeris isn’t the only member of the Rowan County Early College Junior Civitan family to receive an international award at the international convention this summer — Abramson was inducted into the Civitan International Hall of Fame.
The early college’s Junior Civitan Executive Council nominated Abramson for the honor.
“She really got this club organized,” said Iris Bonilla, the club’s vice president.
Prior to leading the club at the early college, Abramson led the club at East Rowan High School beginning in 2004.
Abramson ended her decade as a Junior Civitan adviser late last year when she left the early college for a position at Erwin Middle School, where she began her teaching career.
“It was a very difficult decision for me,” Abramson said, adding that her decision ultimately came down to being able to be on the same schedule as her two daughters.